I talked about Desire Dungeon as a monster girl game to look out for back here.  It came out a couple of weeks ago, but not on the English dlsite.com for some reason.  I bought it off another site (gyutto) after the usual fun and games of figuring out where to enter my cc details on a Japanese language site. 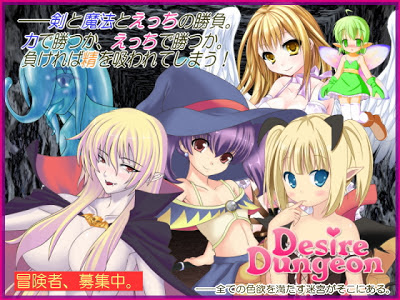 It’s another monster girl game-over-rape game in the vein of Monster Girl Quest and Violated Hero.  The key difference is there are also H-scenes for winning fights, so the poor put-upon hero can also get the goodies on winning for a change.  As the player also picks up new skills this way, some of which are required to beat certain monsters, you’ll want to do this for more than just the fap factor.


Combat (and armour/weapons) is divided between physical, magical and pleasure attacks.  Characters have a red health bar and a blue willpower bar.  If either runs out the fight is lost.  This gives extra dimensions to combat as the player has the choice of either winning conventionally or by turning the monster girl on until she gives in (which rewards the player with the monster girl’s H-scene and skill).  Each monster girl also has her own strategy.  For instance the angel will beat up the player,  but only to set up a devastating “heal” attack where she undos all the damage she inflicted while wiping out the player’s willpower bar.

It’s not an easy game.  Levelling up can only be done back at the town, and whenever you lose, the monster girl... ahem... slurps a level out of the player.  This means some caution is required.  It’s a proper game rather than a visual novel with naughty bits.  This means a little grinding is required, but thankfully not enough for it to get tedious.

There are 13 monster girls in all, each with their own “good” and “bad” H-scene.  As usual with these games, the makers are trying to cover a broad range of fetishes, positions and body shapes.  Both of the succubi-type monsters were a little too loli-esque for me, but this was made up for by a very busty vampire.  There’s going to be something here for most monster girl enthusiasts.


Overall, Desire Dungeon doesn’t have the epic storyline of Monster Girl Quest or the lushly drawn H-scenes of Violated Hero, but it’s a solid game with well-designed mechanics.  Definitely worth a look for monster girl fans and it should fill the gap while waiting for Torotoro Resistance to finish their epic.

An English translation doesn’t exist yet, but someone is working on it.
Posted by M.E. Hydra at 19:52