This game is by the same circle that made the Vampire and Hunter game I mentioned yesterday.  I noticed they’d done a couple of monster girl games and picked up the trial of the last one, Ordeal Quest, to check it out. 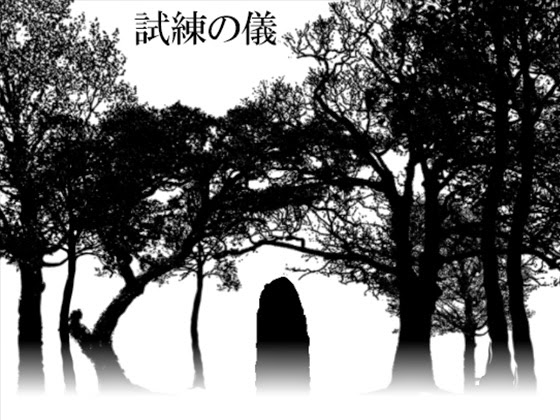 I wasn’t sure on this one.  The previous release from this circle had a ‘text only’ disclaimer and as the promotional guff featured no pictures of semi-naked hot anime girls I suspected this one might be the same.  Then in the trial I stepped on a cobweb and got the attention of an arachne.  She bound me up, gave me a sloppy silk handjob until I came, then—after I chose not to run away—sucked my cock up in her pussy for a bit of fucky fucky.  Her pussy locked in place around my erection so I couldn’t pull it out and she sent a tube down the inside of my urethra.  The purpose of this was so she could squirt a little adhesive plug right at the base of my cock.  This would only dissolve with the application of enzymes present in her pussy.  That would ensure that I could only ejaculate in her pussy and her pussy alone.  To help me come she squirted aphrodisiac silk threads in my face.  When I tried to hold my breath she kissed me and poured some aphrodisiac venom down my throat.  Then, as if the other stuff wasn’t already enough, she stabbed me in the ass with a stinger and pumped more aphrodisiac venom into my system to trigger a volcanic ejaculation.  That’s a spider gal with a lot of tricks up her silky sleeves.

As a writing aside, I’ve recently written a few arachne sex scenes that I thought were crazy imaginative (L’mactia in Succubus Summoning and her friends in a spin-off short story you’ll all have the pleasure of reading in January next year).  Once again Japan raises the bar in bizarre H-scenes (and we wouldn’t have them any other way).


Anyway, after that I thought I should give the full game a look.

It’s another stealth action RPG.  By this I mean it’s another game that strips out all the levels, turn-based combat and XP of usual RPGs to make an action game where the player has to get from one side of the map to the other without bumping into any of the wandering monsters.  If you do get caught, you get a text H-scene followed by a choice of escaping or letting your captor do even naughtier stuff to you (usually resulting in Game Over).

Unusually for a monster girl game there are a few non-anthro encounters.  Usually it’s the poor heroines that have to fend off tentacles, maggots, featureless blobs, dogs and other decidedly non-humanoid weirdness.  Ordeal Test has some featureless blobs (as opposed to slime girls), cock-sucking giant leeches and a giant daisy the hero can spunk a load over.  That’s one for equality I suppose.  As for monster girls we get the aforementioned arachne, cat girls, witches, stone statue traps, black magic users and some sort of sorceress at the end.


Ultimately it’s the lack of good artwork that lets the game down.  While the standard top-down RPG graphics are acceptable in other games for providing a quick framework to allow the player to explore the RPG world, they’re not what you’d ever describe as sexy.
Posted by M.E. Hydra at 09:35