The Nameless Slum and a lot of Rough

Part 9!  Yep, and I think we’re barely anywhere.  Why oh why did I say I was going to Let’s Play this.  Utter foolishless.  The start of the silliness can be found back here.

After picking up Vanilla and fulfilling the tasks for the Merchant job it’s time to get back on track for the main adventure.  This means going to the Nameless Slums to the west of Iliasberg and doing the investigations Amira asked of us.

The way to the Nameless Slums is through a tunnel to the south of the loli bandit hideout. 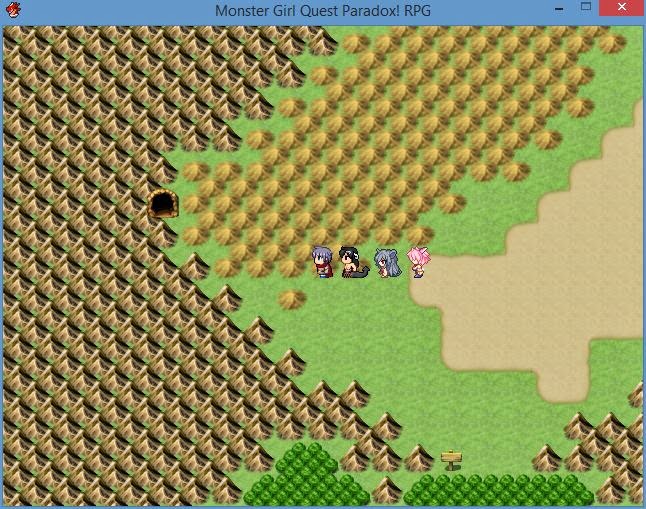 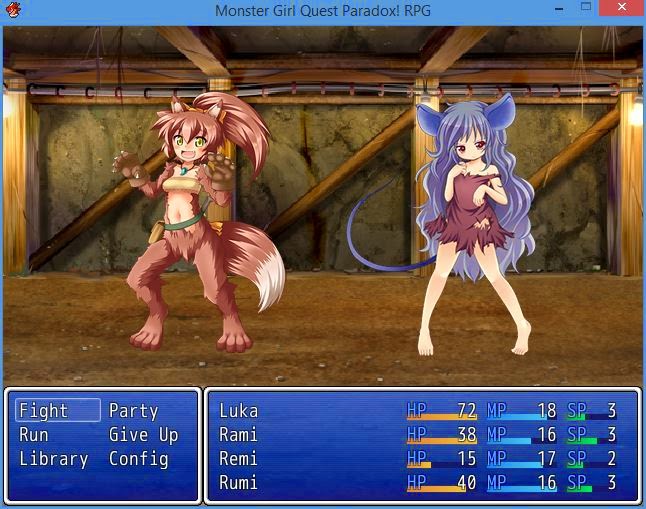 It’s a pair of new beast girls – a wolf girl and a fairly bedraggled rat girl.  Beast girls are weak to pleasure attacks as a wandering NPC informs us.  This is where Luka gets to put his pimp hat on and stand back while the imp crew reduce all his opponents to quivering orgasm with Melty Kiss.

The rat girl’s temptation attack is to flop on her back and say it’s the victor’s prerogative to violate her.

Yeah, right.  Like we’re really going to fall for… 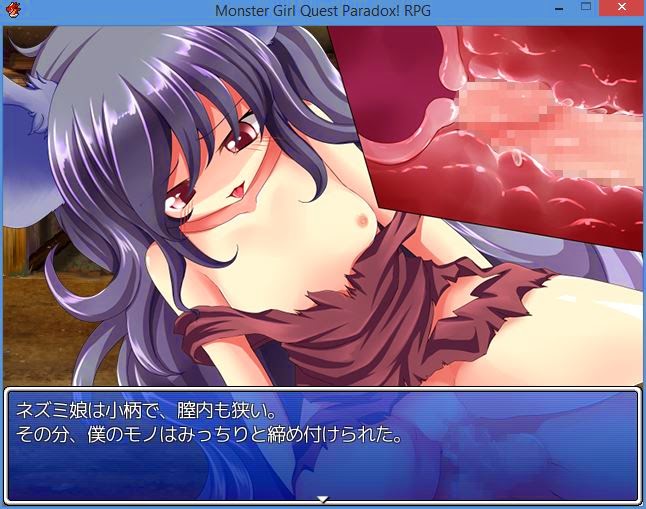 In the tunnels we run into Ilias.  Alice makes fun of the fact Ilias has recruited a slime girl, a monster girl, to help her.  I’m getting a Pokémon vibe from this.  I wonder if the one you don’t choose at the beginning functions as the Rival did in that series.

Ilias also adds to the mystery of Sonya by telling Luka she shouldn’t exist and that he should watch her carefully.  Poor girl.  Being told by your own goddess you don’t exist is enough to give anyone complexes.

This is also where giving Lime the Hard Job Wrist accessory from the very start should pay off.  By now we’re able to open up the blue chest in the tunnels and it contains a very useful early-game bow.

On the other side of the mountains is a new settlement that wasn’t in the original series – the Nameless Slums. 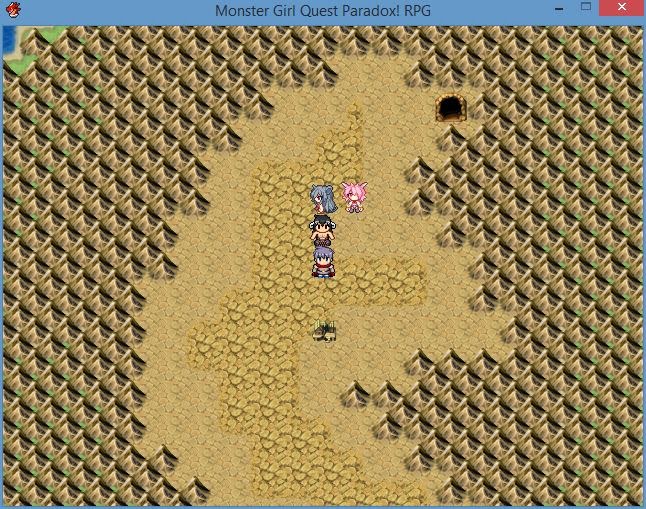 It’s a grotty and skanky place full of thieves and uh… crack whores? 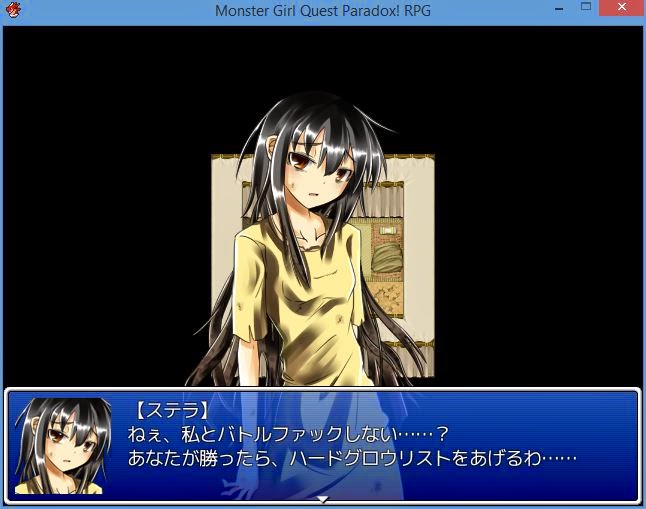 This is Stella, the BF opponent of this settlement.  She’s a little… um… rough.  I suppose some might be into that in a Posh-British-actor-in-the-wrong-side-of-town type of way. 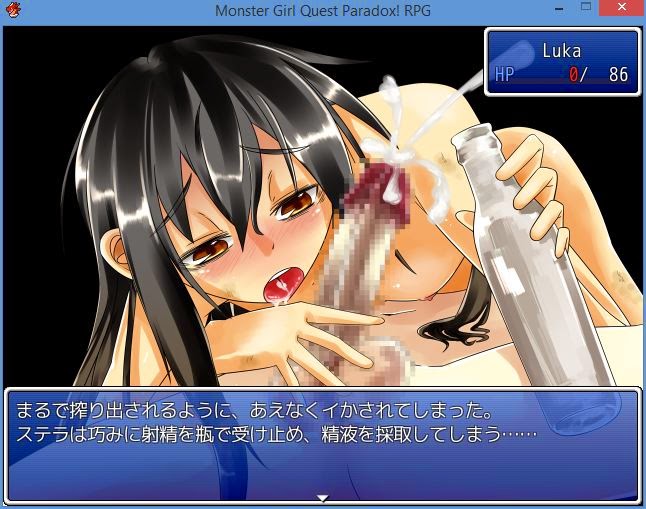 In the things-I’d-rather-not-think-too-much-about department, if you search Stella’s tent you’ll find a bottle of milk in one of the barrels.

No, don’t drink it Luka…

If you’ll excuse me, I’ll be over in the corner, barfing.

First off you need to go to the tent next to the Inn. 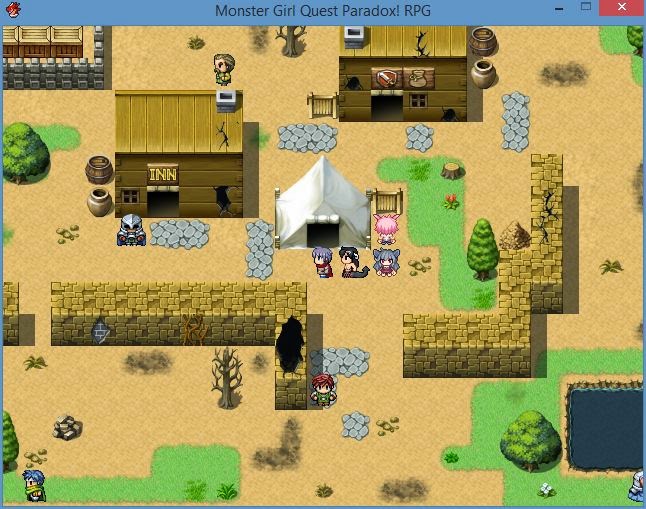 This contains another bad girl, but she won’t co-operate when it comes to talking about the phoenix tail feather trade.

You have to go to the pub and speak to the guy on the end in all the black. 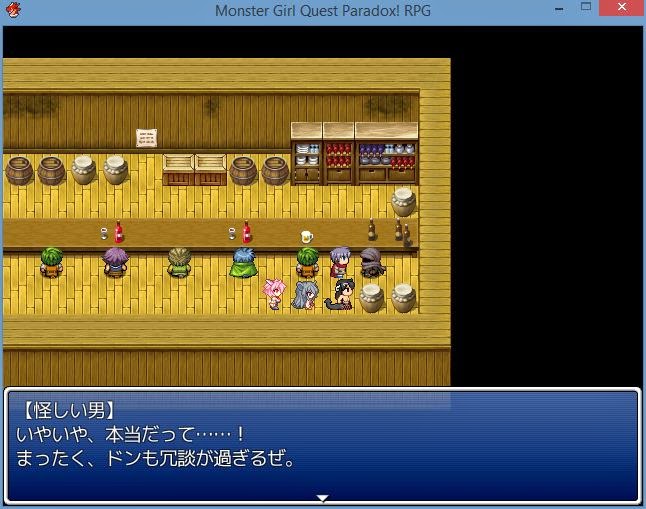 For 20G he’ll give you a password.  Then you go back to the tent and rub the breast of the skanky girl in the red boob tube (don’t ask – it’s MGQ-verse).  She reveals herself to be Don Dahlia – the mafia-style boss of the Nameless Slums.  A few more questions and she sniffs out Luka and friends as the useless amateur sleuths they are.

The next step is to go down to storehouse in the south-east of the Nameless Slums.  The door is locked and you’ll see Don Dahlia walk down and enter. 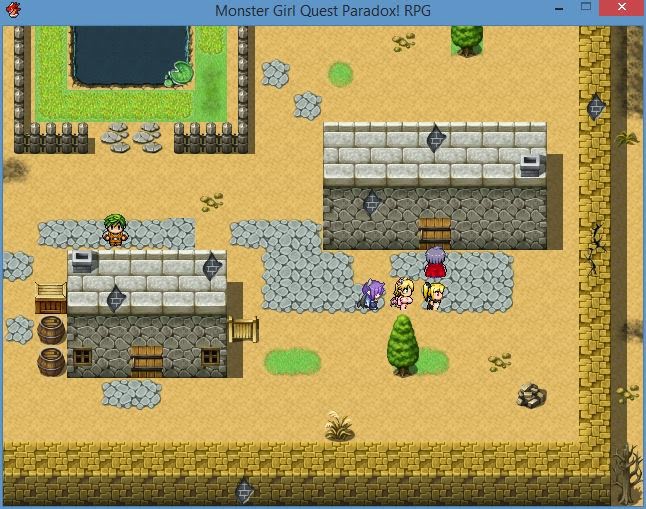 You need to steal her key.  Fortunately there’s a thief back at the pub who’ll do this for a fee. 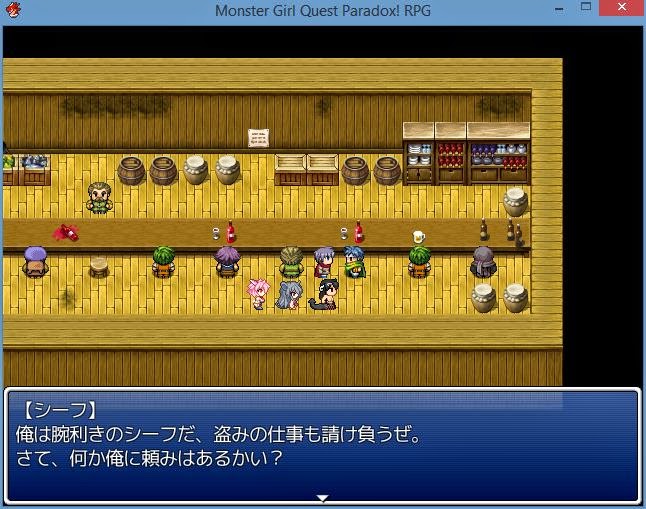 Sneaking into the store reveals some pots.  Don Dahlia comes in right after us and reveals the thing hiding in the sparkly pot is a baby phoenix.  We confront her and she sics baby firebird on us.  Boss fight.  It’s not too hard, although the inflammable Vanilla might go up in flames a few times depending on her level. 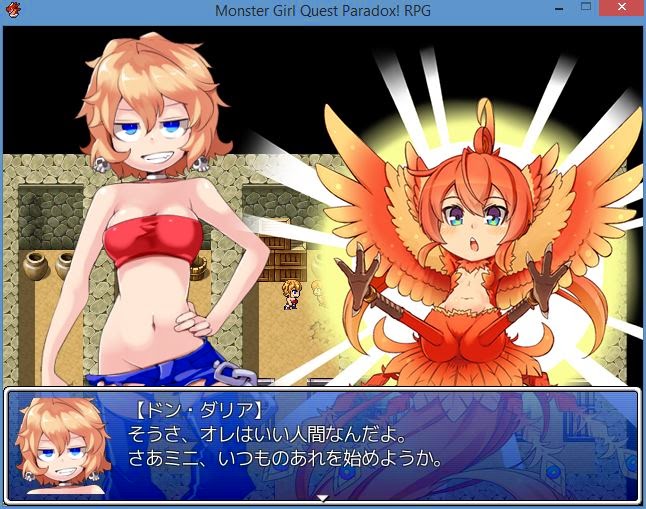 Baby phoenix’s temptation attack is to go defenceless and ask if Luka wants to rape her.  Yeah right, like we’re going to fall for that a second…

I was going to show the scene, but then realised that would leave me open to accusations of disseminating pictures of child abuse by the Perpetually Offended.  I suppose they have a point, the child phoenix does give us a thorough abusing.  (As with all of MGQs monsters, don’t be fooled by the baby-faced artwork – they’re all seasoned sperm extractors)

An interesting note – improving friendship does carry over after losses in boss fights.

Another note – what the hell am I doing raising friendship for a one-off boss fight with automatic recruitment right after?

Don Dahlia runs off, leaving the disposable phoenix behind.  Realising what she thought was friendship was abusive exploitation, Mini the Phoenix joins Luka’s rapidly expanding harem in the pocket castle.

...where Vanilla, the mercantile-obsessed vampire, tries to exploit her again until everyone shouts at her and she has to cut a fair deal.  This makes Phoenix Tail Feathers (the revive item) available from the castle item shop.  (to unlock it, talk to Mini in the castle with Vanilla in the party).

Don Dahlia now becomes available as a BF opponent, although you have to pay her a whopping 1500G (although this does at least seem to be a one-off payment).  She’s also much higher on the BF list of difficulty given it only takes two hits to empty Luka's HP gauge.  Her technique is armpit sex. 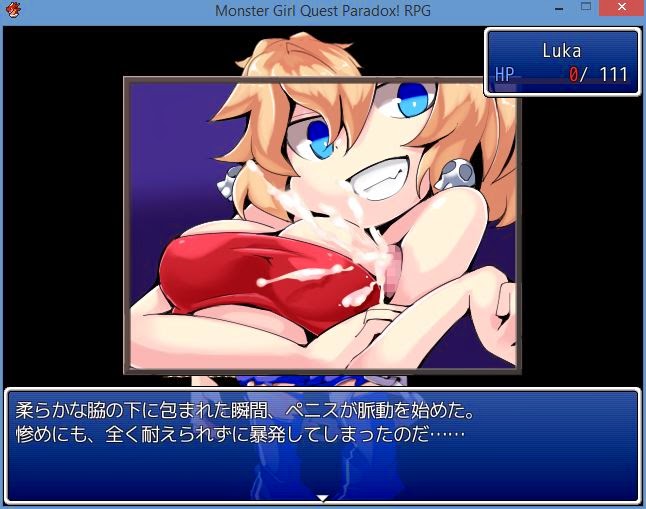 Meh, maybe I’m not as experienced as I thought.

And that’s enough musings for today.  Tomorrow we’re off to Pornburg, and yes, it is as bad as it sounds.

(There is a ruined castle to the south of the Nameless Slum which I forgot to mention.  I don't think it plays much of a part in this chapter as there are no encounters and half of the colour-coded chests require high thief levels to unlock.)
Posted by M.E. Hydra at 10:10