I'm back from my travels.  Unfortunately the journey back ran into a few more delays than I would have liked, so I missed a couple of days posting.  I should be back to a daily schedule now though.  Anyway, we're up to part 23 of the Monmusu Quest: Paradox walkthrough.  The first part of this insanity can be read back here.

Okay it's time to enter the Treasure Cave.  This is supposedly where the legendary pirate, Selene, stashed her treasures.  In there is the Neptune's Bell we need to be able to travel to the next continent (and meet lots of new sexy monster girls). 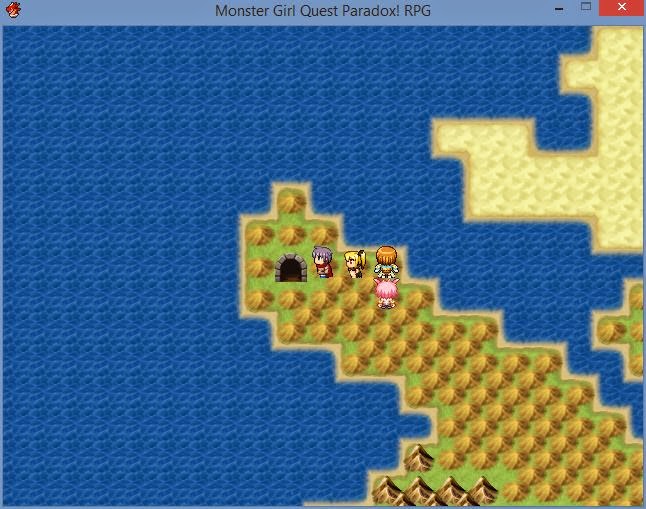 On entering the cave Alice repeats her dialogue from the first series.

This requires knowing a bit more of MGQ's background.  Tamamo, a kitsune, is/was Alice's tutor (and likes tofu).  This is where Luka first encountered her in the original series.  Tamamo was also one of my favourite characters from the first series.  Oddly, as an actual character rather than fetish fuel.  The set up and then reveal of what she actually is in the third chapter of MGQ is a moment of pure class.

The cave is full of yet more treasure chests to pillage. 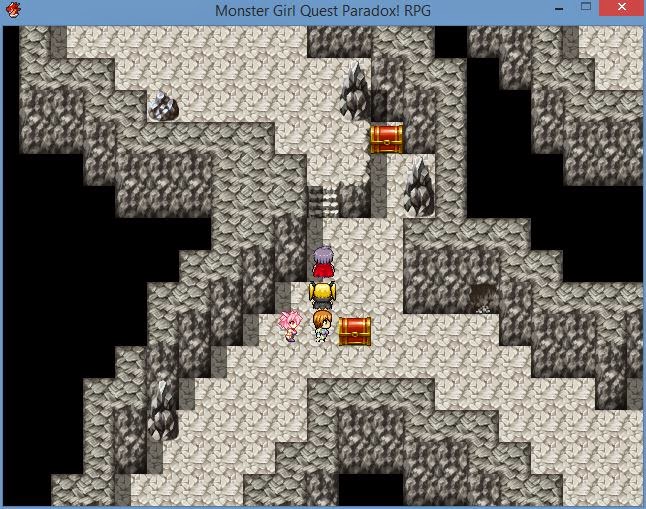 Ack.  I should have noticed that chest was positioned suspiciously. 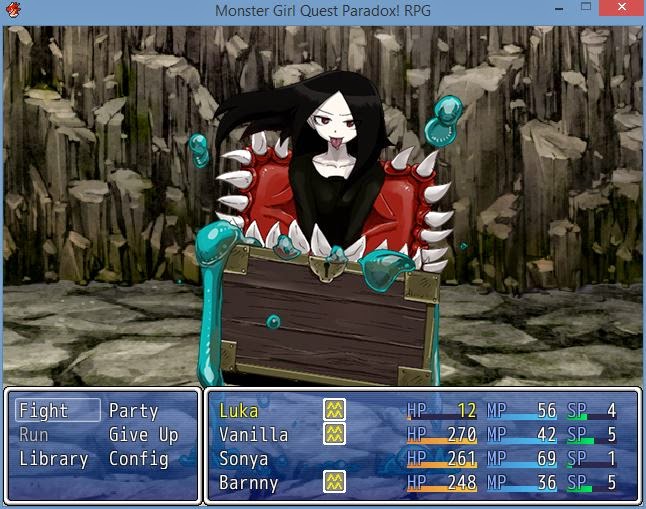 Mimic showed up in the first series in this location as well.  She was a hard optional fight if Luka was stupid enough to open a suspiciously positioned chest.  Like… uh… now. 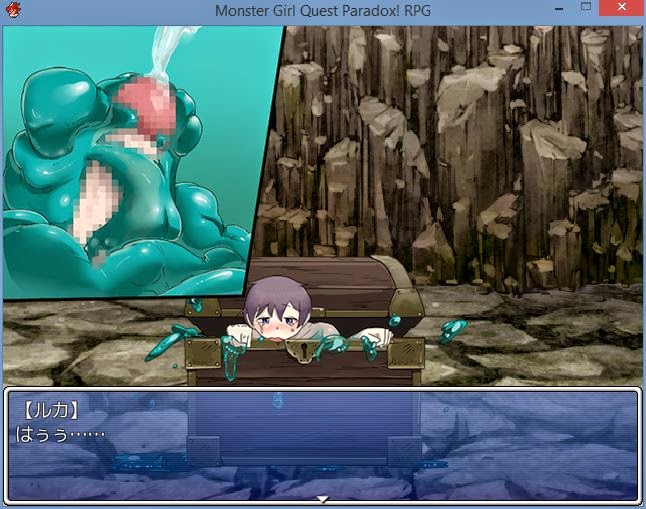 Jeebers.  Mimic is a total death machine.  If she's not swallowing party members whole, she's killing them outright with Death spells.  She also has a shriek attack that has a chance of stunning everyone in the party.  And she has two of these attacks Every Turn.  I don't think I had the slightest chance of winning that one.

Luka gets his dick glooped in digestive jelly.  Then the rest of him.  Then… let's leave it at that as it's all a bit icky.

Fair play.  The whole point of mimics and chest monsters in general in RPGs is to rough the player up so badly they never look at a treasure chest the same way again.  Objective achieved.

I respect the game for that.  Most of the time I'm being greedy and running around with a party full of flimsy merchants and a back line crippled with Bondage Ropes so they can all suckle on that sweet double XP.  This is the game letting me know it's not standing for any of that kind of shit, and I respect it for that.

(And when you finally manage to recruit Mimic be very careful when she asks you to step in her chest with her.  Remember kiddies, always make sure your monster girl is well fed with plenty of meat before having sexy fun with her.)

The other monsters are repeats from this section in the original series.  The unusual Meda are floating around (and are still utterly unrecruitable for me for some reason).  Joining them is a two-tailed kitsune and a spider girl I never really liked the artwork of the first time around.

The new addition this time is a serious-faced kitsune in red robes. 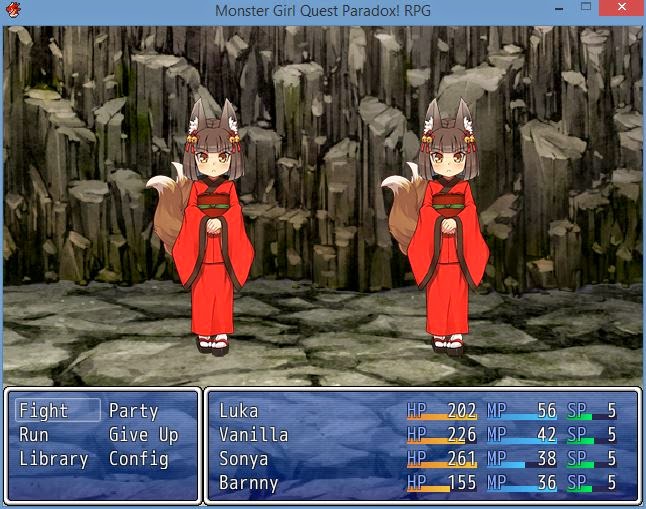 About halfway through exploring the caves I take a slight detour.  Lime picked up the Lockpick II ability and it's time to have a quick flythrough the places I've already visited to see what juicy treasures are hiding in the green chests.  The most interesting is an accessory found in the chest next to the Harpy Queen that gives all attacks a chance of inflicting instant death.  That combos quite nicely with hit-all weapons like boomerang and whip, and does speed up the fighty parts of the game.

As before we have Nanabi, the seven-tailed kitsune, waiting for us outside the treasure vault. 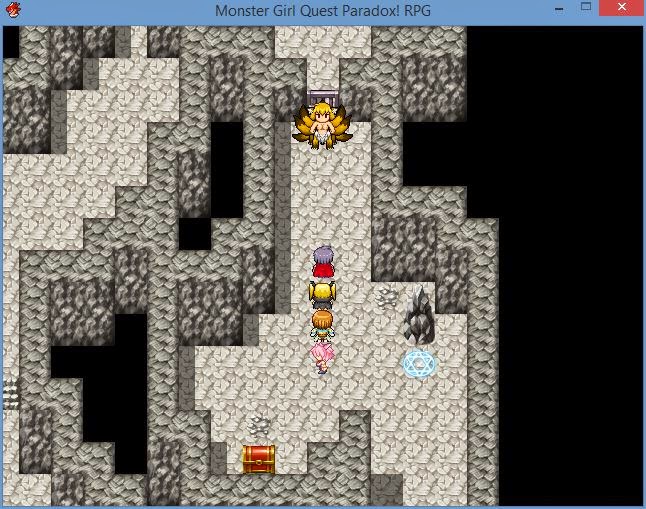 She recognises Alice, but it doesn't matter.  She has a job to do, which is keep us out.  Vanilla thinks it's impossible.  She might be right.  Barnny's first salvo of arrows does a whopping zero points of damage.  We are so fucked. 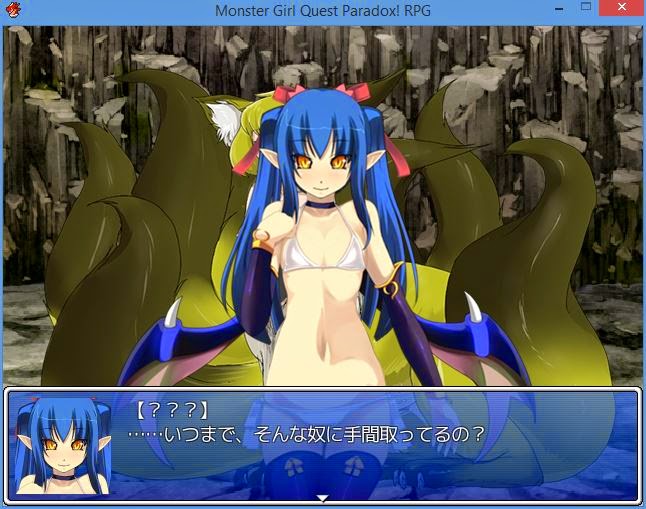 Who is this mysterious succubus that never appeared in the first game?

Alice the 17th does about 20,000 damage with a single special attack.

And then we have the first heavenly knight sighting of the Paradox series as Tamamo shows up (as she did in the first series).  Poor Alice (The 16th).  Tamamo seems to have rejected her for the new Alice on the block. 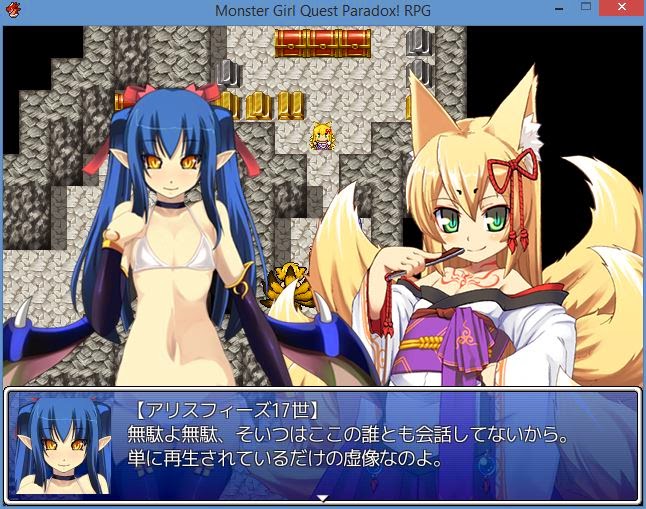 Now it gets a little confusing due to the vagaries of machine translation.  I think Alice the 17th knows Luka defeated Nanabi in a parallel world.

As if things weren't already complicated enough, the White Rabbit shows up.  It sounds like her ‘side' is trying to get Luka to follow the same path.  Alice the 17th is a wrinkle.  She shouldn't be here.  The White Rabbit tries to pull the same Time Stop trick to remove her, only for Nero to step in and intervene.

They vanish, time restarts and Alice the 17th keeps talking.

Hmm.  Alice the 17th, possibly from the original MGQ timeline.  Could she actually be Luka and Alice's daughter in that reality?

That adds a whole different complexion to her flirtatiously asking Luka if he wants to date.  Feh, what's a bit of incest to a succubus?  Does it still count as incest if it's with the parallel-world younger version of your Dad?  I mean, technically they're not the same person…

Yeah, probably best not to go there.  We pick up the Neptune/Poseidon bell from one of the chests and head back to Iliasport.

Tomorrow (and hopefully it will actually be tomorrow this time!) we'll catch a ship to continents new.

Oh, and if you're new to all this, as Anonymous mentioned in the comments yesterday, the original Monster Girl Quest has been updated with an official English version from the English side of dlsite.com.  I don't know if this is RogueTranslator's version or a brand new translation.

If you've already bought the original this counts as an update, so you should be able to download it for free.  (unless, like me, you were too impatient to wait and bought it off the Japanese side and don't have that account info any more)
Posted by M.E. Hydra at 11:45