A Text Play of ROBFEOY?

Yesterday I finally managed to pick up a legitimately-bought copy of ROBFEOY. 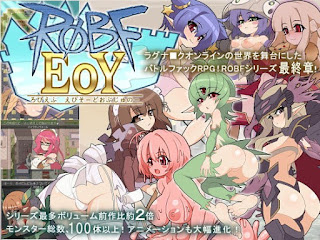 The ROBF series (stands for Ragnarok Online Battle Fuck) is a series of battle-fuck RPGs where the player squares off against various hawt monster girls and attempts to fuck them into submission.  Make the girl come and you win.  Run out of energy and it's a sexy-ever-after Bad End.

I rate the ROBF series as one of the better monster girl hentai game series, up there with the Monster Girl Quest and Violated Hero series.  ROBF's character artwork might look a little simplistic and cartoony in comparison to the other two, but more than makes up for it with the animations.  They are largely only simple sprite tweens, but they're very effective at making the sex scenes pop to life.  The artist likes curves and is very good at giving them appropriate... ahem... bounce.  Together with the consistent art style, the quality of these scenes push the ROBF games above most of their competitors.

The monster girl designs are more vanilla in comparison to Monster Girl Quest.  It's not quite all animal ears 'n' tail only, but you won't find anything like the brain-melting concoctions MGQ throws at hapless Luka.  Whether this is a good thing or a bad thing will depend on what reaction you had to those brain-melting (and Luka-eating) monster girls of MGQ, especially in the third chapter (with artists like Delphinus and Xelvy given free rein to go crazy).  Compared to that ROBF will either seem like a relief or a little tame.  Personally I wish there were a few more weirder monster girls, but I love how ROBF animates its scenes.


On top of this, the ROBF games also manage to be tricksy little RPGs in their own right.  There are stats and level progression to min-max to your heart's content as well as all the usual JRPG features (good and bad).  If anything ROBF is too much like a conventional RPG.  Playing these games as someone who can't read Japanese is quite hard.  Automated machine translation is okay at giving the gist of what's going on, but for when you need to follow precise instructions in order to unlock the next area...

It's been a while since I've done any Let's Play stuff, but I'm thinking it might be fun to have a run through of ROBFEOY.  There are a couple of potential wrinkles though.  I'll be using machine translation and given how famously inaccurate this is, there's a high chance I'll end up getting irretrievably lost/stuck at some point.  I'm okay with this as it will probably be funny.

There's also a possibility that any Let's Play series might get DMCA'ed to oblivion.  The creator is very protective of their IP and not that enthusiastic about non-Japanese players playing their game, to the point that they added various Japanese language quizzes as a form of impromptu copyright protection.  From what I've read, the creator is very sensitive about their work being pirated.  Personally, I think making your game harder to buy for the customers that want to buy it exacerbates the problem, but I can also see merit in the argument that the Western market is very small in comparison to the domestic Japanese market and that shutting out a few niche Western purchases is worth it if it reduces the chance of a pirated copy popping up somewhere online and eating into your much larger domestic consumer base.

On that note, if you want to know where to buy a copy of this game from (as it's not available on the English side of DLSite.com, my usual source of sexy Japanese monster girl stuff), I was able to buy it from DMM.co.jp here.

Anyway, other factors permitting, a Text Play of ROBFEOY along the same lines as what I did for Monmusu Quest: Paradox might be fun.  One thing I was thinking of doing was opening it up to a little crowd participation, maybe letting the comments have a say on where to go next/how to develop our doomed hero.  That way we can all get hopelessly lost and confused rather than just me.