Night of the (Predictable) Demons

Two reasons to see Night of the Demons: 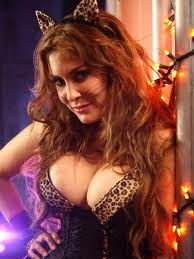 Ugh. Sorry. I don’t know what came over me there. The sixties maybe. Or a strong urge to put on a flat cap and take t’whippet for a walk.

Anyway. The attractive lady is Bobbi Sue Luther, who also happens to be the face of St. Pauli Girl beer. Not that I make a habit of stalking attractive scream queen’s Wikipedia pages or anything. Um…

Sadly, the film is rather disappointing. No fault of the gorgeous Ms Luther. It's all a bit too predictable—place a cast of attractive plastic people in a spooky house and kill them off in gory fashion over the course of ninety minutes or so. Nothing new there. Bobbie Sue Luther plays the one-who-drinks-too-much-and-must-die; Diora Baird plays her friend, the slutty-one-who-has-sex-and-must-die; and Monica Keena rounds out the trio as the goody-two-shoes-who-obviously-survives.

There’s an interesting scene that hints at what the movie could have been. Diora Baird’s character, fresh after being converted to demonhood, pushes a lipstick into her breast, which then travels down her body and exits in a puddle of blood presumably from her intimate nether regions. It’s kinky and perverse and it would have been a far more interesting film if the makers had taken that theme of demonic perversity and dialled it up to eleven. Instead the film falls back onto the safe old clichés of snarling, fright-show mask demons jumping out of the darkness and pulling out their victim’s entrails. It’s fun, but it’s been done before and much better in countless other horror films.

I’ve been disappointed with most of the spate of recent horror remakes. Compared to the inventiveness and craziness shown in some of the recent Japanese gore movies, the US films look staid and straitjacketed. Where’s the sense of fun that was around back in the days when Sam Raimi was running around with a camera strapped to a plank?
Posted by M.E. Hydra at 05:38