HWA sucks in debate for Vampire Novel of the Century

The Horror Writer's Association is marking the centenary of Bram Stoker's death by adding an award for Vampire Book of the Century to this year's Bram Stoker Awards. By century they mean 1912 to 2011, not the 20th century as I discovered after making a tit of myself on the comment boards of a major British newspaper.

The Soft Whisper of the Dead by Charles L. Grant
Salem's Lot by Stephen King
I Am Legend by Richard Matheson
Anno Dracula by Kim Newman
Interview with the Vampire by Anne Rice
Hotel Transylvania by Chelsea Quinn Yarbro

It's a selection that leaves me conflicted between the book I'd like to see win (Anno Dracula) and the book I think should win (Interview with the Vampire).

Kim Newman is probably better known today as Empire's goto man for reviewing B-movies of questionable quality. He's also a bloody good horror writer. The first thing I used to do on purchasing the latest Year's Best Horror or other similar anthology was flick straight to the Kim Newman story.

Anno Dracula takes Dracula as a starting point and plays What If! the heroes lost and Dracula won. What we get is an alternate history with a blood-bloated Count on the throne of the British Empire, Queen Victoria on a leash, and vampirism spread throughout England. It's a lot of fun and, as with all of Kim Newman's work, part of the entertainment is spotting all the references to the historical figures and fictional characters of the time.

Of the other books, I Am Legend might seem like an odd choice on a vampire novel shortlist. Isn't that a zombie apocalypse book? you might think, especially if you've only seen the film adaptations. While it might be hard to believe in these sparkly, post-Twilight days, vampires were once used as a metaphor for contagion and plague, a role which has largely been stolen by zombies in more recent times. This is also the reason, despite being an excellent book, it shouldn't win. A true thoroughbred, but someone changed the track midrace and now it’s charging down the wrong path.

As good as the other books are, I don’t think any of them come close to having the same cultural impact as Interview with the Vampire. You only have to look at the shelves clogged up with vampire fiction at your local bookstore (if it hasn’t already closed down) to see the enormous influence of Anne Rice’s work. Without Interview would we have had the vampire-craze of Twilight, or most of Urban Fantasy in general? As much as horror purists might hate how vampires have changed from badass and evil to emo and whiny, it’s really hard to argue against Interview with the Vampire being the defining vampire novel of the last century in the way Dracula was the defining vampire novel of the one before.

I’m still going to put up a link to Newman’s Anno Dracula, as he’s basically awesome and definitely worth checking out if you haven’t read his work before. 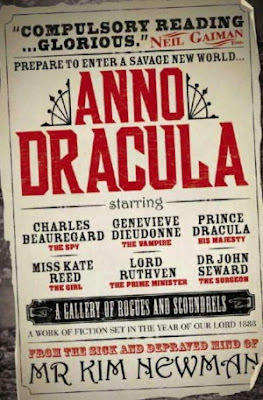 I would have liked to have seen Brian Lumley’s Necroscope on the list, but as I haven’t read either the Grant or Yarbro books I can’t legitimately argue it should be on there at their expense.

Anyway, vampires are so last century. I think it’s time for the sexy, soul-sucking succubi to claim the darkness… ;)
Posted by M.E. Hydra at 16:19