My rant about the relevance of horror fiction nowadays is a perfect excuse to kick off some book reviews I’ve been meaning to post for a while without finding the time.  Yes, I’m another (sort of) horror writer writing about other horror books, but I’m also regarded as the great unwashed self-published slime by anyone who’s anyone.

Ooh, someone’s chip on their shoulder is showing.

No community connections here.  Unless it’s one of my eXcessica/Literotica stable-mates, in which case I’ll put a ruddy big disclaimer at the top of the post.

First up some Bizarro from the mutton-chopped master of madness, Carlton Mellick III

Warrior Wolf Women of the Wasteland. 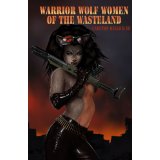 Okay, so this is where the hype comes from.  And it’s deserved.  An awesome ride that’s hugely entertaining as well as making mincemeat out of more serious books tackling similar themes.  I love the verve and confidence.  It’s like Mellick is saying, ‘Look, I can create a future world based off of McDonald’s Happy Meals, fill it with furry chicks, giant wolves and multi-armed mutants, and it will still have more to say than any number of serious, dull and downright miserable SF dystopias.’

In a post-apocalyptic future, survivors are living in a walled city surrounded by wasteland.  Authority is what you’d expect if a multinational fast food conglomerate bought the government, judiciary and police force.  There are troubles in happy-happy-we-will-fuck-you-up-if-you’re-not-smiling utopia.  Men are growing extra limbs and the women turn into wolves if they get too sexually aroused.  Just as with everything else defective in modern consumerism, when this happens the unfortunates are thrown out to fend for themselves in a wasteland where female werewolf biker gangs battle mutant armies led by a man with a giant hamburger for a head.

There’s gratuitous weird sex, furry apocalyptic bikers and all kinds of imaginative craziness, but throughout it all Mellick keeps a solid grasp on the fundamentals of plot and character.  Despite the odd building blocks, the story holds the reader’s attention without floating off in a cloud of nonsensical froth.  The only criticism I have is how eager the survivors were willing to throw in the furry bikers.  Mellick does give reasons for the survivor’s actions, but they didn’t seem that strong given how eager the wolf women were to kill them or worse.  It’s a minor blemish in an otherwise thoroughly entertaining read.

I’d love to see this made into a film, but as it would require every litigious corporate fast food behemoth to go out of business first, I suspect it might be a long time coming.  We can all do our part—don’t eat burgers, buy a vindaloo instead! 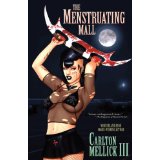 This is a shorter read.  Ten characters are trapped in a mall that appears to be menstruating.  Weird shit happens, some of them die, and then the mall and survivors start to change into something else.  Not as strong as Warrior Wolf Women as there isn’t much underpinning the story other than skewering some obvious stereotypes and being weird-as-fuck for the sake of being weird-as-fuck.  Fast, fun and inventive, but by the end of it I found myself sharing the same sentiments as one of the cast when they had their “Screw this, I’m outta here!” moment.
Posted by M.E. Hydra at 01:08