This is a game I hope to see translated.  Part of this is because it doesn’t play too nice with auto-translation software and it would be nice to know what’s going on! 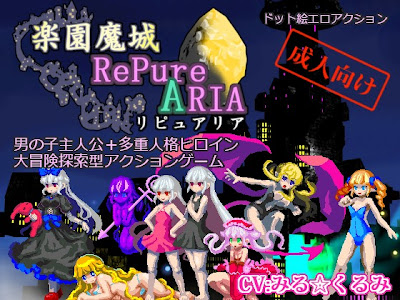 The ‘sort of’ male protagonist is because there is a little bit of gender bending.  The lad strikes a deal with a demon princess to share his body while they explore a massive castle.  In female form the player is highly mobile and can fight enemies with magic.  She also has multiple forms which are hidden as crystals throughout the castle.  These different forms have different abilities which, like the old Castlevania games, serve to unlock previously inaccessible parts of the castle.  For example, the chaos form can slide under small gaps and the innocent form can freeze waterfalls, making them climbable.

As a game it’s another example of someone pouring in a lot of love and effort to make something more than just a selection of naughty pixels.  Even without the H content this would be a pretty good action game.  The protagonist handles well, the differing demon princess forms mechanic is interesting and there is a huge castle to explore with a good range of sexy monster girl enemies to run into.  Oh, and a few creative boss fights that require a little more thought than just hanging back and blasting away.

Overall there are a lot of nice ideas and there’s plenty of value as the castle is so huge.  On the downside, the huge area means it’s easy to get lost and not have a clue where to go next.  Some might find it a little too frustrating, especially with the language barrier and not understanding what items/familiars/etc actually do.  Thankfully, quite a few people have been battling through the game and this thread is enormously helpful for players that get stuck.

If you like sexy monster girl eroges, but are a bit bored of the RPG-maker-type clones, you might want to give this a look.  And also, with a bit of luck, someone like RogueTranslator or Dargoth might put out an English translation while they’re waiting for Monster Girl Quest 3 to come along.