This is posted a little later than planned.  In my defence I was out drinking for New Year’s Eve and didn’t get back until 6 in the morning.

Okay, let’s go into Twine and have a look around.  I downloaded it from the website so I can use it offline if need be.  It opens up in whatever you use as a web browser (Firefox for me).

First step is to create the new story.  The original title was “Ways to Break a Good Man, #1” to tie in thematically with a previous short story ("Ways to Break a Good Man, no.2".  This is a bit abstract and as the focus of the CYOA version is going to be more on Ceptophthorié doing her naughty things rather than the philosophical questions of the original, I’ll change it to the more innocent sounding A Night With Ceptophthorié. 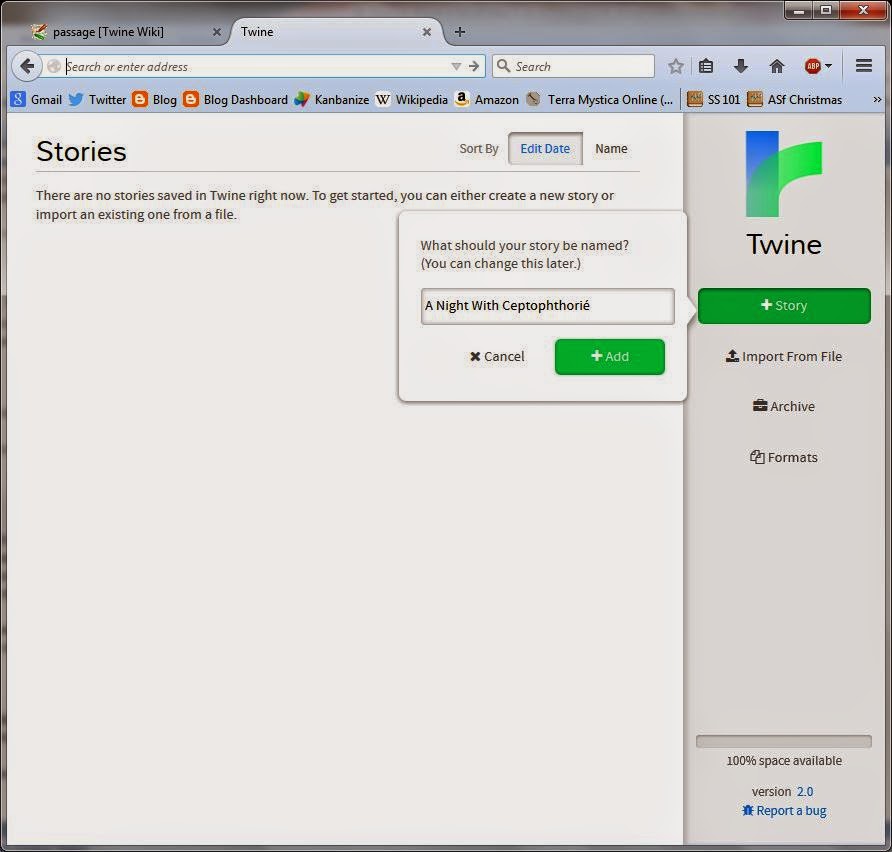 After entering the title and creating the story we’re taken to the story editor. 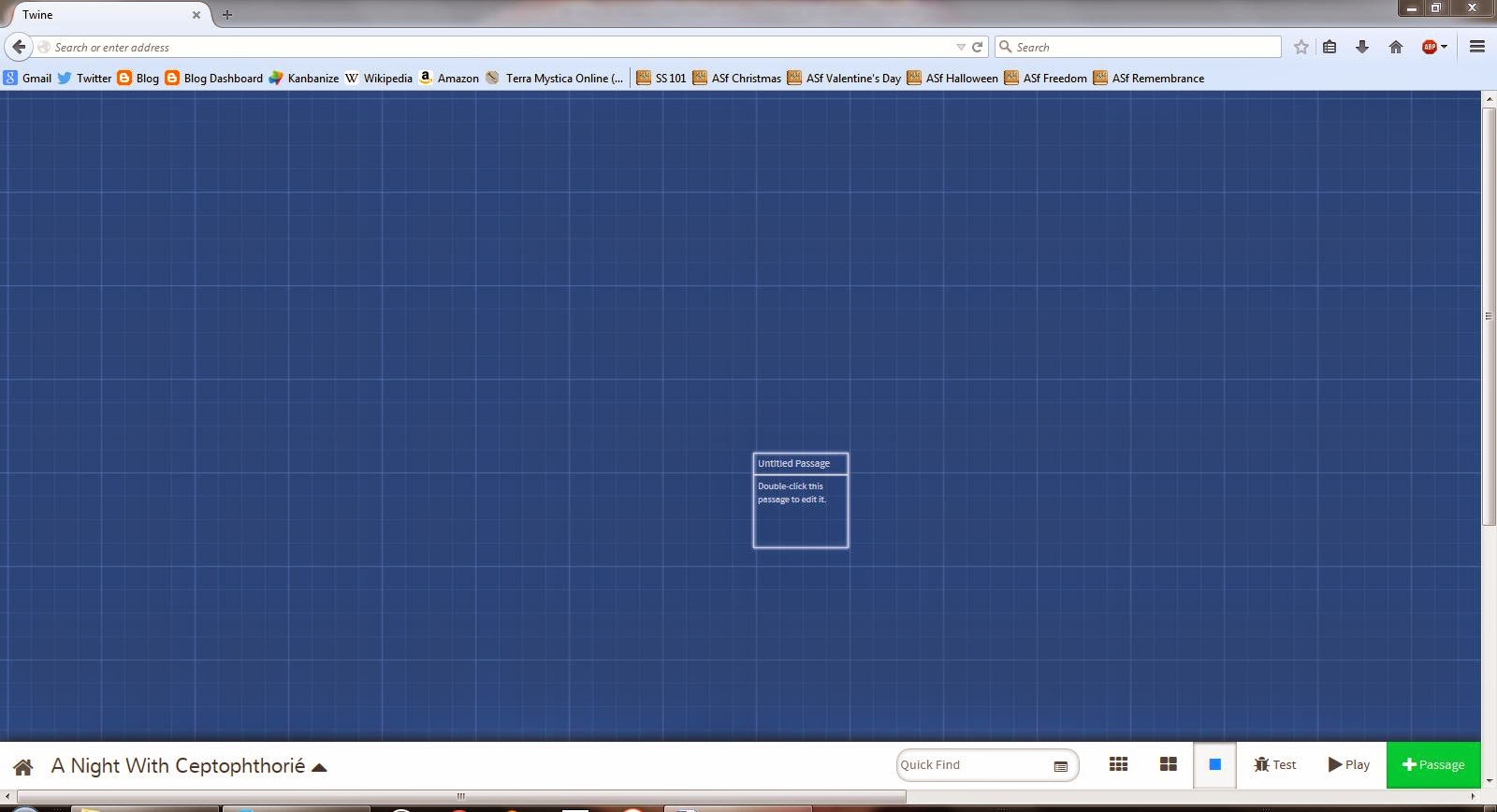 Stories in Twine are made up of passages that are linked together in ways to make it interactive to the reader.  As of the moment we only have the one passage.  This is going to be the starting point and must be named “Start” according to Twine’s wiki (I’m unsure on this point – it might only apply to an earlier version of Twine).

Now for the text.  This is the introduction from the short story:

Norris King woke up.  His tongue felt dry, swollen, about two sizes too big for his mouth.  His eyelids scraped over his eyeball like sandpaper as he opened his eyes.  The lines of the ceiling swayed and blurred above him, as if he was looking at a projection onto a swirling pool of water rather than solid architecture.  By concentrating he was able to bring the lines and angles back into sharp focus, but only while maintaining concentration.  The moment he stopped focusing, his vision started to blur and shift.

His head felt awful.  He felt like he’d gone on the mother of all benders the night before.  He knew that couldn’t be the case.  He’d never picked up a taste for alcohol and a drunken prank gone wrong during his university days had convinced him drink was not going to feature in his future in any shape or form.

He heard car horns and the sound of traffic.  They sounded a long way down.  Was he in a hotel room?

It looked like a hotel room.  His head felt heavy—slow and sluggish—like someone had poured concrete in his ears.  He moved it enough for the walls to swim murkily into focus.  The wallpaper was a bland print with lines of fleur-de-lis as a pattern.  An equally bland painting of a bowl of fruit was hung on one of the walls.

There were two other people in the room.  An attractive girl with long, wavy red hair sat on a chair in the center of the room.  Behind her stood a fat man in an expensive suit with a bloated pale moon of a face.


Regular readers of mine will recognize the fat man with ‘a bloated pale moon of a face’ as Koontz, a recurring character of mine.  For the sake of simplicity I’m going to remove both him and the lengthy discussion that sets up the later challenge.  I might return them later, but to start with I think it’s best to cut the story right down to the bare essentials and then build on that later.

Even if she was an attractive floozy, and King had to concede she was very attractive indeed.  She must be one of Koontz’s higher quality escorts.  Wavy red hair cascaded down on either side of a doll-perfect face.  Her face had the perfect, unblemished contours of a fairytale princess . . . combined with eyes and full lips that glimmered with the prospect of less-than-innocent mischief.  He thought it a shame such a pretty face had been squeezed into a ridiculous Vegas-style showgirl costume.  The neckline of her shiny top plunged down to her navel and revealed enough flesh to shame a ten-dollar whore.  He presumed it must be some kind of fancy-dress devil costume as she was also wearing a pair of fake horns.


The introductory passage will combine both these sections and as I’m writing a CYOA the viewpoint will shift from Third Person to First Second Person (classic post-NYE booboo, thanks to anon for spotting).  I’ll also shift the tense from past to present as it’s supposed to represent things that are happening right now.  That gives us an introductory passage that looks like this:

You wake up.  Your tongue feels dry, swollen, about two sizes too big for your mouth.  Your eyelids scrape over your eyeball like sandpaper as you open your eyes.  The lines of the ceiling sway and blur above you, as if you were looking at a projection onto a swirling pool of water rather than solid architecture.

You hear car horns and the sound of traffic.  They sound a long way down.  Is this a hotel room?

It looks like a hotel room.  You move your head enough for the walls to swim murkily into focus.  The wallpaper is a bland print with lines of fleur-de-lis as a pattern.  An equally bland painting of a bowl of fruit hangs on one of the walls.

There is another person in the room with you.  A highly attractive young woman is sitting on a chair in the centre of the room.  Wavy red hair cascades on either side of a doll-perfect face.  Her face has the unblemished contours of a fairytale princess . . . combined with eyes and full, sensual lips that glimmer with the promise of less-than-innocent mischief.  She is wearing a revealing red outfit that shows off enough flesh to shame a common street hooker.  The neckline of her shiny top plunges down to her navel and shows off the lush valley of her cleavage to its full extent.  It must be some kind of fancy-dress devil costume as she’s also wearing a pair of fake horns.

She smiles at you.


I could type this directly into the passage box in Twine, but for ease of editing I wrote it in MS Word and then copy’n’pasted it into the dialog box for the passage.  Which looked like this: 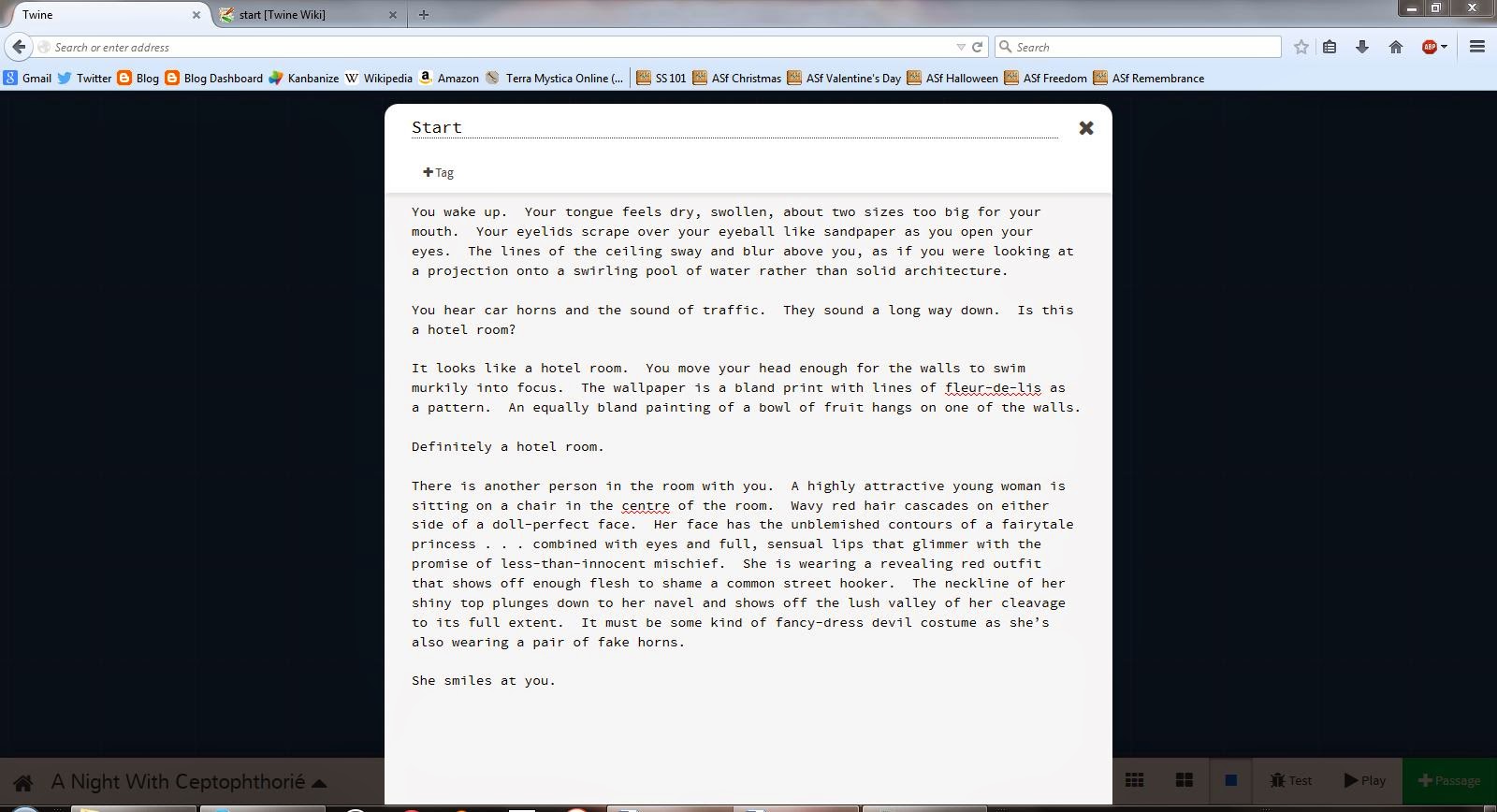 One tip for copy’n’pasting text.  Always go through notepad or similar basic text editor as an intermediate.  It might not apply for Twine, but for most web apps/pages pasting directly from MS Word will drag in and add a lot of junk to the resulting HTML.

Now I have an introductory section.  This can seen by hitting either Play or Test on the bottom right. 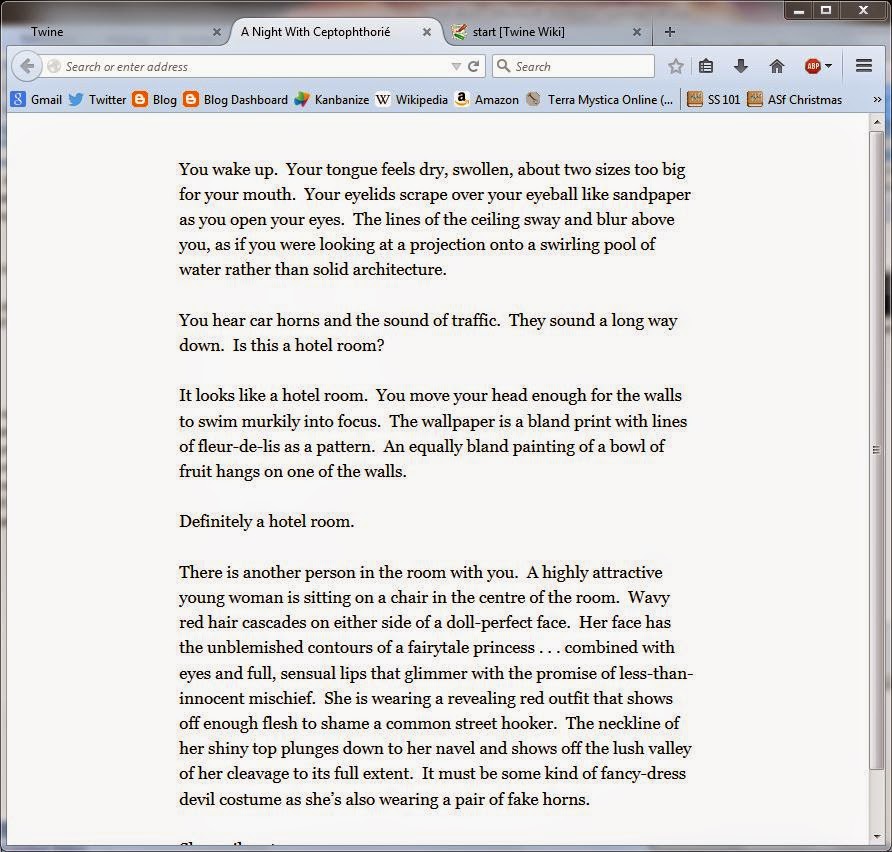 It’s not quite right.  In the original you’ll notice there was some italicised text.  A quick check of the Twine wiki reveals they have support for various bits of text formatting and to get italics I add // on each side of the section I want italicised.

A further thing I could do is reduce the font size or split the introduction into two to avoid the player needing to scroll to read the whole of it.  It also looks very crude.  I’m not going to worry about that for now.  I can pretty it up later.

I now have a nice introduction that sets the scene.  At the moment the CYOA doesn’t have much in the way of choice or story.  I’ll look to rectify that next time.
Posted by M.E. Hydra at 16:26