It's part 27 of the epic Monmusu Quest: Paradox playthrough (go back here for part 1) and we're off to a new city, San Ilia.

There are some new wandering monster girls in this area, including some predatory… watermelons? 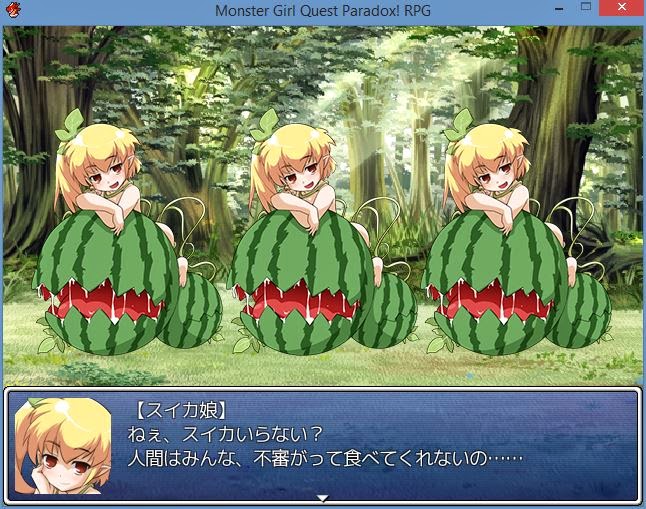 That's going to make for an interesting post-loss evaluation.

Ilias: "And how did you lose this time, you pathetic masochist?"

Luka: "I was eaten by a watermelon."

Over-levelled as I probably am, I still managed a legitimate loss to a trio of melon munchers.  Sleep is quite effective when it knocks the entire party out and no-one wakes up before they've all had their HP reduced to nought.  Despite their appearance, the Bad End is surprisingly non-vorey.  The watermelon part does half swallow Luka, but it's only to get his cock shoved up in soft, squidgy flesh for a rather odd sex scene. 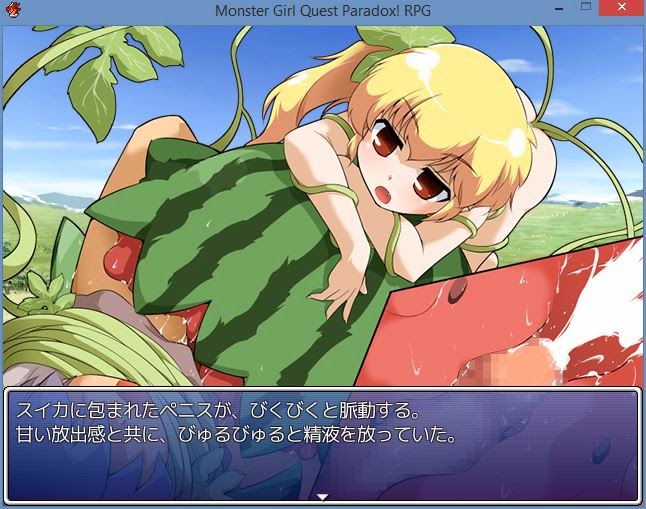 San Ilia, as with most of the city locations, is massive.  There's plenty of background and information on the surrounding area.  There's some kind of shrine at the Luddite village to the north-east of here.  The tunnel north of there is blocked because of the war.  I suspect the Paradox series will go more into that in the second chapter.  Also to the north is a haunted mansion (likely Chrome's mansion from the first series) and a forest region full of elves and fairies (likely the Forest of Spirits where Sylph can be found).  There are also mentions of two new areas – a holy mountain where everyone's a priest to the north and some slums to the west called Monte Carlo.

There are also warnings about new abnormal statuses and what needs to be bought to cure them.  Zombies can cause the zombify status and holy water is required to cure it.  Fairies can shrink party members and this needs a lucky mallet to fix.  Neither is likely to be relevant until we enter Chrome's mansion and the Forest of Spirits respectively.

In the inn there's a funny moment when we try to take something out of a pot in the same room as another party.  They all turn around and ask him what he's doing.  This is likely a continuation of TTR's in-joke about the kleptomaniac heroes of most RPGs.

The blacksmith can make Mithril weapons and armour, but as with Midas Village we have to go and find a chunk of Mithril for him to use first.

The battle-fucker can be found up in the northwest.  You can't miss her.  Hers is the house with all the crashed-out dudes outside the door.  And she's a… 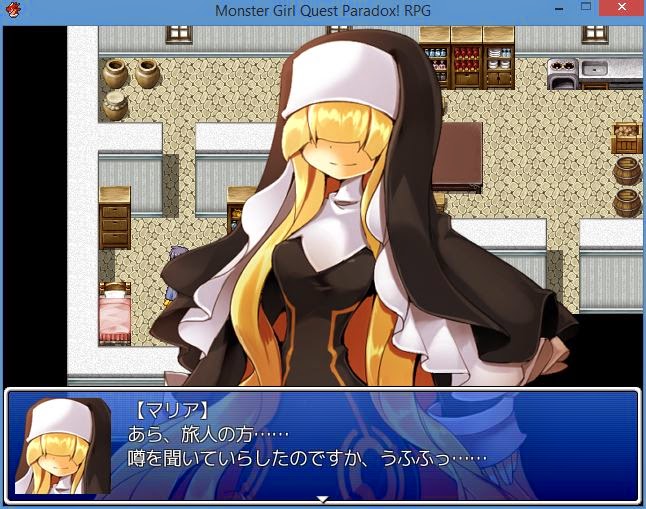 A very naughty nun at that.  We lose the first time.  Then I remember to remove the Desperate Training ability from Luka and… 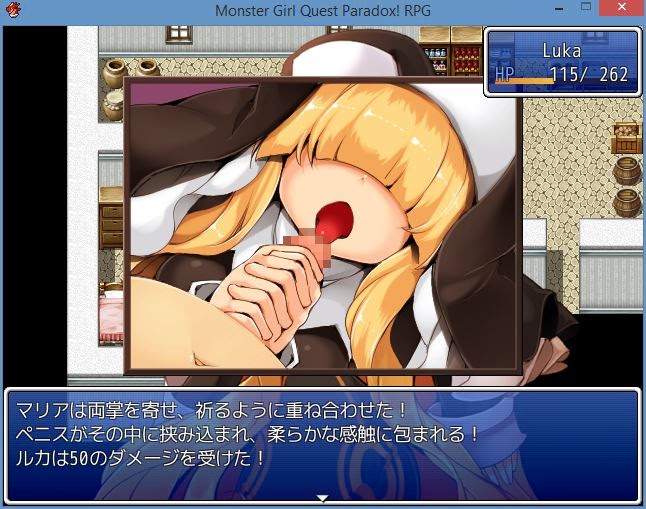 …we lose again.  Hmm, I might have to re-evaluate that 'probably over-levelled' bit.

There's a big cathedral-type building to the north.  The two kitsune are staring at it in wonderment.  News of Luka's baptism (where Ilias herself came down) has spread and we're ushered straight through to the big guy on entering the cathedral. 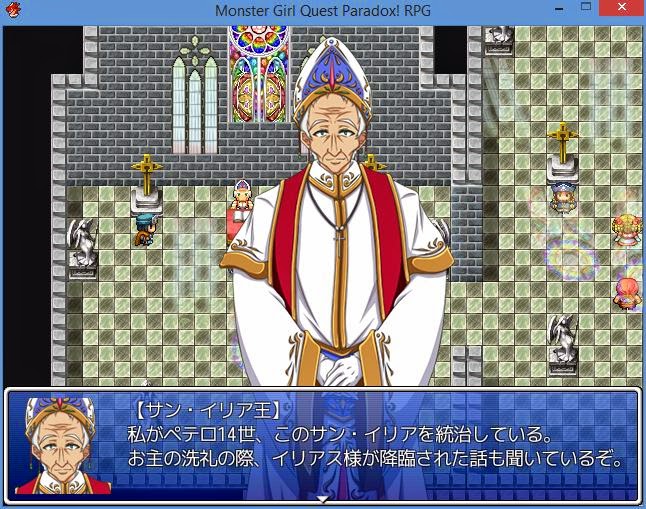 The pope doesn't have any information on the White Rabbit, but he does have some possible news on Marcellus, Luka's father.  There was a sighting around the third Tartarus pit near Sabasa.  He also left a book in the library, but it's down in the lower level and that's overrun by demons.

Oh, we're in that part of the world.  Prepare yeself book lovers, you're about to be introduced to a more literal (and forceful!) interpretation of the term.

There are a lot of worshippers in the room next to the pope.  It's another of those areas where I suspect having Ilias in the party would be very funny.  As it is we have to make do with Promestein being very snarky to the 'truer' believers, and Promestein is an extremely snarky angel.

The way to the library is down a big set of stairs to the right of the main entrance.  A guard warns about the demons on the lower levels.  Candola, the candle wax girl, is quite excited by the prospect of setting a lot of possessed books on fire.

The upper level is full of more NPCs giving out helpful advice I don't understand.  The level below that is a conventional dungeon where Page 17 and Page 257 return from the original series to form the encounters for this section. 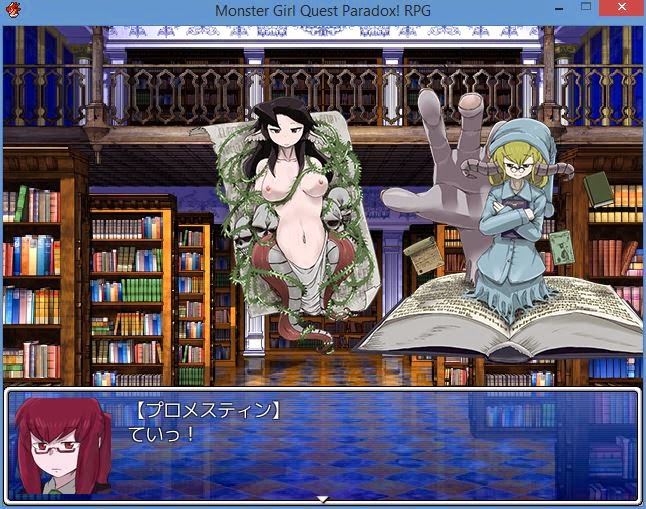 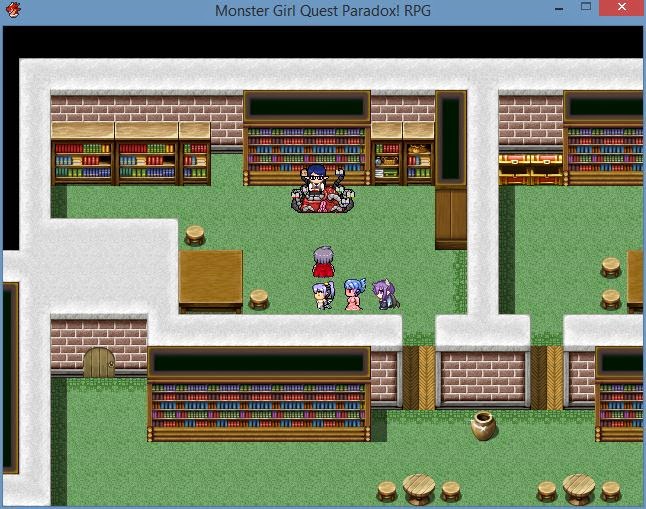 As with Meda it looks like the tentacle rule has come into play.  Congratulations Setouchi, your creations are so alien the game no longer has to pixelate their naughty bits. 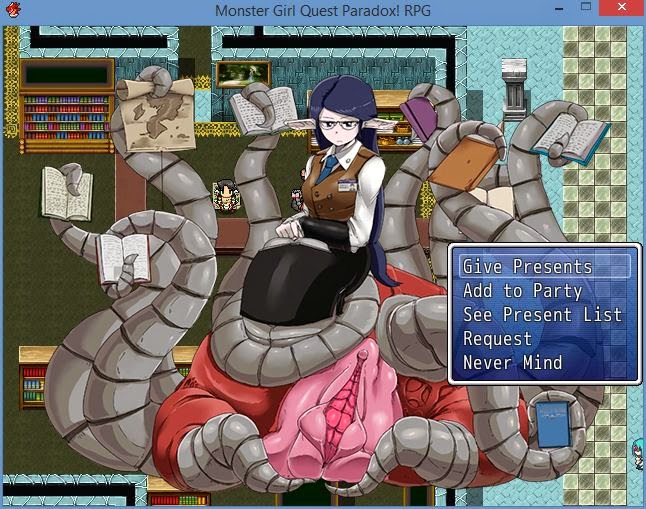 Again I muff up the translation.  In the previous series the demons were left here by Alice to stop heroes from finding out about the four elemental spirits and becoming strong enough to be a nuisance to monster girls.  Alice is surprised at Page 65537's behaviour.  I can't tell if it's because her mother (or the imposter of her mother) left the demons here, or Alice did and her mother/imposter overrode her orders to have Page 65537 guard this particular book.

This is one of those moments in Paradox where it's clear that gains in complexity in some areas (the recruitment and party systems) have resulted in losses in others (the struggling against a dominant monster girl aspect of the original puzzle battles).  The original fight had multiple phases and multiple ways for Luka to be dominated.  Paradox is a much more complex and better 'game' game, but the fights lack the sexy edge the original and other battle-fuck games like ROBF have.

After beating Page 65537 she hands over the book she was guarding.  It's from Marcellus and addressed directly to Luka.  It tells him to seek out contracts with the elemental spirits.  Again this is a repeat of the MGQ storyline, but tweaked from a different angle.

Alice tries to recruit Page 65537 back into the fold.  As condition for joining the fold Page 65537 wants a slushy romance book, The Lover of Mrs Shirley.  One problem, the book is so popular it's sold out everywhere.  Fortunately – and rather conveniently – the prize for beating Naughty Nun Maria at a battle-fuck is that exact tome.

Back in the castle Page 65537 claims to be a vegetarian when it comes to gifts.  That means it's probably safe to check out her request moves.

At 10 Affection.  "This meat machine is an evil design for squeezing out men's lives.  One more squeeze will kill you." 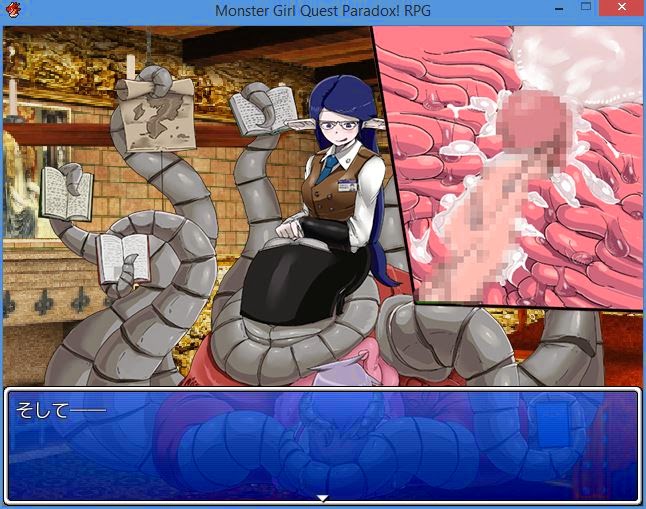 At 50 Affection.  "You're fortunate to experience this in safe surroundings.  This meat machine is an evil design for squeezing out men's lives.  One more squeeze would kill you.  Mmm.  I've changed my mind."

At 100 Affection.  "This meat machine is an evil design for squeezing out men's lives.  One more squeeze will kill you."

Nah, this time she lets us out.

Well that's us stupid for trusting her in the first place then.

Anyway.  That's all for today.  Tomorrow we're off to find some Mithril at the top of Saint Mount Amos.
Posted by M.E. Hydra at 14:42