Luddite Village and Ancient Shrine (I like the pope, the pope kicks ass)

We're deep in the Monmusu Quest: Paradox playthrough.  This is part 29 (of likely many).  The first part was last month sometime.

Last up we found the mithril ore needed by both the San Ilia blacksmith and the Captain of the Guard as proof of our ability.  First up its shopping time as the mithril items are better than everything I've currently got aside from a few items plucked from blue and green chests.  It's still a pain to compare all the gear.  I hate this part of RPGs and the RPGmaker games don't have a particularly good interface for sorting all the gear out.  (Yes, I can just hit the Equip Best button, but that doesn't always equip the right weapon or prioritise the right stats).

Now that we're all blinged up we can go on this top secret mission for the pope.  It's some kind of guard duty.  He needs to perform a ceremony at the ancient shrine near the Luddite village and needs us around to keep any wandering demons from interfering.

Sounds straightforward enough.  Not sure what it has to do with the overall quest of saving the world, but we might as well go along with it for now.

Ooh, time for another mention of the random encounters.  Alongside the Pac-man watermelon girls there's another new plant-type monster girl in this section – pitcher plant girls. 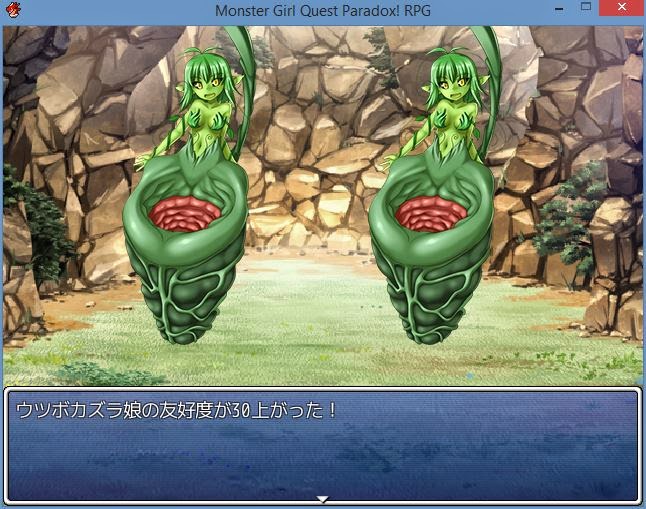 Now these will definitely eat you if they get a chance.  And also spray digesting juices from their nipples, apparently.  I feel like I've wandered into a Yoshihiro Nishimura movie. 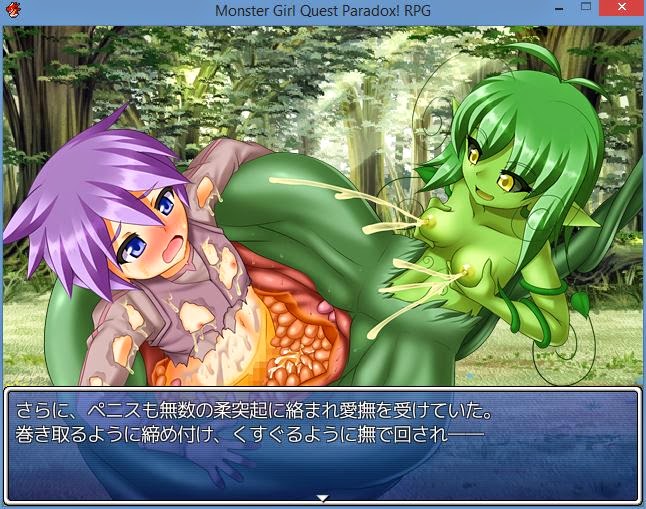 If you like them, I wrote about pitcher plant girls in a story once.  People got laid.  Then eaten.  I didn't have them spray acid from their titties.  I feel MQ:Paradox has one-upped me there.

Luddite Village is a dump.  Even Hips the orc is creeped out by it.  She's hiding in the trees to the north.  I'm guessing TTR is having a swipe at those that trust religion over progress.  All the women are terrified and either won't speak or make it very clear they're desperate to escape.  There's also mention of the war that closed off the tunnel to the north and affected the village's prosperity.

The way to the ancient shrine is through the woods to the west.  I think you have to talk to one of the clerics first (there are two of them in the village) and then one of them meets us on the path to the shrine.  The path snakes west, then north, and finally ends in a cave with a guard standing outside. 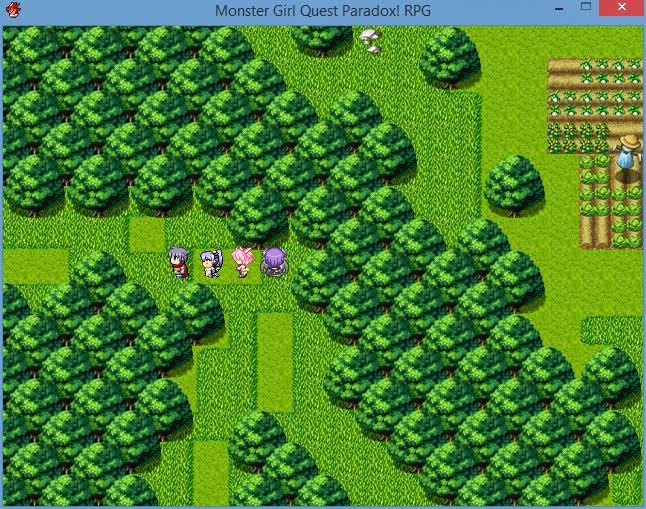 The first part of the cave is needlessly large and absent of just about anything.  We head west and eventually meet up with the pope outside another cave.  He joins the party as a non-combatant and teases Sonia about her relationship with Lazarus.  Someone tried to blow the pope up a while back and the rumours are that Lazarus was involved. 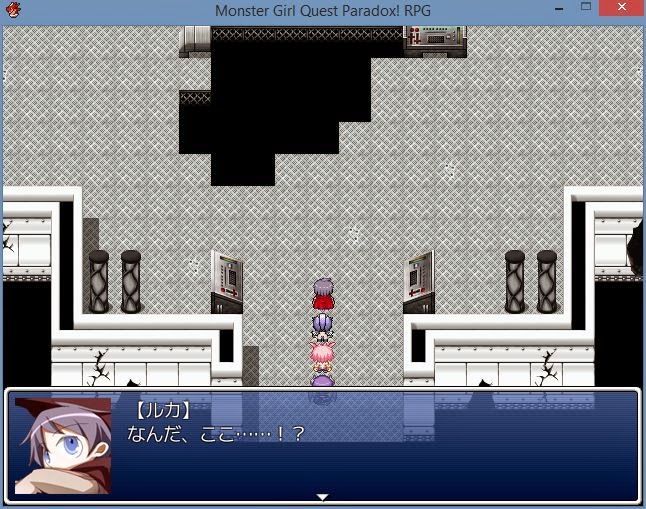 …Whoa.  This is not a cave.  Or an ancient shrine.  What the f is a high-tech lab doing here?  Is this more Tartarus?

New location means new monster girls.  First up we get one of Xelvy's bugs.  Which means I'm a little scared to lose to her. 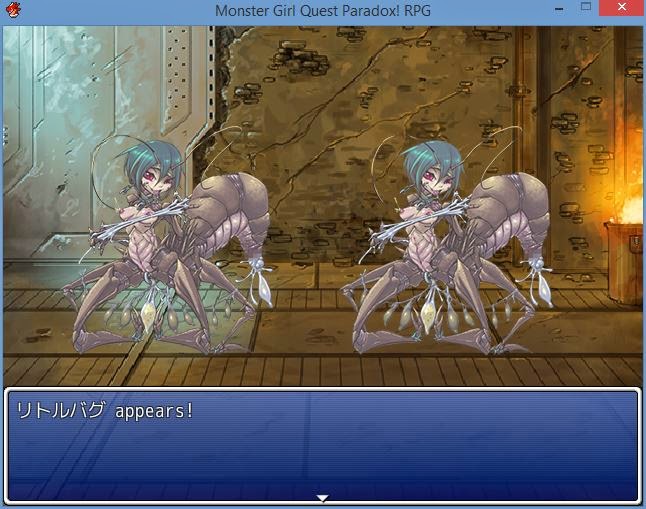 Little bug is actually quite lickle.  She also has good piston action apparently.  Yeah, I was probably right to be scared. 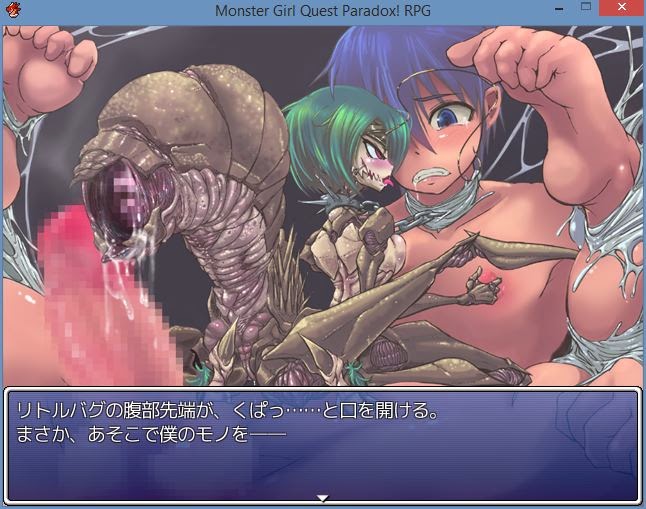 The second monster girl is a repeat, of sorts. 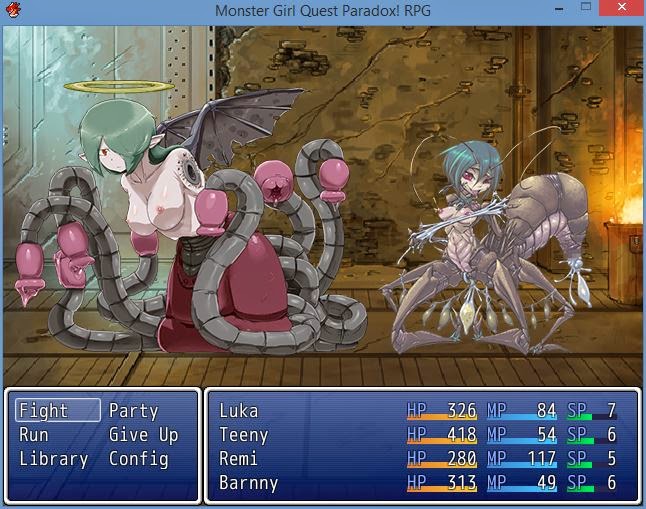 Chapter three of MGQ had a bunch of chimera monster girls that couldn't be fought and seemed to exist purely to jam a few extra sex scenes into the game.  I was critical of it at the time.  Now we finally get to fight them, although the party fights aren't really as sexy as the one-on-one puzzle battles of MGQ.

XX-7's Bad End is very odd.  Three knights appear seemingly from nowhere just so she can suck them up into withered husks.  It seems an awfully contrived way to reuse the art from MGQ.  Then her attentions turn back to Luka and we do get new artwork. 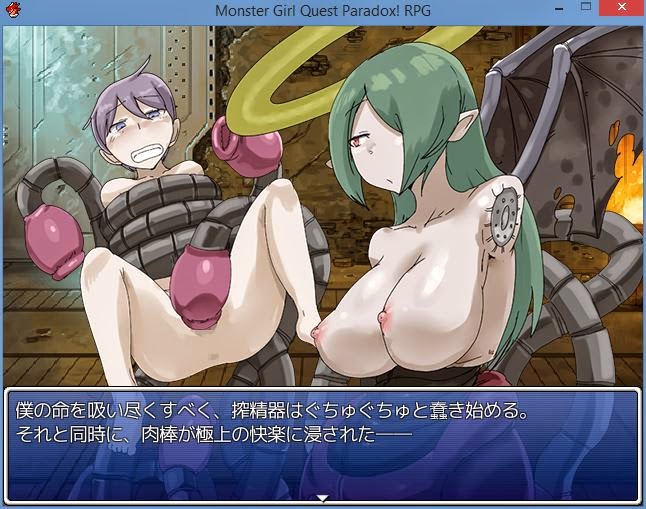 The game spares us the spectacle of Luka withering up into a dried up husk as little miss power-vac sucks out all his juices.

I thought these were the only two monster girls for this area, then I bumped into another one on one of the higher levels – Cancer Roid.  She's some kind of crab chimera-robot.  And very vore-y. 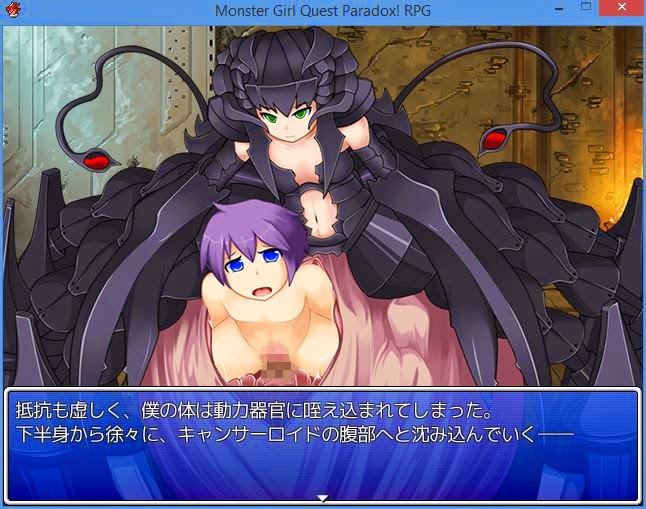 Probably shouldn't have let her get you in that digestion sac, Luka.

I'm not sure I trust this pope.  He seems completely unfazed by what is clearly not an ancient shrine.  Halfway through explorations he talks about the bomb attempt on his life.  It should have killed him, but the technology here kept him alive.  The only drawback is he has to return here every year for maintenance.

At the top we find a capsule with a girl inside.  I remember her from the front cover of the game.  She's a new character like Nuruko and Sonia. 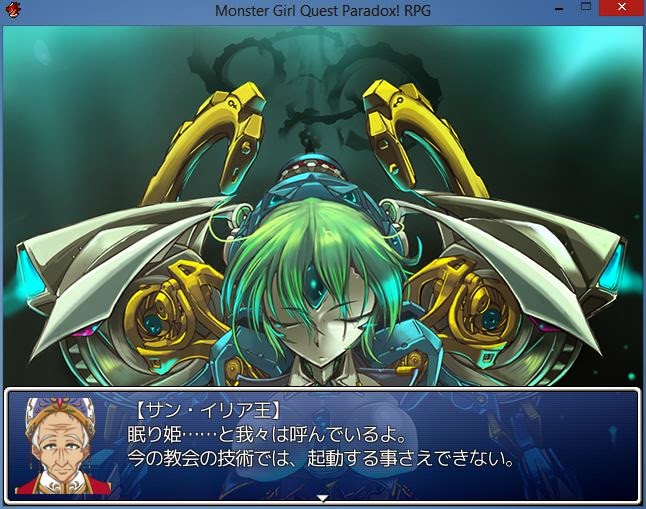 The pope goes to heal himself and Luka balls things up by waking up the sleeping princess.  Whoops.  She goes hostile and as she does Alice is freaked out when she notices both light and dark energy. 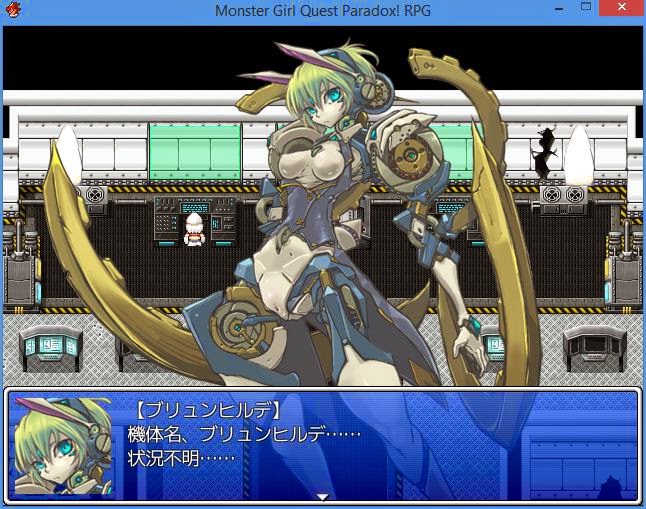 Woah.  This world's pope is a little more badass than the one I remembered from MGQ.  Enter Robo-Pope! 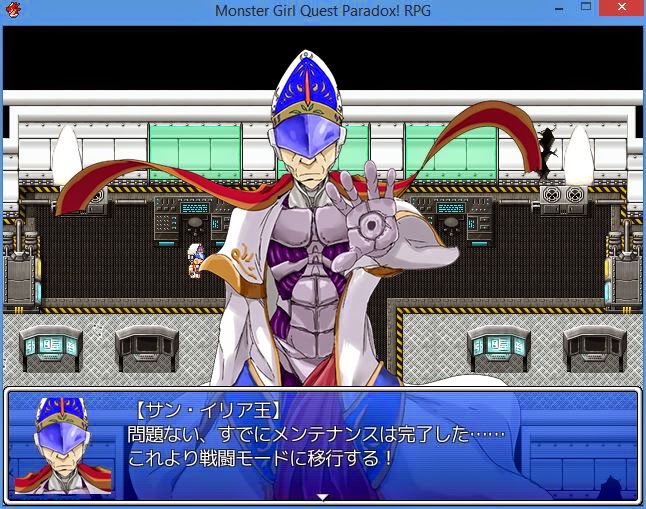 Sadly, he's not badass enough as machine girl kicks our asses and then goes succubus machine on Luka.  She even manages the impossible and empties the bottomless testicles of the ambulatory bag of concentrated semen.  There's even X-ray art showing it happen.  Thanks for that, Xelvy.

Note to self.  Make sure you remove Playfulness and all the other nega-abilities/equipment before entering a tough boss fight.

So obviously I don't.  I forget there's pretty much no opportunity to get control of the party between entering the room and the start of the battle.  Worse, if Robo-Pope died in the previous attempt, he starts off incapacitated for subsequent attempts.

On the 3rd attempt I remember to save outside.  It's a blood long walk to get here!  Hild, the machine girl, is bloody tough and hits hard.  On the third attempt I get lucky and Barnny blinds her with one of her arrows.  Her reduced accuracy gives me enough of a breather to whale on her with various lightning attacks until she falls over.

Afterwards Hild reveals she was created – although she doesn't know by who – to save the world in exactly this type of scenario.  Alice points out that we're trying to do the same thing.  And with that little misunderstanding out of the way, she decides to join the party.

She's not the only new recruit.  Back in San Ilia, Robo-Pope decides to join as well.  When Luka and the others point out he'll be missed he shows them a mechanical facsimile created for just this purpose (I suspect Luka just wanted his harem to himself).

That's another quest out of the way.  Tomorrow it's time to pay a visit to Chrome's spooky mansion.