We're up to 30, that's three-o, in the Monmusu Quest: Paradox playthrough.  For the start of this madness, see here.

Today we're off to Chrome's haunted house of fun.  How do I know it's Chrome's mansion?  Well because we've already been here before (twice!) in the original Monster Girl Quest series.  This is one of the weaknesses of the Paradox game, in my opinion.  So much of the world is already familiar, although TTR has tried to change it up in places – switching Kraken for Meia, for example.

So how do you feel about zombies?  Putrescence, rotting flesh… sticking your dick up in cold, liquescent pussy.  It's not exactly an easy sell.  Then again, in a game with crab girls and sea cucumber girls, zombies at least have the advantage they were (presumably) once normal girls, with recognisable sex organs. 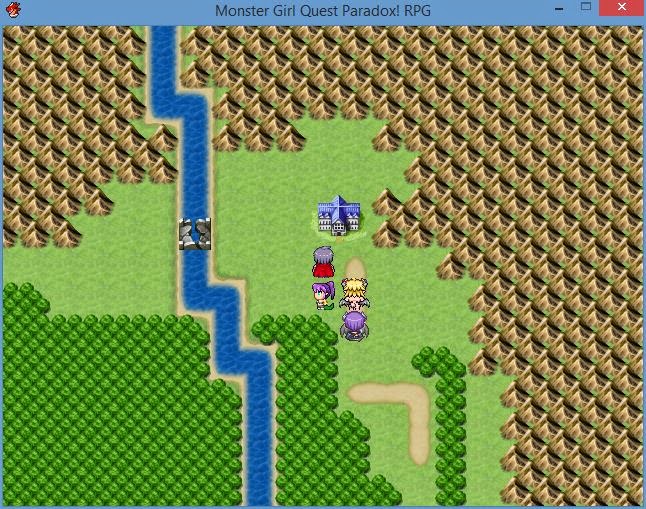 The main hall in the mansion has stairs going up to the left and right and two doors (hidden) in the left and right.  The left stairs are currently blocked by ghostly activity.  The right by cursed doll activity.  There is a ghost standing next to the left wall and a cursed doll standing next to the right wall.  Both leave when you go up to them to reveal a door hidden behind them.

The left door leads to a kitchen with some ghost girls working away at the sinks.  Interestingly, Paradox hasn't made the same distinction between ghost girls and actual ghosts this time around.  There's a big cake on the table.  Alice wants to eat it (no surprises there).  We eat the cake and then have to fend off the angry ghosts.  After the fight the left staircase is now clear.

The right door leads to a ruined room and a cursed doll standing next to a suspicious chest.  Obviously the chest is a mimic and she tries to eat us.  After winning that fight (mimics are beatable now) the right stairway will unlock.

Instead of Xelvy's scary insect girls, this time we have UN_DO's scary zombie girls.  Some of them are quite ludicrously endowed in the chest department.  Maybe that's something that bloats up after death. 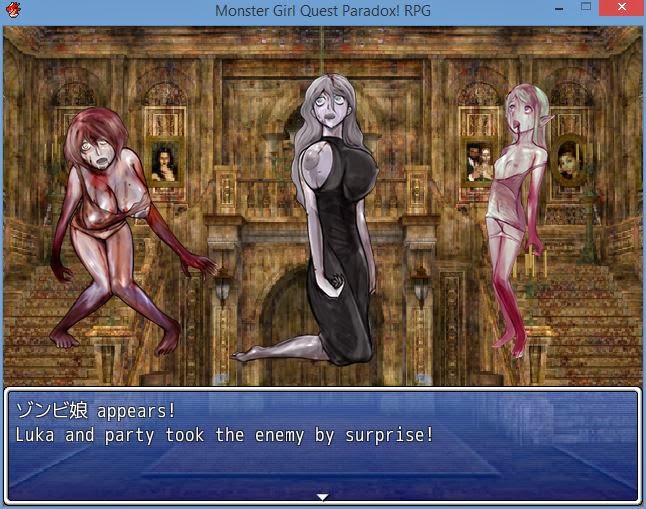 Euwww, imagination can you not just quit it once in a while.

I think the zombie horde (they also recruit as a horde) might be returners.  The new monster girl is a zombie fencer, I think. 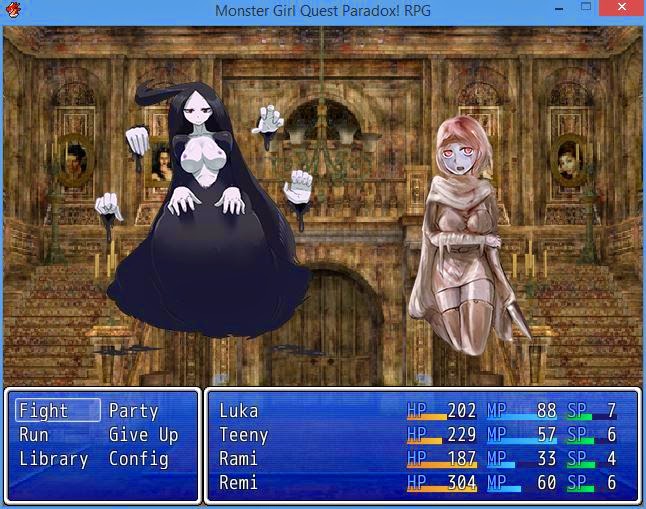 Her Bad End is not completely terrifying at all.  No sir. 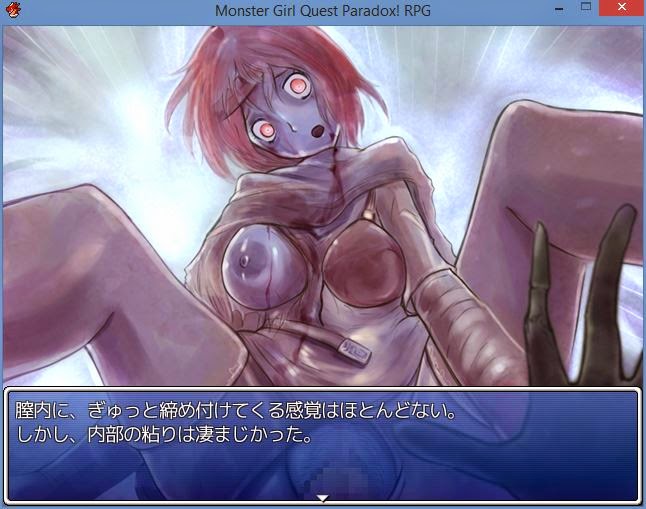 There's a bit of a difference in flavour to Chrome's mansion this time around.  All the undead girls seem to be mostly peacefully minding their own business.  There's a room full of dancing zombies that you don't have to fight unless you want to.  On the other side there's a friendly zombie that just wants a chat and even a friendly mimic (is that even possible!) that just wants things quietened down from what I can make out. 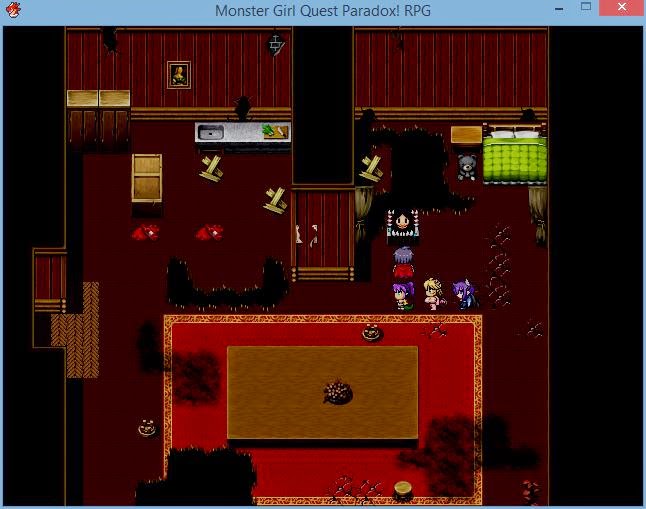 We do get into a ruckus in a banquet hall, but that's largely our fault for barging in unexpectedly.  It's also rather comedic with Alice getting terrified and trying to pretend she wasn't terrified afterwards.  This is all stuff we've seen already before, though, and it doesn't have the same effect as in the original story where the up-to-then seemingly invincible monster lord gets reduced to a shivering wreck by a few ghosts.  Back then it was a clever way to humanise her character and make her more likable (and was also extremely funny).

Up on the third floor we run into a familiar face – Chrome! 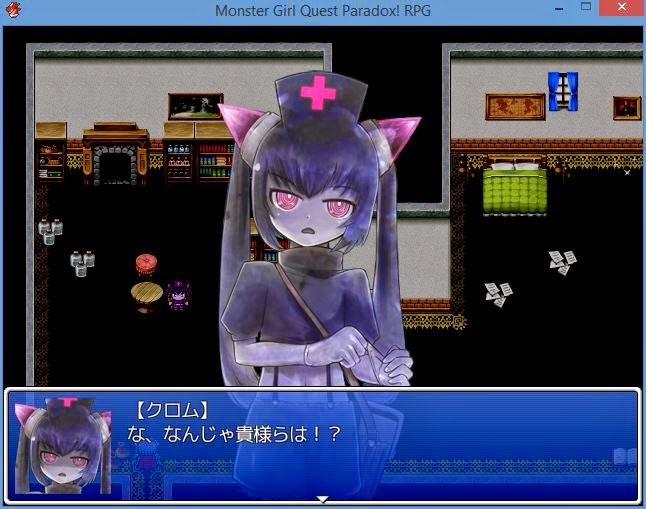 She legs it.  Not quite the epic confrontation I was expecting.

Okay, there are a number of triggers now.  First you have to follow Chrome through a hidden door in the wall.  It's here: 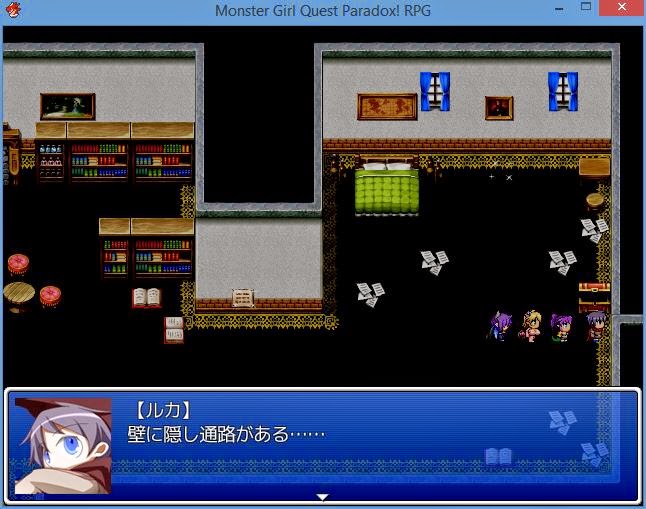 In the next room she tries to sic a pair of zombies on us, but they throw her back out through the door instead.  At this point you need to go back out to the corridor.  She should be standing next to a chest about halfway down the corridor.

You should corner her here.  At which point she tells you it's all part of her master plan to lure you onto her trap.  Her plan doesn't work as she has the trapdoor in the wrong place.  She falls through it instead.

I think this version of Chrome might not be as bright as her MGQ counterpart.

The next step is to go back down into the entrance hall.  The bookcase between the two stairways to the north should be gone.  This opens up a path into the cellars.  Some knights are in a cell, but Chrome hasn't been treating them too badly.  Around the corner and there's a big pentagram and Chrome standing with her ultimate zombie - Frederika

When we confront her she asks us what we're doing invading her research institute.  She might have a point.  Other than random wandering monsters most of the rooms have been full of undead minding their own business.

Oh wait, there are the dudes in the cell.  Plus there are probably laws against hacking up dead bodies and stitching them together in new and bustier forms.

One thing has changed.  This time it's a team boss fight with both Frederika and Chrome.  Like the other zombies, Frederika is vulnerable to fire. 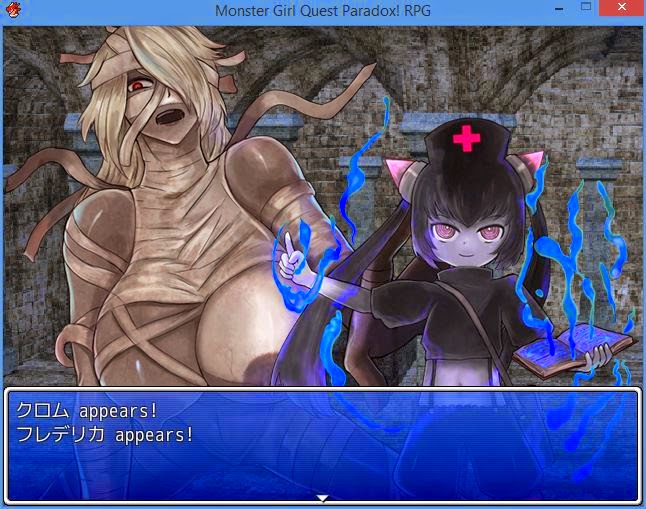 Afterwards Chrome gives her story about how she wanted to make the ultimate zombie to restore her house's standing in the eyes of the monster lord.  Alice points out she is the current monster lord and isn't entirely happy with Chrome's experiments with dead body parts.  Chrome thinks about shifting to necromantic studies instead and requires another prod in the right direction.  Researching Dolls and other artificial monster girls is a healthier way for a creepy young mad scientist goth girl to spend her time.

Frederika's tragic back story barely gets a mention this time around.  In the original series she owned the mansion before succumbing to illness.  The motivation for team Luka to stop Chrome the first time around was so that poor Frederika's desecrated body could be put to rest.  This reality's Frederika is fiercely devoted to Chrome.

The overall effect is to render Chrome's storyline a little bland.  In the original she was a villain, and then a villain with a tragic back story, and finally a bad guy redeeming herself in truly awesome fashion.  In Paradox she's a little weird girl with a super-zombie sidekick.  Playing through this section I got the impression Chrome's mansion was here because it was in the original series and they hadn't really thought of anything beyond that.

Enough griping anyway.  Here's a lewd of Frederika and Luka. 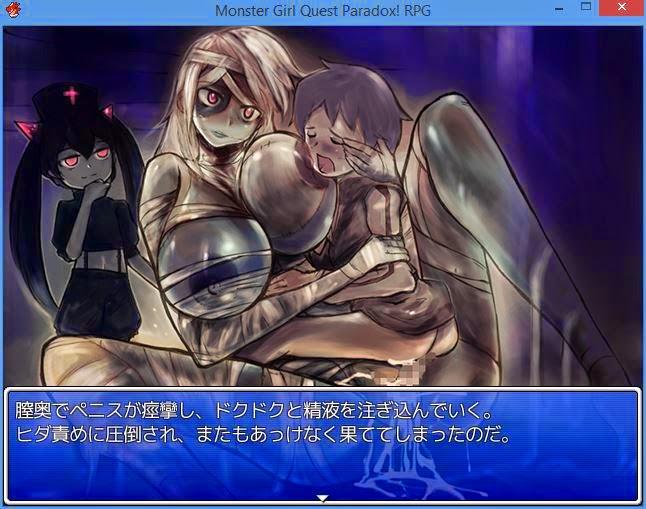 Frederika and Chrome aren't available for recruiting right away.  Now that Chrome is moving into Doll studies there's an item we need to find for her before she'll join the party.

What we do get is the last of the basic jobs unlocked.  Go back upstairs and talk to the friendly mimic and she'll give you the certificate for unlocking the Spiritualist job.  That removes the last ??? from the basic jobs list.  I suspect I'm going to run out of game before I figure out what even a quarter of these jobs actually do.

That's enough of this section of Sentora.  Tomorrow we'll cross the bridge to the west and check out Monte Carlo.