Another day, another post of the seemingly never-ending Monmusu Quest: Paradox playthrough.  This game is certainly value for money.  This is part 35.  Part 1 can be found here.

First up, there's a bit I missed off in San Ilia.  I would have included it in the Side-Quest round-up of a couple of days ago had I spotted it sooner.

The first time visiting San Ilia there is a staircase that's blocked by a guard.  At some point he stands out of the way (I'm not sure when – it might be after doing the guard duty quest for the pope). 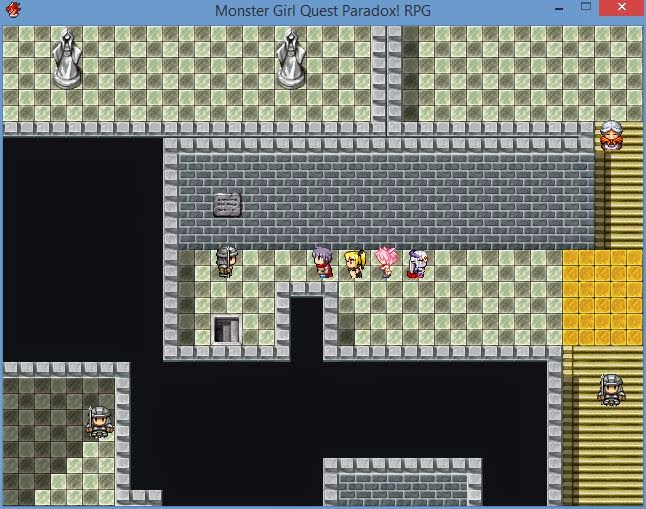 Those steps lead down to some kind of secret tech lab.  The scientist dude will give you some more machine type things.  I think they're for the Engineer job, but I don't know for sure as I haven't made much use of that job at all so far.  Talking to one of the dudes will also give you the item required to unlock the Gunner job. 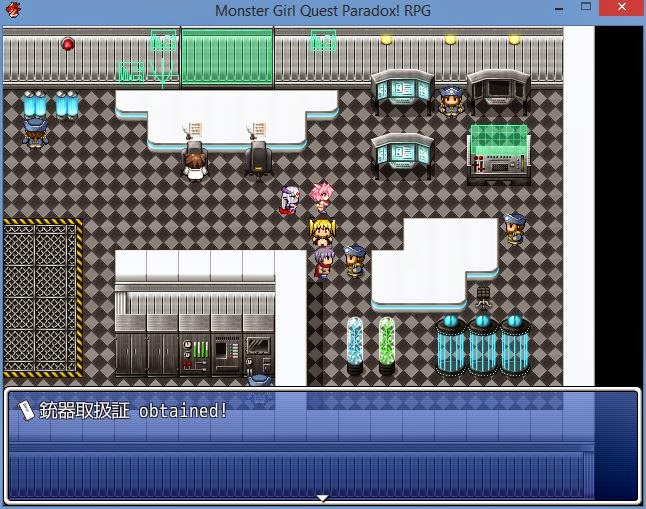 Back to the main storyline and it's time to head west.  We've already done the Monte Carlo stuff, so it's time to continue on along the road.  Further along is the abandoned fishing village.  All the inhabitants have vanished.  There's an investigative team from Sabasa trying to figure out where everyone went.  The only clue is a note saying they've gone to live with God.

Backtracking to the east along the south side of the mountain range reveals the entrance to some tunnels. 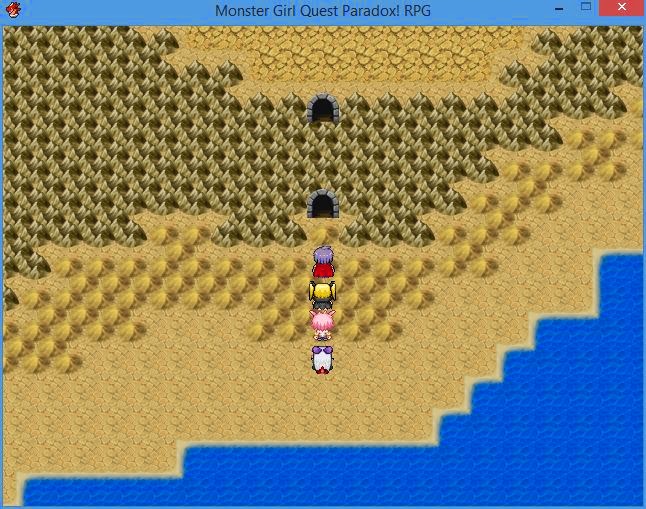 Here was where I was a little unsure of the sequencing.  After leaving one of the houses in the abandoned village Alice suggests pushing on towards Sabasa.  The walkthrough I have suggests going back to the cave.  What I did do originally was head out across the desert.  Then I noticed the monsters in the caves appear earlier in the Monster Library (this game's monsterpedia).  As a result I've rejigged the playthrough notes a little and put things back in the sequence I think they're supposed to be done.

Right, so we're looking for some missing villagers.  Also, the item needed to recruit Chrome is supposed to be around here as well.

There's another new encounter in the caves – centipede girl. 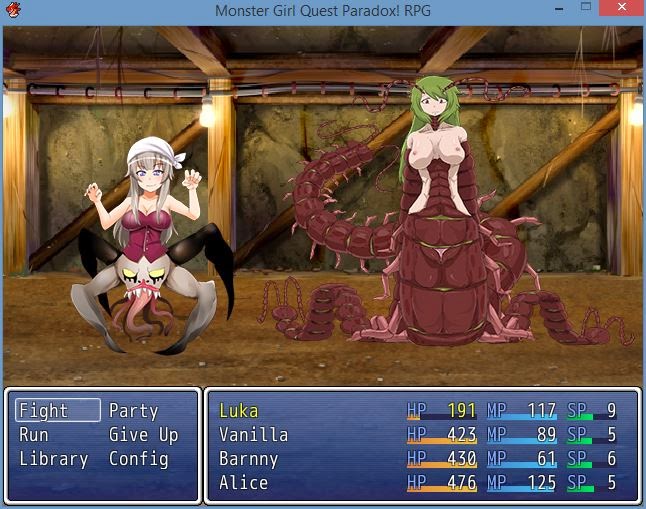 The cave loops around on itself.  Near the end there's a choice to carry on to the Puppet-master's Tower or investigate the lower levels of the caves.

We exit the caves and step out onto a plateau.  To confuse matters, the monsters that appear here are a jump above the monsters in the desert on the way to Sabasa.  It doesn't matter as there's not much to do here, yet.

Entering the Puppet-master's Tower triggers a cutscene.  This caught me by surprise as the guide I'm working from said the tower was locked and doesn't open in this chapter.  I'm not sure if it was because the person writing the original guide wanted to avoid spoilers, or if the cutscene only triggers under certain conditions (Looking for the item Chrome wants.  Currently not having the item Chrome wants).  Luka is met by a mysterious masked figure.  Luka asks if they have the item Chrome wants and is told it can be found at the bottom of the caves before being evicted from the tower by a mysterious magical force. 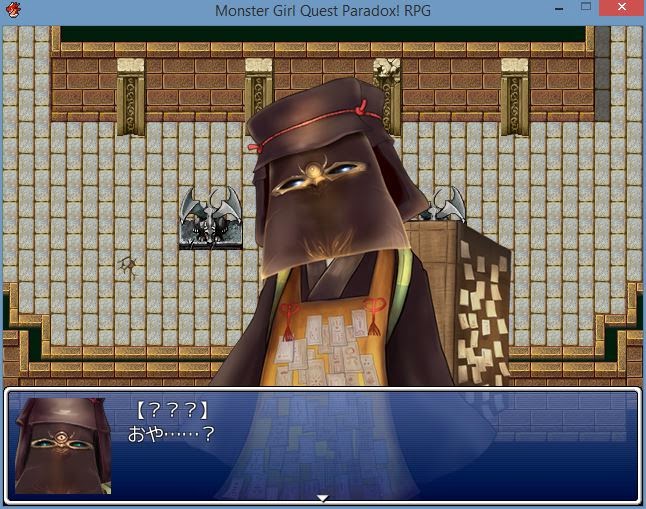 The masked figure is either a mysterious figure known as Shadow Pongee or a servant of them.  Shadow Pongee is a powerful demon that keeps themself to themself.  Alice imparts what she knows on them, and also mentions that her mother warned her not to mess with Shadow Pongee.

Then there's a cutscene in the tower, but it's a bit spoilery, so I'll shift it to the end of the post.

As for Demon Thread Chrome wants, it's in a chest at the bottom of the caves. 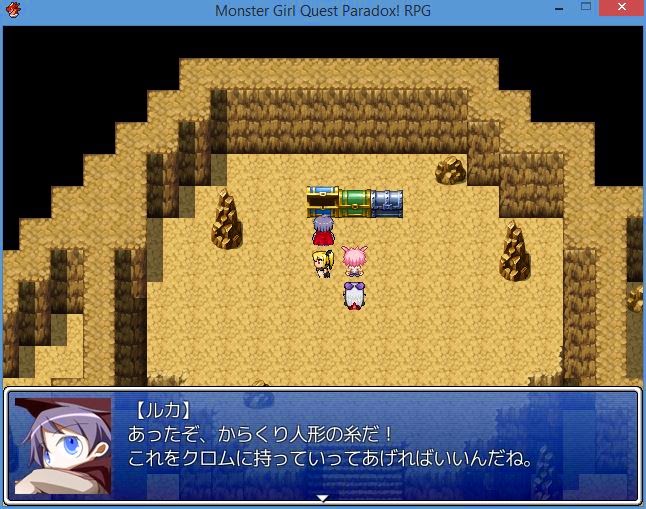 I wasn't able to find the villagers.  I think they might be in the tower (which is now locked).  This is probably not good for them.  Mad scientists need their spare parts…

Now we have the Demon Thread we can recruit Chrome.  Recruiting Chrome also recruits her buddy, Frederikastein.  Chrome is like Eva in that she has a ton of different job levels.  Her stats also reveal what she actually is.  I've been wondering that from the first MGQ series.  Her race is given as Imp, which is a little surprising as sex-obsessed imps develop into the even more sex-obsessed succubi.  This probably explains why Chrome is only a level four imp.  She's too interested in playing around with dead body parts and being little Miss Herbert West.

Next up it's time to head off into the deserts.

And now for that spoilery cutscene.

Back in the Puppet-master's Tower the masked figure is up in the throne room.  Then we get our first sighting of Black Alice in a very literal example of 'power behind the throne'. 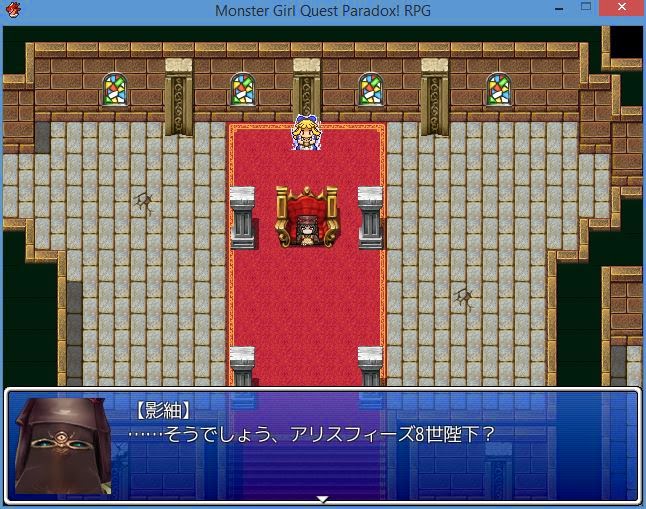 Black Alice is still unequivocally evil.  Oh, wait.  Did I catch that right?  This Black Alice sounds like the same Black Alice from the original story.  She mentions how being infused with the 'White Rabbit' (In MGQ this was an experimental mixture of holy and demon elements that turned already monstrous monster girls into Resident Evil-esque abominations) was not enough to defeat the unblessed hero (Luka, in the original series). 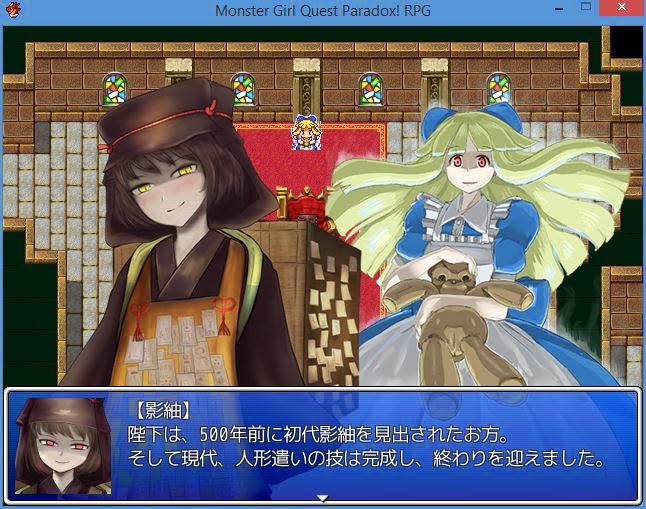 Then we get a whole load of brand new boss characters as the game introduces some new sub-bosses for Black Alice.  I don't think TTR has even spoiled any of these on his website or blog. 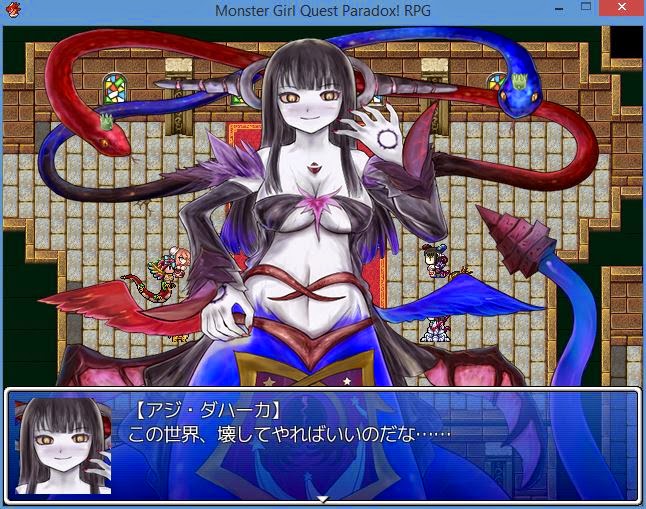 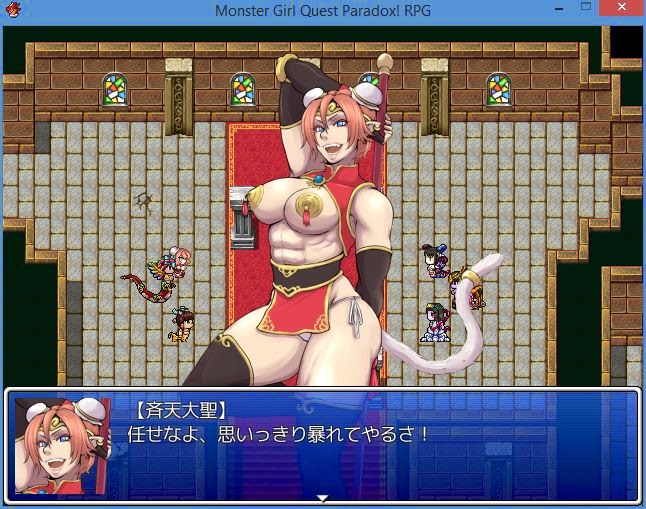 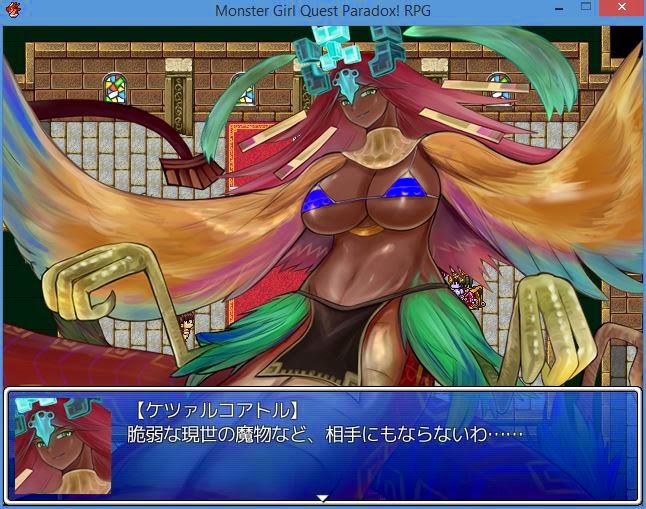 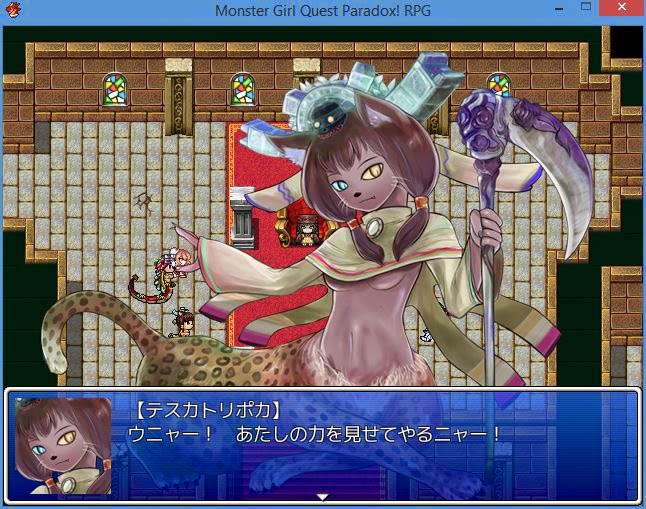 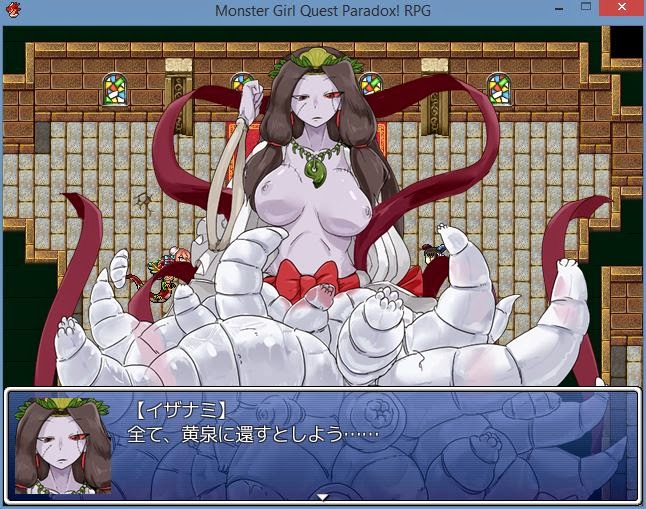 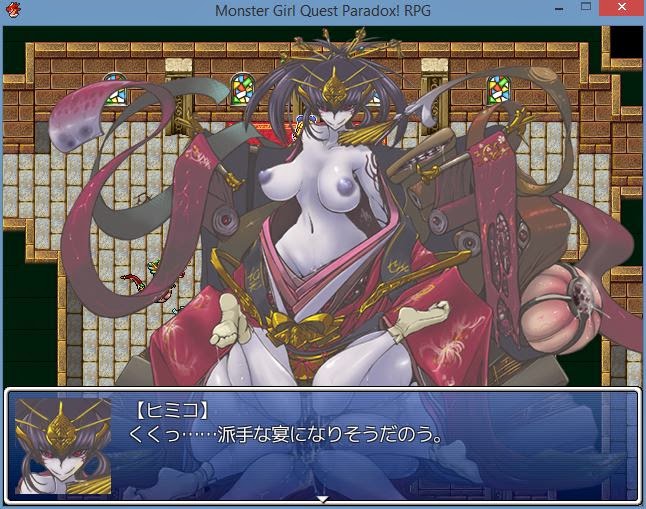 I was too busy taking screenshots to catch names or details on them.  I also wasn't paying attention enough to spot if these were existing boss monster girls or artificial creatures created by Shadow Pongee to mimic mythological monster girl deities.

And that's not all of it either.  Shadow Pongee has been a very busy mad scientist.  She's been using a fusion of zombie and doll techniques to resurrect previous monster lords. 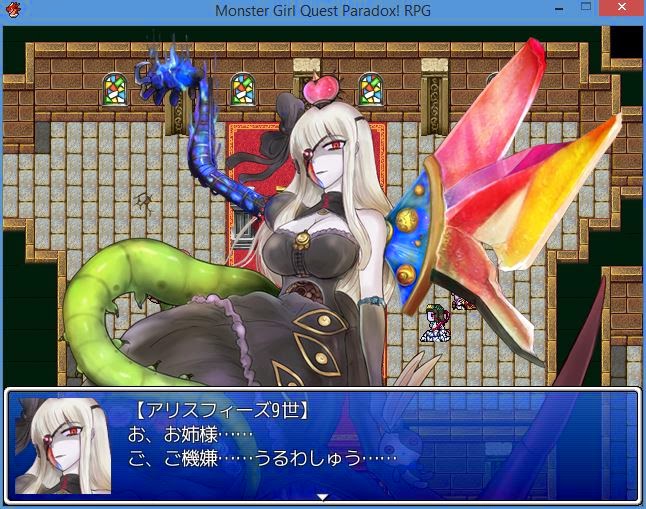 The 10th and 11th (combined into one because much of their bodies was missing): 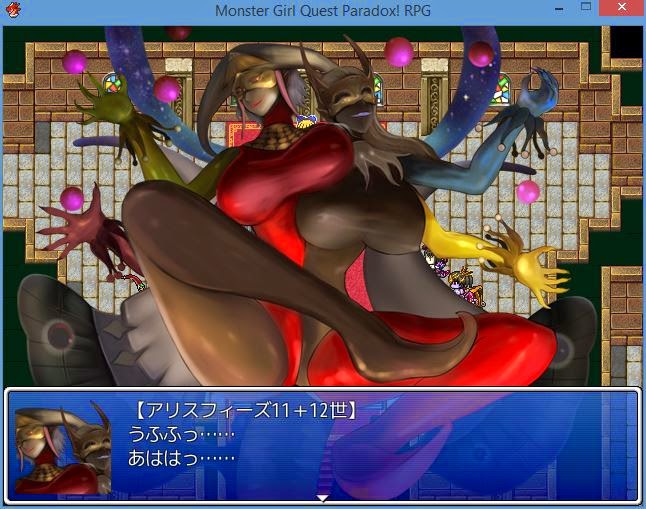 And even Black Alice's own grandmother, the 6th: 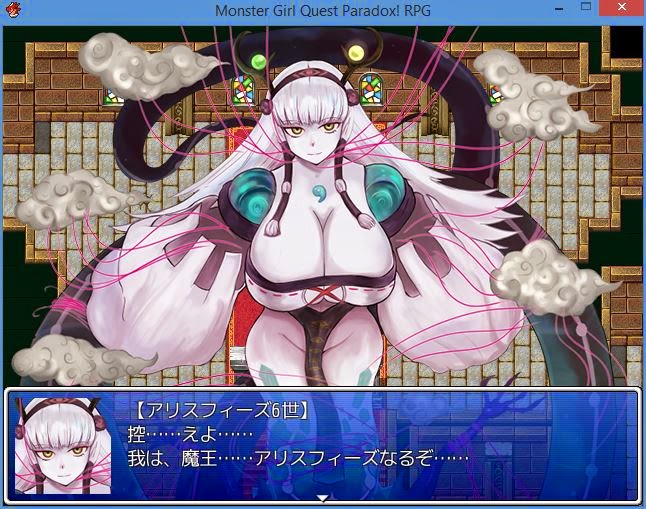 Little Alice, I think you have a lot of unresolved issues.

As for Luka, it looks like a boss rush through the entire Monster Lord lineage is in our future.