The insanity is nearly at an end.  I knew it would be a tough ask (and fun!) to let's play Monmusu Quest: Paradox, and keeping to a roughly daily schedule has been fairly brutal.  But it was asked for and I was going to play the game anyway.  The start of the madness began back here.

We're right near the end.  We went through Tartarus and came out in a dying parallel world.  The only thing here is a tower and at the top is its mysterious master, someone who can hopefully fill in more of the puzzle of what's happening.

(Before I go on a slight correction from yesterday.  I said the tower section was a potential lost forever as the player can't get back to it through Tartarus.  This isn't correct.  As Yuuto Amakawa pointed out in the comments, after the events I'm about to describe below the ruins of the tower appear in the main Paradox world and can be re-explored as usual.)

The master is up on the top floor.  It's a straight run past some bookcases and they're the mysterious figure in black standing at a desk. 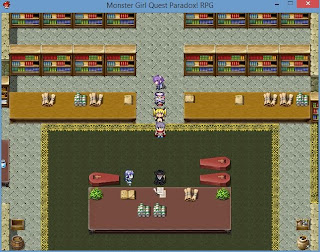 So, is this the final boss fight for Paradox: Chapter 1?  There are other monster girls in the room.  They look like statues of the resurrected monster queens from MGQ: Chapter 3.  They don't interact with the player. 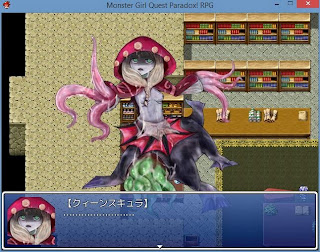 Now, just who is the mysterious master of the tower?  (It probably goes without saying there are going to be a lot of spoilers from this point on) 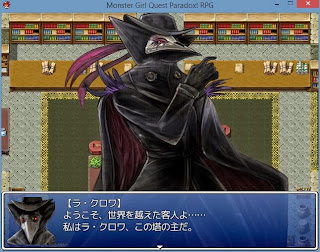 D'oh.  Of course, the coffins scattered around the room and the presence of the zombie queens should have made it obvious.

La Croix is Chrome's sister and was Promestein's villainous right-hand in the original series.  She resurrected former monster queens and turned them into her personal fighting force.

That was her role in the previous series; it doesn't appear to be her role here.  Here she's the last thing holding out against complete and utter obliteration of this world by apoptosis.  She explains to us what happened here.

Again you'll have to excuse my shitty interpretation of very rough'n'ready machine translation.  I imagine this will be a lot clearer when Dargoth and team have completed their full English translation.  Chaos leaked into this world and started to consume everything.  The big surprise is it wasn't something in the past of this world that caused it.  La Croix and others studied it after retreating to this tower.  She gives us a notepad detailing all their findings.  She thinks something went horribly wrong not in this world but a parallel world.  History was not followed.  This created a paradox and the effects of that paradox caused chaos to leak into this world, ultimately destroying it.  Now that same leak is starting to affect Luka's world.

There's another shudder.  Apoptosis, or rather some powerful representative of it, is coming.  La Croix tells us to run back to our world while she tries to hold it off.  Luka tries to talk her into coming with us, but La Croix won't have it.  This world is already lost.  She wants Luka to take what they learnt back into his world in the hope of avoiding this world's fate.  She also tells us to take Radio with us as she's grown fond of her and doesn't want to see the little machine girl broken.

Gameplay-wise, there are no choices here.  La Croix won't let us go back down the way we came in as a powerful enemy is approaching.  The only thing we can do is exit through the pentagram at the back of the room.

After we leave, the agent of apoptosis appears.  I'm not sure what her name is – A-do-ra-na-re-ku?  Translator gives it as Ad Lam Rek.  Some play on Ragnarok? 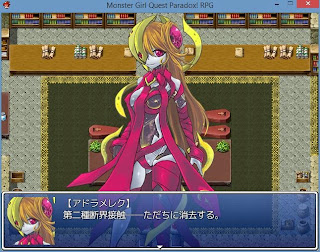 We don't see the fight.  The action switches back to us as we escape a tower that now has chunks eaten out of it. 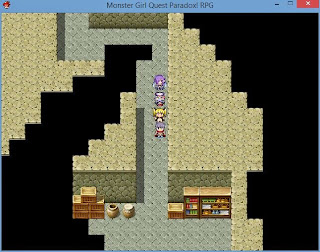 Uh oh.  La Croix didn't slow her down for long.  She appears to block us just as we're running for the exit.  I'm guessing this is the endgame (or rather endchapter) boss.  Her battle with La Croix knocked her down to only 10% power, so I guess that gives us a chance (and is a neat explanation for the power creep problem RPGs always have, where a powerful boss of one area would be beaten to a pulp by the lowliest wandering monster of a future area of the game). 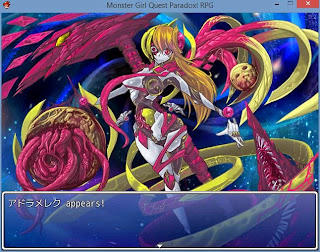 If you lose to her, she gets on top of Luka and slurps up his energy to repair all the damage she's sustained so far.  (through sex obviously – this is MGQ after all!) 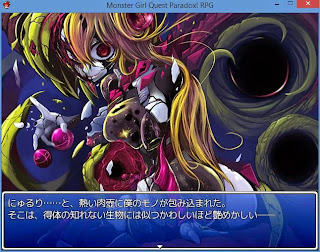 After repairing herself she gobbles up Luka's soul/will with those mouths in ways I don't really understand. 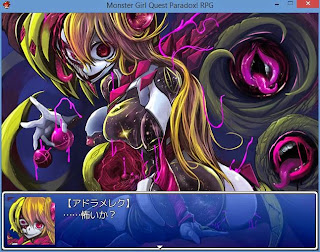 This doesn't happen to us as I manage to beat her despite forgetting to remove bondage ropes off my backline and Ad Lam Rek one-shotting my main priest, Remi, repeatedly.  Yep, probably over-levelled (I'd already hit the level cap of 30 with Luka by this point).

Defeated, Ad Lam Rek fades away and we have to run for it from the collapsing world.

In true Hollywood-antagonist-style Ad Lam Rek is not done yet.  Her damaged and failing form grabs Luka as we're running across the bridge back to our world.  She's determined to drag him down into extinction with her.

Then a mystery person shows up and cleaves her in half with a sword. 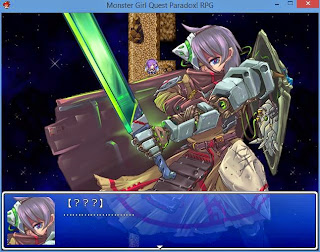 So this is Marcellus, Luka's father.  Badassery apparently runs through the Luka family genes.  Maybe even more so for Marcellus, unlike Luka I don't think he has a half-angel side to draw power from. 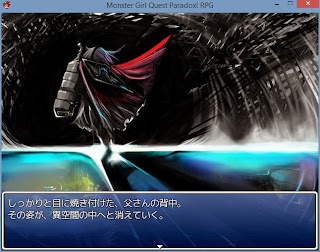 And that's it, credits rolls.  The end of Monmusu Quest: Paradox (although after the credits finish rolling control reverts back to the player, giving us the option of grinding up to challenge Nanabi, Sphinx, even Death).