More teasers for Sandwiched by Succubi

Sandwiched by.  One dude, two sexy babes.  A perfect fantasy... or maybe not... 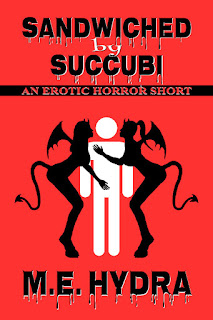 And a little excerpt:

The succubi closed the door behind him.  Eyes smouldering with desire and lips puffed up in seductive pouts, they surrounded him and helped him remove his expensive Armani suit.  They needed no help to remove their own clothing, what little of it there was.  The only things they had on were matching sets of skimpy black leather bra and panties.  A few deft movements and they weren’t even wearing those.

Julian admired the naked, buxom bodies of the succubi.  They admired his naked, muscular form.  He itched to give their naked, buxom bodies a closer examination.  Unfortunately, as much as he wished he was here solely to satisfy his carnal desires, this was not the case.

“Is that the Mark of Glykon?”

The skin of both succubi was marked.  Was it a tattoo or brand?  Either way they both bore a strange circular design on their body that looked like a pentagram made out of crucifixes.  On the succubus with a ponytail the mark was positioned on her belly, just below her navel.  On the other it was located on her left breast, right above her heart.  Assuming she had a heart.

Strange glyphs were positioned at each corner of the pentagrams and equally strange writing ran along each line.  They looked like the kind of tattoo you might find on your typical deadbeat, Satan-worshipping metal head.  Ironically, those marks were the one thing preventing the ‘demons’ from attacking him.

“So, without that you’d both be trying to rip out my heart and entrails right about now,” Julian said.

“Oh no,” the succubus with untied hair said.  “We’d never do anything so crass.”

“It would be a waste,” the succubus with the ponytail said.

The succubi closed in enough for the soft flesh of their sizable boobs to press and rub against him.  Their hands roamed over his exposed flesh, leaving a pleasant static charge wherever they caressed him.  Julian was very hard in a matter of moments.

“We deal only in pleasure,” the first succubus said.

“Wrap your hard cock in our sinfully soft cunts.”

“And you’d spend and spend in our luscious cunts.”

“Until you were all empty.”

“Dried up and empty.”  One whispered in his ear.  Her lips were close enough to brush against him.

Julian was a little freaked out by how much that turned him on.  While screwing hot, gorgeous women was one of life’s finest pleasures, it wasn’t fine enough for him to think his own life was a price worth paying to experience the ultimate of sensual pleasures.  Or rather, shouldn’t be.  This little exchange had given him a glimpse into how dangerously enticing succubi could be.

The two succubi chuckled at his disquiet.  The sound was dark and rich like a delectable dessert you knew was bad for you and yet couldn’t resist taking a second helping.

“Do you fear us?” the succubus with a ponytail asked.

I'm putting the final touches on the ebook.  Look out for it on Amazon, smashwords and other places in the next couple of days.

UPDATE: I've just uploaded the files.  "Sandwiched by Succubi" will be out on the 13th August!