After a sort of drought in good monster girl eroge we get both a new Violated Hero and a new release from Toro Toro Resistance (the person/people behind Monster Girl Quest) in quick succession.  Violated Hero 6 is currently queued up on my hard drive and I'll be looking to give that the Let's Play treatment on the blog as soon as I get around to it. 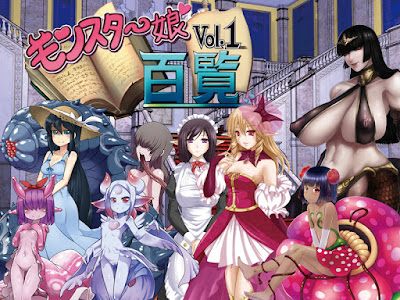 Anyway, calling this a game is rather stretching the term.  Don't get your hopes up that this is a new Monster Girl Quest or Monmusu Quest: Paradox.  In music terms this release strikes me as being like one of those albums/EPs of B-sides and previously cut material bands put out to tide them over between albums.

Monster Musume Hyakuran vol.1 is a collection of Bad End scenes featuring femdom (and frequently carnivorous) monster girls.  If you remember the non-fight scenes in Monster Girl Quest Chapter 3, well MMH vol.1 is those x33 (as in 33 separate encounters, not 33 times more squick, because 33 times the squick of Catoblepas Girl is... a challenge beyond even my little black cells to visualise, maybe).  There are some branching points along of the lines of "Would you like to be digested to mush?" or "Would you like all your sperm/life sucked out?", but mostly these are short stories given the Visual Novel treatment with art and sound effects.

Some of the tales are connected.  There is a long story that will be very familiar to anyone that remembers Resident Evil (Biohazard) 1 & 2, with pornified, monster-girl-arized versions of monsters from those games (and some not quite so monster-girl-arized – Plant 42!).  This was a little confusing to me at first as the first link from the monster girl encyclopaedia entry would take me to the start of that story rather than to the individual scene for that girl.

I should add at this point that everything is in Japanese on the off chance someone buys the product by mistake and ends up with something that doesn't make sense to them.  MMH vol.1 looks like it uses the same engine as the original Monster Girl Quest and plays reasonably nice with the standard auto-translation tools (If you're unfamiliar with how these work, I normally point people here for a full guide – although they are less effective nowadays given that some of the translation websites such as Google Translate blocks Translation Aggregator).  Toro Toro Resistance's work is fairly popular out in the West, so I wouldn't be surprised if some brave soul gets around to putting out an English translation at some point.  Maybe Dargoth, if the poor bloke isn't already destroyed by Monmusu Quest: Paradox.

The art and Bad End scenes are similar in quality to TTR's previous games – variable, but diverse and imaginative enough that you're likely to find something that hit's the spot.  Yes, vore is fairly ubiquitous, but can be avoided if that's not your thing.  As good as TTR is at producing this material at this point, I'd like to see them push on now and maybe see if they can work some animation into the scenes.  Currently the ROBF series* of monster girl battlefuck games does this to good effect, but are difficult to get and play outside of Japan because their creator has a serious hang-up (not entirely unjustified) with Westerners and piracy.

So, is Monster Musume Hyakuran vol.1 worth buying?  This depends on what you found enjoyable from the original Monster Girl Quest series.  If you liked that series for the epic storyline and the cute interactions with Alice and the other characters, but largely skipped the Bad End scenes because you found them squicky, then MMH vol.1 might not be for you.  However, if you ploughed through that series and relished every imaginative and (usually) sexy fate Luka suffered at the hands of the various amorous (and sometimes hungry!) monster girls, MMH vol.1 is 33 brand new Bad End scenarios that will likely keep you entertained for some time.


(*As an aside, I would love to do a Let's Play series on one of the ROBF games here, but there's virtually no chance of this happening as I'm a) unable to legally purchase them, b) would be unable to get through the Japanese 'gatekeeper' puzzles designed to keep out foreign players, and c) would likely get DMCA-ed to oblivion if I tried.  This is a real shame as the ROBF series is very very good from what I've seen of it.)
Posted by M.E. Hydra at 16:12