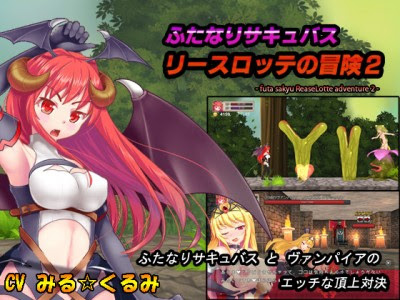 You play as futanari (dickgirl) succubus ReaseLotte.  An ancient vampire has awaken and the game sets ReaseLotte on a quest to regain her power from this upstart vampire bitch.  Or something like that.  The game is made using Unity and as I don't have the first clue on how to hook AGTH/Auto-translator up to this one, I'm afraid the plot is going to have to take a back seat this time.  Fortunately, as Futa Succu ReaseLotte 2 is a fairly straightforward platformer, this isn't that much of a problem.

Gameplay-wise, the player has ReaseLotte jump, shoot and whip her way through five levels filled with naughty monsters eager to have their wicked way with her.  The player can pick up coins which can be spent to improve ReaseLotte's HP and damage output.

There are five levels, each terminating in the obligatory boss.  Each level has a decent variety of enemies, each with their own H-scene.  Enemies are either monster girls or non-anthro soft-vore staples such as slimes, frogs, plants, molluscs, etc.  There aren't any male enemies such as orcs or beastmen to ravish (or be ravished by) ReaseLotte, which will either be a good thing or a disappointment depending on where your kinks lie.  As for those kinks, ReaseLotte gets swallowed a lot, which will appeal to vore fans who like seeing naked sexy busty girls getting ingested by slimy giant worms and the like.  If she isn't being swallowed, she's being jumped on by various amorous monster girls, which will appeal to lovers of monster girls and girl-on-futanari action.

While it's great to see fully animated H-scenes in 3D, the graphics are merely okay rather than mind- (or rather dick-) blowing.  For a 2D platformer, it's a little too pedestrian in the action stakes.  ReaseLotte handles okay, but it's clear gameplay was not a primary focus here when compared to solid-platform-games-in-their-own-right like Eroico.  While the rest of the game played fine, I did experience bugs in the sea level where ReaseLotte would sometimes fall through the floor and get stuck.

Overall I found it a little meh—reasonably well put together, but not hitting any of my sweet spots.  This is likely because it falls just outside my own H-preferences.  Both futa and non-anthro vore don't do a great deal for me and I prefer playing the character being ensnared by the succubus rather than the other way around.  Futa Succu ReaseLotte 2 also lacks the crazy WTF-ness of games like Demon Angel Sakura to hold my attention even if the H-action leaves my loins resolutely indifferent.  If you like futa succubi or seeing busty women getting swallowed, Futa Succu ReaseLotte 2 will be a game you might want to give a closer look.  If not, you can safely give this one a miss without worrying you're missing out.
Posted by M.E. Hydra at 12:00