Now I have definite blacklist concerns with Literotica 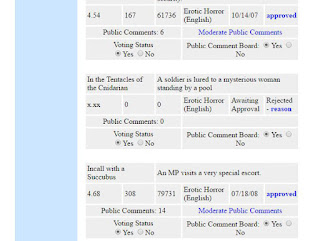 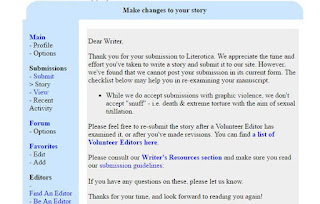 "In the Tentacles of the Cnidarian" is the fancier name I gave to the H-space Monster Girl Bestiary story I posted yesterday.  I don't normally post the H-space bestiary stories to Literotica as I consider them sketches to show off monster girls I might use later rather than completed stories.  After the problems I had with Succubus Summoning 213 I thought I'd submit the Cnidarian-Girl story as an experiment and... well... the results are a little worrisome.

Literotica normally takes 3 days to reject/approve a story.  This one was bounced in less than 24 hours.

The reason they give for rejection is snuff.  While technically this is true - there is sex and someone dies - I find it a little odd considering that the majority of my stories currently up on Literotica are succubus Bad End stories where the protagonist has mind-blowing sex with a succubus/monster girl and then gets their life drained or worse.  These are Erotic Horror stories after all.  I'm trying, but I can't see how the Cnidarian-Girl story is any 'snuffier' than the one where Nÿte bit someone's eye out, or the one where a character had all their skin ripped off.

The other possibility is I've pissed someone off (maybe politically with this anti-SJW #GamerGate story) in a position to make things awkward for me.  Given the seemingly arbitrary nature of the recent rejections and how they don't make sense when compared to the other stories I've had accepted, I am now concerned I might have been blacklisted.

Anyway, I've PM'ed the owner of the site and hopefully they'll clear up what's going on.

I've submitted a lot of stories to Literotica over the years and I'd like to continue doing so... if they'll let me.
Posted by M.E. Hydra at 16:14

Email ThisBlogThis!Share to TwitterShare to FacebookShare to Pinterest
Labels: Literotica