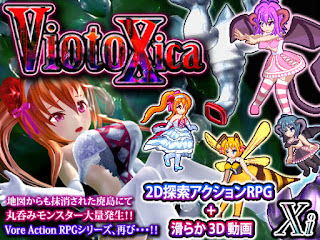 I wasn't able to get any translation for this as AGTH continues to implode everything it touches in Windows 10.  In this case it didn't matter too much as ViotoXica is an action game in the metroidvania vein.  The game has various upgrade paths for the main character as well as a shop system where you can buy extra sockets to upgrade weapons and armours.  This is more for higher difficulties though.  If you just want to play for the H- or rather vore-content, you can stick the game on the 'Super Easy' setting and breeze through fairly easily without needing to understand the more complex mechanics.

As with metroidvania games, a large part of the gameplay consists of finding the upgrades and keys to open up more of the map.  Upgrades include double-jump, high-jump, roll, and some kind of heat shield.  Even without knowing Japanese I was able to mostly figure out what was needed where without too many problems.  Up Arrow + Menu Button (V) to reveal the whole map is your friend when it comes to figuring out where to backtrack.  Although one improvement I would have liked to see is the colour-coding extended to front-on doors on the map as well as the side-on doors.  The one time I did get stuck was because I forgot about a locked red door on the top right of the map because it was one of the face-on teleport doors rather than a side exit.

I will commend Xi on their game-making skills.  The main character handles really smoothly and it plays like a good metroidvania game.  I almost regretted playing on Super Easy and therefore not needing to learn the nuances of the upgrade system, but then I remembered how terrible I am at 2D (or 2.5D) platformers.

One weird thing about vore games is YouTube appears to have less qualms about showing footage from them as opposed to something like Monster Girl Quest, which is theoretically possible to upload... providing you have plenty of black squares on hand to cover most of the artwork.  Anyway, there is a trailer for ViotoXica that provides a taster of the artwork, gameplay and (surprisingly good) music.

Now, onto the important stuff - the filthy snu-snu.

First off, this is a vore game.  That means a good chunk of the enemies are going to be worms, plants, frogs and the like, and they're not going to auditioning for an appearance in anyone's wet dreams anytime soon (unless those people happen have very... specialised tastes).  There are 13 enemy types total.  Six of those are what I would class as monster girls - two types of succubi, bee girl, arachne, sort-of-alraune and a butterfly demon girl as the final boss.

Most of the game is 2D (or 2.5D - some sprites look hand-drawn and others like 3D models).  Each enemy has a grab attack that will result in the main character being swallowed and a Game Over regardless of their HP total if they don't break out of it.  This is seen first as a 2D animation on the main game screen... 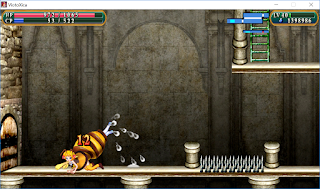 ...and then, after the Game Over, the action switches to a much more detailed 3D clip of the heroine getting gulped up... 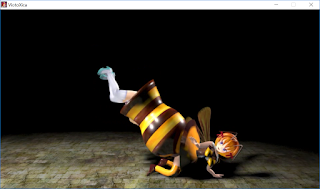 ...and then bouncing around inside something's stomach with the obligatory ryona-style clothing destruction. 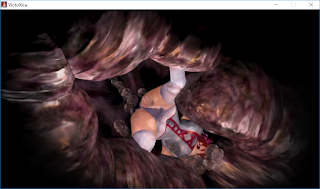 I'm not a hardcore vore enthusiast.  My interest lies in the overlapping Venn diagram of sexy monster girls being sexy-evil and dominant (in this case having a rather more literal interpretation of "I want you inside me" than most would consider comfortable).  For this type of game I'm looking for a bit of flirt from the monster girl before her victim goes down the hatch.  Or, failing that, scenes of such sublime ridiculousness (such as Demon Angel Sakura's giant farting fairies) I can have a chuckle and admire the creator's depraved inventiveness.

Viotoxica is a bit light on that.  The Bad End scenes are rather thrashy, with slobber flying everywhere as the magical girl princess gets gulped down.  The churning animations are also a little too exaggerated, unless one of the magical girl princess's magical abilities is to change into a big block of crystal after being swallowed.  Bear in mind this is a subjective criticism from someone on the borders rather than being at the centre of the target audience.  If you're more into the ryona side of things, these are not negatives at all.

Another disappointment was the sameness of the monster girl Bad Ends - monster girl opens out her tail or abdomen like a trumpet and hoovers up hapless magical girl princess.  It looks okay for the succubus-type monsters, but a bit ridiculous for the arachne.  The exception to this is the final boss.  I'm not going to spoil it here, but it was certainly different...