Lorks o'Lordy.  You wait ages for a monster girl game and three come out on the same day.

First up we have Demon Angel Sakura vol.4. 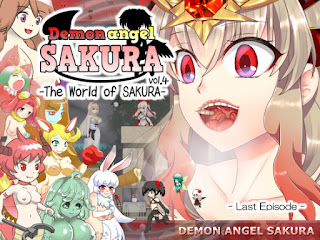 Long time followers will be familiar with this series.  I've already reviewed vols 1, 2, and 3 on the blog.  This is the 4th and last entry in the series.

It's a 2D platform/action game where you control the diminutive Sakura as they fight off various hungry monster girls eager to eat him (her, them?).  The first two games were boss rushes.  The third added a lot of random mooks, each with their own animated Bad End scenes.  The fourth carries on the changes introduced in the third.

Oddly, it's not actually completed yet.  The creators fell behind schedule, but decided to release what they had with the final area (and 3 bosses) to follow early next year.  Despite this, there's still plenty of content with 3 bosses and 15 or so mooks.

I must admit Demon Angel Sakura never really turns me on that much.  Normally this would be a failing for an eroge, but I'm mostly playing to see what ridiculously over-the-top indignities are heaped on poor Sakura in the imaginative Bad End sequences.  The game rarely disappoints.

I've already bought this one and will bring you all the vore-y details in a couple of days or so.

Next up we have Drain Dungeon. 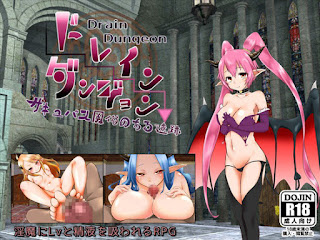 I played this demo a few weeks back after seeing it mentioned on ulmf.org and it looked interesting.  It's a dungeon crawler, but with the dungeon abstracted to a linear sequence of left or right choices (similar to what Desire Dungeon did).

The main gimmick here is that the hero (i.e. you) is always reset to level one upon leaving the dungeon, so a trio of enterprising succubi strike up a deal to... um... "drain" those levels from you before leaving rather than letting them go to waste.

The dungeon also has some additional H-content provided by various monster girl bosses.  I ran into and afoul of a slime girl in the demo.  The rest of the monsters were the standard stock RPG Maker sprites, so there is a danger the game might get too grindy and repetitive later on.

The biggest problem I found is that the game uses the Wolf RPG Maker system and that traditionally hasn't played very nice with text-hooking.  I like the premise and it looks interesting, but I'll hold off on getting it until I can find the h-code (or alternate text hooker) to make it translatable.


The third game out today is Bifrost's Brothel of Mamono. 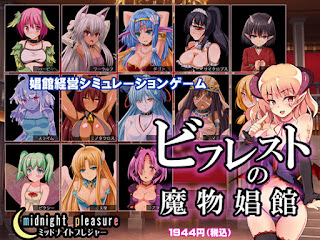 This is a genre I don't look at too often - the brothel simulator.

The back story is that you've ended up in debt to the devil/some kind of succubus and have been whisked off to an alternate world to run a brothel in order to pay it off.  Unfortunately, AGTH failed to hook this one at all, so I wasn't really able to work out what was going on in the demo.

From what I saw the gameplay appears to be purchasing captured monster girls off slavers, breaking them in with various sex stuff and then pimping them out to clients to bring in the cash.