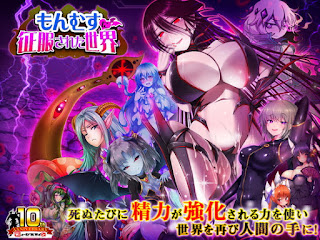 Dieselmine are the people behind the Violated Hero series and they have a pretty decent track record when it comes to making games catering to the monster girl fetish.  I wrote about their previous games here, here and here, and was even mad enough to do full walkthrough series of VH4 and VH5.  Generally, Dieselmine tend to be weak on gameplay mechanics and strong on eye-candy when compared to other monster girl games like Monmusu Quest: Paradox and the ROBF series.  VH6 went a bit weird with machine girls to cash in on the KanColle craze at the time and I didn't really get into it.

Monmusu Conquered World has a different title, but it could just as easily continued the series as Violated Hero 7*.  It has the same structure of a series of sexy boss monster girl encounters with some fairly generic game mechanics padding out between them.  I'm guessing Dieselmine did the title switch to avoid sequel fatigue (6 wasn't very good IMHO) and timed it to come out to ride on the coattails of Monmusu Quest: Paradox part 2.

Given that I can't get any sort of machine translation to work at the moment, I initially expected this post to be another: "Hey, here's a new monster girl H-game that looks interesting.  Won't actually post anything of substance on the game because I can't read enough Japanese to play it."  Then I tried out the demo (which generously gives players the first two bosses - a gang of adorably cute goblin girls and an arachne with dubious table manners), realised I could actually "play" this to some extent, bought the game and have so far liked what I've seen.


But that's enough preliminary flannel, let's talk about the game.

The plot seems to be the typical Violated Hero storyline of a "hero" taking out one sexy evil monster girl after another on his way to take down the demon queen.  I say "hero" because in these games you're normally playing some poor, hopelessly under-qualified lad spending more time being the sexual plaything of the demonesses rather than fighting them.

One of the weaknesses of the monster girl H-game genre is that to get to the sexy Bad End H-scene content (you likely bought the game for), you have to lose.  Monmusu Conquered World gets around this by adding a plot device to justify integrating all the Bad End scenes into the main pathway.  The hero falls off a cliff at the start of the game, but rather than dying he wakes up with a magic sword that tells him he's the chosen one to fight all the demonesses.  That goes about as well as you'd expect and he gets cum-sucked to death by the first monster girl he comes across (a harpy)... only to get resurrected stronger than before.

This follows through into the boss fights.  They all follow the same structure:

Round 2:  Typical turn-based JRPG combat.  The player can win or lose depending on whether they can be bothered to use proper strategy.

If you still lose:

Round 3:  Cakewalk fight.  The monster girl likely only does scratch damage at this point and the player will probably win in three or four hits.


I like this.  No nonsense.  Monmusu Conquered World knows what most of the audience are here for and isn't afraid to just be a string of sexy Bad End scenes for people that want to experience it that way.  While I haven't had a chance to check it out, I'm guessing the higher difficulty setting is for players that want to be challenged by proper RPG boss fights.

However, the one problem with the always-auto-lose-round-1 approach is that if there's a monster girl where you don't want to see the sex scene, tough, you're going to see it anyway.  The plot demands it.

As with the Violated Hero series, there are some basic gameplay sections between each boss fight.  In this case they've gone with the stealth JRPG option.  The player has to run from one side of the screen to the other without being caught by the various roaming succubus sprites.  If the succubi do come into contact with the player sprite, a H-scene plays and the player has to struggle free before all their energy is drained.  It's not too challenging and even if the player runs out of energy and lives, choosing the continue option just puts them back to the start of the level (which aren't particularly long anyway).


None of this is exactly revolutionary gameplay, but I don't think there's any shame in a h-game not trying to be anything other than an excuse to string a bunch of sexy content together.

The sex content in Monmusu Conquered World is pretty sweet from what I've seen.  There are the obligatory Bad End H-scene CGIs, which are nice, but in this case I think are overshadowed by the cut scenes when caught by the generic wandering monsters.  These are animated and look pretty damn hawt.


When they're not one-shotting the player in round one, each of the monster girl bosses also has an animated sex attack they can use.  This is not the first time Dieselmine has done this.  In previous Violated Hero games the monster girls had animated sex feeler attacks that looked okay for monster girls where you'd expect to see that kind of attack (Alraune, succubi with tailpussy) and really out of place for others.  Monmusu Conquered World fixes this by stepping up from generic feeler animations to proper animation loops of different sex acts for each monster girl boss.


And a whole host of other stuff as well.

Monmusu Conquered World does the animated scene snippets so well it's a shame they didn't incorporated them into the Bad End scenes.  It's especially noticeable with bosses like the mermaid swarm where the Bad End CGI is a static version of their penis-licking attack.  Maybe animating the full picture takes too much work and only animating part of it doesn't look right.

The artwork is by a mixture of artists, most of which will be recognisable thanks to their work on other games.  Most of it looks good, but does have the same different-styles-clashing problem the Monster Girl Quest series has, which is surprising given most of the previous Violated Hero series was fairly consistent with the art (okay, the Bad End CGI art.  I remember the weird pixel art wandering mobs of VH1 and 2).


I haven't completed the game yet, but what I've seen so far seems pretty decent.  The price might put some people off as it's on the high side for this type of game.  Also, if you're expecting a complex RPG experience like ROBF or Monmusu Quest: Paradox, this game isn't going to scratch that itch.  It's fine for what it is though, and if you can machine translate/read Japanese to understand the plot and all the sexy taunts of the Bad End scenes, even better.

It's been a while since we last had a Let's Play-type series on the blog.  I'm thinking Monmusu Conquered World is simple enough that I might be able to do something with it.  Of course there will be a lot more guesswork than usual given I'm going to be completely blind on the text and dialogue, but we might still be able to have fun with it.  Watch this space!

*while editing this I realised I might be confusing dev and publisher here.  If the devs are different that would be a fairly obvious reason why this isn't called Violated Hero 7!
Posted by M.E. Hydra at 16:58