Before I jump into a Monmusu Quest: Paradox [part 2] playthrough I thought I’d do a quick recap of what happened in [part 1], especially considering it’s been over 2 years since that game came out.  Of course, you can always read through my original Let’s Play of [part 1], but be warned, it is 50 parts. 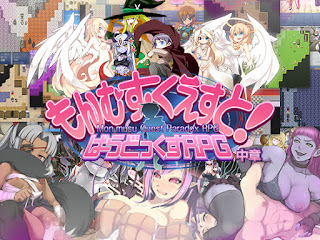 The original Monster Girl Quest saw the player take the role of Luka as he travelled through a fantasy world filled with sexy (and dangerous) monster girls.  Accompanying him was the Demon Lord Alice.  Eventually they hook up rather than killing each other and save the world from the mad Goddess Ilias.

Monmusu Quest: Paradox is set in an alternative reality version of that world.  Paradox’s world had some sort of catastrophe befell it in the past, opening up pits to mysterious locations known as Tartarus.  The main Goddess (and major antagonist of the first series) Ilias has been missing since this event.

As with the original series, the game starts with Luka about to embark on an adventure, and while the route he takes is similar to that of the “classic” Luka, there is a lot of multi-dimensional weirdness going on.

She’s described as Luka’s childhood friend, except she didn’t exist in the original series universe and various characters seem to think she shouldn’t be present in this reality either.

Then we have the White Rabbit.

The White Rabbit sealed Alice’s powers away and while she acts as a hindrance most of the time, it appears to be to force Luka down the same path as “classic” Luka.  It’s not stated why, but there are hints that the world is at risk of being consumed by chaos if Luka doesn’t follow the “correct” path.

The world also has other problems.  Luka already resolved Sara’s succubus nature emerging early in Sabasa in part 1.  Grand Noah supposedly has a malign monster girl pulling strings behind the throne and Grangold has gone to war with everyone.

The monster girl world is also in turmoil.  Since Alice got lolified by the White Rabbit, three contenders have arisen to contest the vacant throne.  One of them is Alice’s mother, Alice the 15th, which is confusing to our Alice (the 16th) because she thought her mother was dead.  Another is Black Alice (the 8th Alice and the secondary antagonist from the original series).  She’s currently trying to raise an army to challenge Alice the 15th and was shown in part 1 with an army of former demon lords and legendary monster girls resurrected as dolls.  The third is the mysterious Alice the 17th, who also shows up together with the equally mysterious Nero.

There are strong hints that Nero and Neris are Luka and Alice’s twin children from the other “classic” reality.  What they’re doing here hasn’t been made clear, but they appear to be on Luka’s side.

Slotting into the role of initial antagonists are the three shikibus sisters – Morrigan, Astaroth and Lilith.

They’re the ones behind the harpies turning into uncontrollable nymphomaniacs, the Queen of the South Seas being turned into a dried squid, Sara going full succubus and fucking up her kingdom, and about 90% of the problems Luka encounters on entering a new area.  They also fucked all the male inhabitants of Luddite Village to death, but that was probably doing the world a service, to be fair.

Despite their obvious villainy (including both Morrigan and Astaroth being more than happy to sexually drain Luka to death if given the opportunity) they also appear to be following a higher purpose.  As with the White Rabbits, their manipulations appear designed to force Luka down the same, or similar, path to “classic” Luka from Monster Girl Quest.

Part 1 culminated in Luka and party investigating the third Tartarus region.  This took them to a lonely tower in an alternate future where the world was dead and the remnants in the process of being consumed by chaos.  It was rather sad as the little robot girl Radio took Luka’s party through various rooms and showed them the memories of both humans and monster girls trying, unsuccessfully, to stave off the end.

In another twist, the last remaining survivor at the top of the tower turns out to be La Croix.  La Croix was a villain (of the tragic sort) in the original series.  Here, she knows her world is doomed and she passes on her research notes to Luka in the hope he can prevent the same happening to his reality.  She then sacrifices herself to delay Adramalech long enough for Luka to escape back to his own reality.  This fails, but at least she does enough damage to Adramalech for Luka and party to finish her off.

As they try to escape the collapsing reality, Adramalech returns to try and make sure Luka dies with her.  It takes a surprise intervention from Luka’s father to save Luka and friends.  The reunion is short-lived.  Something has gone seriously wrong across multiple realities and Luka’s dad is trying to fix it.  He leaves, telling Luka to go back and save his own world.  Luka has La Croix’s notes, but he needs to find the La Croix of his world to decipher them.

And that’s where Part 1 left off.  Join me on Monday as the Let’s Play of Monmusu Quest: Paradox [part 2] begins!