So far Monmusu Quest: Paradox [part 2] has done pretty well in throwing new monster girls at us.  The only repeats so far have been Dagon and one of the mermaids.  And if you happen to like Arekishi’s big-boobed paizuri scenes, well… 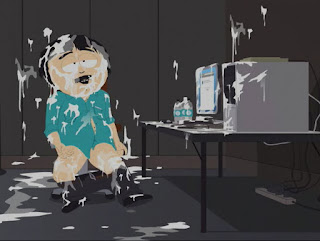 Your brave sacrifice will be remembered, but forge onwards we must.  There are many more monster girls to fuck is a world (possibly many) in need of saving.

The next location is Finoa, which is north of the Navy HQ and can be found here:


And the originality comes juddering to a halt.

In the countryside around Finoa we can find centaurs...


We’ve slotted back onto Luka’s path from Monster Girl Quest [chapter 2].  These were the first three monsters en route to Grand Noah if I remember right.  Centaur was a training fight to see if you’d remembered you’d picked up Gnome.  Forget that and you ended up wedged against a tree and stuck in wrong horse pussy.


The froggies have three request scenes back in the pocket castle – a tongue job, a communal tongue job and a frog sandwich with Luka in the middle.  I’m not sure if any of these are new.  In their first appearance I remember they had different Bad End scenes depending on how many Luka had knocked out before succumbing.  Maybe the tongue job scene is new.


Not much else new here, but as Torotoro Resistance is trying to remain faithful to his original series, it makes sense.

Finoa is also a bit nothingy.  I am back to relying on machine translation, so it’s possible I might have missed a quest somewhere.  Aside from that, the NPCs here are mostly just information sources for the new continent.  From them you can learn that:

The next Tartarus location is west of Grand Noah and difficult to get to as it’s right in the middle of a lake.

There is another disappeared village.  Just like Rubiana in part 1, all the inhabitants of Esta have mysteriously vanished.

There’s lots of talk about avoiding the draft to fight the war against Grangold, which doesn’t appear to be going very well.

Despite all the war, people are still excited about the Queen’s Cup held in the coliseum of Grand Noah.  Ah, I remember that from the original series.  When you lost, you got fucked in front of the whole audience.  Good times.  Does this also mean we might be seeing a first appearance from Alma Elma?  The heavenly knights were conspicuously absent from the first game (aside from a recording/hologram of Tamamo).

Yamatai Village, another location from the first game, also gets a mention.  Alice advises visiting Grand Noah first to upgrade gear as the monsters on the way to Yamatai will be too strong for us currently.

Lastly there’s mention of a mysterious school of magic, which, I believe, is a new location.


My Luka might be a teensy weensy bit on the over-levelled side, so it’s not exactly a contest.  Ironically, she drops Cat Gloves, an accessory that bumps the rate of finding items to %150.  If I’d had that earlier, my Luka might be a more sensible level than 40 (that damn Grizzly Bear rare drop, grr).

As an aside.  In the first game I levelled up a lot of characters in Merchant for the buff to gold drop.  If you’re a completionist, I’d recommend following the Fortune Teller/Gambler path instead as these give abilities that improve item drop rate and trying to get the rare item drops is by far the biggest grind when it comes to removing all those ??????s from the library profiles.

Anyway, there’s not much going on in Finoa.

(I’ve botched a translation and missed something, haven’t I?)

Time to head off to Grand Noah.