Monster Girl/Succubus H-games on my Radar

As I've stated before, I haven't played many of late because of problems with getting Machine Translation to work on my computer.  (I could solve all this by actually learning to read Japanese, but unfortunately I'm English, and we're congenitally awful at picking up other languages).

Thankfully for us gaijin slobs, other solutions are starting to appear.  DLSite has been posting some products with English translation (of varying degrees of quality) and other talented folks have made or are making English translations of juicy succubus smut games. 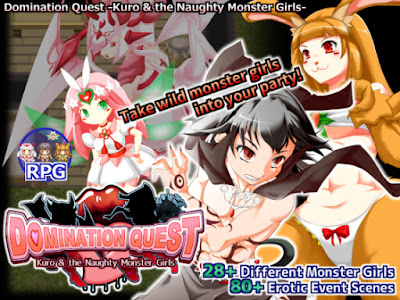 AKA the brand new one, as it came out yesterday (the day before?).

I would caution against picking it up just yet.  It looks like the creator rushed the game out a little too soon and it's extremely bug infested.  I hit a game-breaking bug within the first half hour where I couldn't continue down a path because the game kept putting the character sprite on the exit point of the new screen, promptly looping the player right back to where they'd just come from.  I've seen comments that this can be avoided if you hit the right spot on the screen, but I haven't found it yet.  The same people have also reported encountering lots of crashing problems later in the game.

I have it and it looks interesting enough that I will write about it once the current broken stuff is fixed.  For now I'd advise staying clear until a patch or two has dropped.

While checking back to see if Domination Quest had been patched, I noticed the English version of Drain Dungeon sitting in my DLSite game library.  This surprised me as I don't remember buying it.  I think what might have happened is DLSite gave me the English translation as a freebie as I already owned the original. 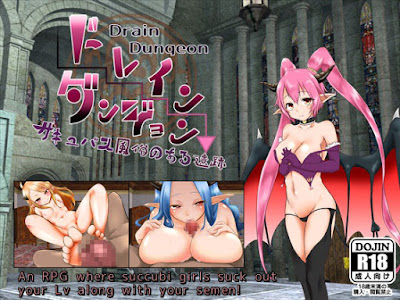 This is an old one.  2016, I think.  You stomp down an abstracted dungeon and then spurt all your accumulated levels inside a trio of succubi on the way out.  I think I played it a little a while back.  Now, with the English version I can give the whole game a thorough...

Actually, scratch that.  I must be getting senile as well as old and fat.  I already wrote a full review of this back here, including delving all the way down the final (and hot!) succubus boss.  The fact I can't remember this is probably not a good endorsement for the game.

Oh well, it might be fun to have a playthrough where this time I actually know what all the items do.  (And have all that delicious draining done in English-text Bad Ends.) 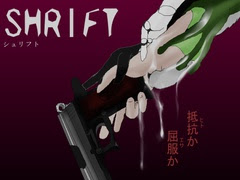 This level of detail on the battles combined with an artist like Setouchi or Shiki would be my dream monster girl H-game combo, I think.

There is a workable English translation patch for the game.  I haven't managed to delve too deep into it yet.  The game also has a bit of Undertale's quirk to it.  The obvious influence is in the separate genocide and pacifist routes, but it also seems to be doing similar funky meta stuff with saved games.  This makes going back to redo various "fights" difficult as the character isn't there anymore.  My last run sort of petered out because I managed to get myself trapped in a fight versus the doll girl that was virtually unwinnable with the equipment I had.

I'm tempted to run at this again and give it the full let's play treatment. 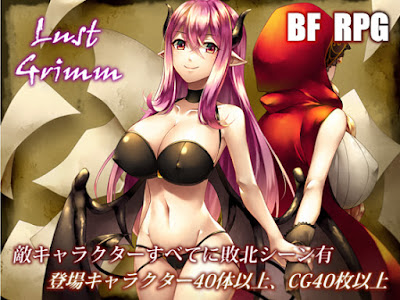 Another game that has been recommended to me multiple times in the comments.  I was iffy on the demo.  The art style looked delightful, but the Bad Ends seemed short.

A lot of this was because I was playing with no English.  Translation team =Together= are working on a full translation of this (They've already translated Succubus Prison).  I have played the translated demo and can definitely appreciate the game a little more.  As with Succubus Rhapsody, there's a lot of sexiness in the text of the battles.  Now I'm eager to play the full thing when the complete translation is done.


Because of my translation issues I haven't been keeping as close an eye on interesting H-games as I'd like. Domination Quest is new, but both Lust Grimm and Shrift have been out for a while (although Shrift is using a chapter release model, with the fourth and final chapter not out yet).  If you've spotted any other juicy succubus games, let me know in the comments.

I am tempted to run another let's play type thing again (but maybe not as detailed as the Paradox series).  I'm nervous of doing them because of time that could be spent writing, but I also don't like leaving the blog empty for too long when I'm working on longer projects.  Having something at the forefront that's quick and easy to put out might make for an appropriate screen for those times when I want to be working on larger-scale project in the background.  I don't like the regular update posts.  They're great when things are running smoothly, but end up doom-spiraling my mood pretty quickly when I fall behind.  I think I might have to learn the time-honoured corporate strategy of keeping shtum until I can properly wow people with a new thing.

(For instance, it would have been far better if I'd not told people about the boob monster story and just released it when it was done, rather than fucking up the time estimations, again!, and have people wondering where the fuck is this story and why is it so goddamned late?)
Posted by M.E. Hydra at 20:00