Because things haven't been chaotic enough recently, I decided to grab a last minute week in Prague with the money I'd picked up recently from my other, occasional, non-writing work.  I didn't go anywhere much last year and felt a change of scenery would do me some good, blow some cobwebs out, that sort of thing.

Ostensibly, the purpose for the trip was an event happening at the weekend, but I managed to find a good deal on a flight and hotel for the whole week and decided to go for a few extra days.  I wanted to try out the whole Bohemian writer thing of buggering off to some cheap hotel somewhere with no distractions to blast some words out.

Some notes on that.  When looking for a cheap hotel, try not to go too cheap.  Make sure you get a room with something resembling a desk, or failing that, at least a downstairs bar you can hang out in.  Mine had a bed, en-suite and a thin strip of hallway.

I'm not going to say much more on it, given how poorly I managed expectations last year.  I have a target in mind for it, and if I hit it, I'll let you know then.

I was also in Prague for... ahem... research purposes. 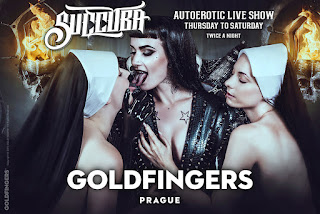 A few years ago I got dragged into one of the strip clubs off the main tourist street.  I'm not really a strip club person - it's like a steakhouse where you only get to sniff the steak as far as I'm concerned - and the ones in that part of Prague have terrible reputations as tourist traps.  So there we were, supping over-priced pints of beer, and then the lady above comes out with full devil-horn regalia and does some rather questionable things to a nun onstage.  It was a little unexpected.  I wasn't expecting to see a full burlesque-type sex show at a place like that.  It was... dare I say it... weirdly classy.

The new show is a bit more straight to the point (or straight to the fist).  Goldfingers itself was a pleasant surprise.  It knows what it is, but is very professional about it.  One little detail I noticed was when a nervous bespectacled guy botched the process of tipping a dancer.  You're supposed to lie on the stage with the note (a custom one of the club's, I believe) in your mouth.  The dancer then straddles the tipper for a mini-lap dance before taking the note.  The bespectacled guy tried waving his note around aimlessly from the side of the stage.  Now, if you're dealing with the stereotypical seedy strip club, the dancer snatches it off him with a bored expression and wanders off back stage.  In this case the dancer got him to lie down and do it properly.  It was very much - "You will lie down here right now while I rub my boobies in your face."  I did like to see that.

The night's highlight was when Succuba and a friend with a gorgeous tattooed body dragged someone up on stage for what I imagine is the typical stag package.  Down came the trousers and out came a belt.  His mates got him pretty good.

Now, while I'm more of an eat-the-steak rather than sniff-the-steak guy, that was something I did feel tempted to hand some cash over for.  (I should probably use it as an incentive to get Succubus Summoning 301 written so I can get around to putting the royalties to degenerate purposes! :) )

Despite all this, I'd recommend visiting only when the club is busy.  The girls aren't that pushy, but if the club is quiet enough for them to outnumber the dudes, you will start to feel overwhelmed.

Obviously, there is a lot more to Prague.  It's a beautiful city.  But to be honest, I like trawling the seedier sides (even in this case when they're surprisingly professional) to places and wallowing in a bit of sin.  It helps me create more authentic backdrops to stories.  I did get a decent idea for a novel while I was out there - a succubus-run strip club/brothel in one of the classic old buildings, on the wrong night at the wrong time.  Sort of like Dusk till Dawn, but with a fuck-load more fucking.

Unfortunately, walking around at midnight in near-freezing rain had predictable consequences.  My plan to get home and immediately hit the writing desk was scuppered by the nasty flu bug/virus thing I had the misfortune to bring back with me.  Last couple of days I've been confined to bed and snotting up more slime than The Alien.

Other than that, a pretty good trip to recharge the batteries.  Probably what was needed, to be honest (aside from the flu bug thingy - that can fuck right off).
Posted by M.E. Hydra at 19:21