Coming back from vacation I saw this on Dlsite.com and picked it up out of curiosity. 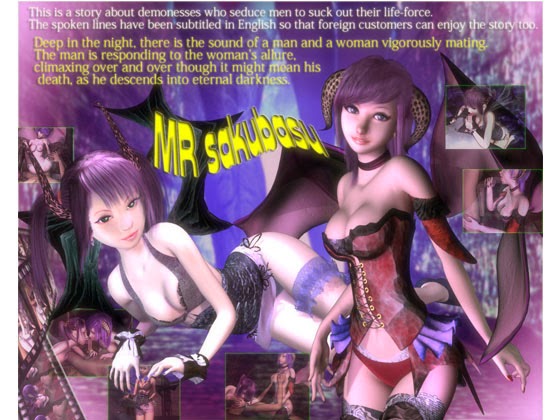 The setting is some kind of fantasy hodge-podge.  There are elves and magic, but the armour worn by the soldiers that appear later looks weird and futuristic.  A professor and his student investigate the ruins of an elvish village revealed after an earthquake and unwittingly release a pair of succubi.  After giving the two men sexy bad ends they head off to the nearest town and start slurping up the local menfolk.  A few squads of soldiers are sent in but don't return.  By this time, either by converting the womenfolk or releasing other succubi from the ruins, the two lead succubi have assembled an army of minion succubi and are searching for the shelter hiding the remaining humans.  Another squad of soldiers is sent in to find out what happened.  Leading them is a half-elf.  Because of his half-elfness he has a lot more magic and life energy.  Basically, this is just an excuse to make him last longer as the two lead succubi spend the last third of the film sexy double-teaming him until they've drained him to blissful oblivion.

A short post, but one of interest to more than a few of you.

Succubus Summoning 208 is now up on Literotica.com:
http://www.literotica.com/s/succubus-summoning-208

When I posted it I realised it had been a shocking 14 months since the last chapter.  For a wannabe pulp-esque writer in the old-fashioned sense that is a big fat fail.  I'll try not to make the gaps so long next time around.