I don't normally buy games full price nowadays.  You rarely lose anything by waiting for them to halve in price in six or twelve months.  I made an exception for Resident Evil: Village.  Partly due to hype, and also partly to recapture that nostalgia of walking into town to pick up the newest game in the series many years ago.  Also, the Lady Dimitrescu character and her vampish daughters appear to have generated a lot of interest, and as someone who specialises in writing sexy femme fatales, it's only natural to look at that and think 'how can I take advantage of this?'

Sadly, Lady D and her three daughters don't appear in the game for too long as their castle is just the first area to explore outside of the main village 'hub'.  While Resident Evil 7 clearly took inspiration from horror films like Texas Chainsaw Massacre and Saw, RE 8 goes back much further to the schlocky old horror films of Hammer and Universal.  You have the usual vamps and woofs (sort of), as well as creepy dolls, fish people and a more industrialised Frankenstein.  Overall, the game is a fun rollercoaster through various classic horror themed areas. 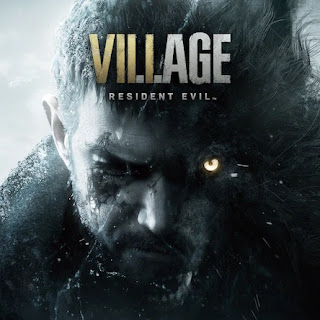 Gameplay-wise, it's a hybrid of the mechanics of RE 4 and RE 7.  At one point I thought it was going to avoid the shooty-shooty action bullshit that blighted the last area of RE 4, and take the crown of best RE as a result.  Sadly, there's a segment near the end that's very bullshitty and drags down the rest of the game.  Still, I enjoyed my time with it.  It's a solid 8.5 and it's good to see the Resident Evil franchise return to relevance after losing its way with 5 and 6.  (If only Silent Hill could do the same, sigh.)

I don't write fan fiction, ever.  Homages and nods are fine.  Taking inspiration and then taking it in a completely different direction is part of the creative process.  Lady D, after all, is another take on Bram Stoker's iconic Count D and his three wives.

While I have to be careful to skirt spoilers, I thought the explanation of what the daughters are is particularly creative.  The core rule of the Resident Evil universe is that everything must have a pseudo-scientific explanation.  Sometimes that is to the series' detriment, other times they can be quite clever within that constraint.  Lady D is a more conventional Resident Evil monster – i.e. damage her enough and she'll start growing extra bits.

It was during Lady D's boss fight I was thinking about what I'd do with that transformation and my own particular philosophy towards blending erotica/porn with horror.  I might play around with that in a future story, as well as writing on that philosophy in more detail.

Talking about it on Patreon did raise an interesting comment from one of my patrons about why I hardly ever write about sexy vamps.  The main problem is succubi tend to beat them out when the creator has greater freedom to be sexually explicit.  They do the same thing, but better.  The vamp approach to death by snu snu is to pause the fucking to fang the victim in the neck.  The succ approach to death by snu snu is more fucking.  Succs win that round.

At least in my eyes, which is a bit limited for readers that would like to see more traditional vamps get in on the sexy action.

Back to Lady D and her lovely daughters.  While they're clearly a nod to Bram's Babes, there is a (unsurprising) bait 'n' switch going on as to whether they're vampires.  In fact, the 'v' word is never used in the game.  Even the game protagonist, Ethan, calls them witches.

If I was going to write a story influenced by them, I'd also be bait 'n' switching the readers with respect to vampires.  (You're going to rule 34 the monster form of Lady D, aren't you, Hydra.  You betcha 😉)  While a certain franchise far, far away has tarnished the concept of 'subverting expectations', it can be a useful story-telling tool, but the creator also has to know when they should just give the reader what they want.

A "Lady D and her three lovely daughters" will make for an interesting story project for this year's Literotica Halloween competition.  If I do that, I think I should also write a conventional vampire story as well, as an apology to the vampire lovers for bait 'n' switching (and probably also traumatising) them.

That leaves me with the problem of trying to figure out how to write a sexy vamp without them automatically being better as a succubus.

It's also something that applies to House of Hellish Harlots.  One of the more commonly requested harlot types is a vampire.

And I think I might have it, for HoHH at least.

I brainstormed some ideas and came up with... uh... a whole clan of vamps.

As for the story ideas.  Can't promise anything.  Reality has an unfortunate habit of fucking up the creative process, and what feel like good ideas at the time don't always reach fruition.  I think it would be a nice project for Literotica's Halloween competition, so... fingers crossed.

The new version of "House of Hellish Harlots" is available for patrons and can be found here:

THE HANDSOME BARMAN
This is the last of the regular House NPCs.  His role is to provide a seamless introduction to the other NPCs.  Later on he will also dispense advice on how to escape the House, but that is to be implemented later.  With his addition that means the basic game framework is now fully written.  The only placeholder material left are the three remaining placeholder harlot scenarios.  There are some optional features I'm thinking of adding later (random events, side quests), but for now the core game framework is fully written.

NEW HARLOT - HIRU NO-KOOCHI
Just the one new harlot, but she does have a big scenario.  I keep saying I shouldn't make the basic scenarios this long, and then do it anyway.  After seeing how popular Suka no-Hirudo was, especially her 'just one more suck' aspect, I created 'evil' Suka using the leech-tongue succubus from my H-space stories.  She's so nice she'll make that difficult 'one more suck' choice for you.

You'll probably get sucked dry by Hiru a lot.  Her scenario is quite difficult.  She's intended as a late round harlot.  Even if you find the right protection, she'll still give you options that will make sure you never leave her room.  On the positive side, she'll make your time in her room very pleasant.

HARLOT MAINTENANCE
Cibi, Suffocatrix Mamilla and Sorpresa Ombra still haven't had their charm interactions implemented.  I was hoping to get that done, but it got crunched out when Hiru's scenario ended up being bigger and slower to implement than I was expecting.  I will try to get that done for the next release as well as fix some minor corner case bugs I know exist.

April ended up being a bit of an off month.  I was probably due one to be fair.  That's why there's only one new harlot.  Her scenario is one of the longer ones I've written, so I hope that makes up for it.

This means the proper public demo is going to be pushed back a month.  While the basic game framework is now fully written, there are still 3 placeholder harlots I want to replace.

I know some of you would like to support this, but really don't want to give money to Patreon, and I understand that.  When I put the proper demo out, I'll look at additional funding options.  What I'd like to do is ramp the project up to include decent artwork.  The game will primarily remain text, but Monster Girl Encyclopedia type pictures of the harlots would add a lot to a playing experience.

For now it's just about continually adding new content and growing interest.