New Short Story - "The Banquet of the Queen of the Goblins"

Finally finished that damn carnivorous plant girl story.  Not sure why the 2nd draft took as long as it did, but it did.

Might as well get the bad news out of the way first.  Yes, it is pay-walled behind my Patreon account.  Sorry, regular readers who don't have access to that.  As with the previous boobie girl story, it will find its way into an ebook collection at some point in the future.

The monster girl was inspired by the carnivorous plant girl from Domination Quest: Kuro and the Naughty Monster Girls. 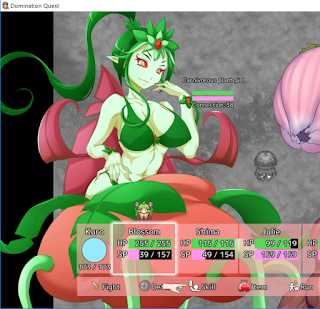 I did my usual thing when I dip into vore-ish areas to make the monster girl more interested in the sex part rather than the "git in my belly" part, so in that respect she deviates quite a lot from the initial inspiration.

It's another H-space story, although it's more in keeping with my older H-space stories rather than the Stewart Peter Bate stories I experimented with for a while.  At 8,200 words, it is much more like the older stories!

And now onto the more controversial stuff.

This is Patreon pay-walled again, are you ever going to go back to putting stuff up on Literotica for everyone to read?

Right, the problem here is that I'm still chugging along in low gear when it comes to writing.  As much as I don't like or trust the people behind Patreon, it currently is a useful source of income to keep my finances ticking over.  I'm of an old-school mindset when it comes to entertainment.  If people are giving you money, you need to give them something back to make them think it was worth giving you that money.  In this case it's timed exclusives (and some options to name protagonists, etc).

When I set it up, my initial aim was to give patrons something exclusive at least once a month and then anything I produced extra could then go up on Literotica (or here if Literotica found it a little too icky).  As I mentioned earlier, I'm currently stuck in low gear when it comes to productivity.  So far this year I've finished 2 short stories (16K words) and a demo opening section for a possible CYOA game (5K words).  This is obviously not ideal.  The only positive is that I am still chugging along to some extent.

So, yep, sorry to the readers that can't get on Patreon (or are unwilling to give them money).  I will try and get something done for you at some point.  As for those that can, enjoy... uh... being erotically consumed as my lovely new carnivorous plant girl puts it.

(I'm not entirely sure she's being trustworthy, but her last prey seemed to enjoy himself...)