Public demo of "The House of Hellish Harlots" is now live!

I said I was going to put it up on a website somewhere and finally, it's here.

As will be apparent, my web-fu lags a long way behind my writing ability, so the current website is very minimalistic.  It has a 'play' button and you can play the game demo in the browser, so it represents a start.  Now I have something in place, I can add to it later.  For now, I felt my limited web skills would make something awful if I tried to be clever, and so went for basic functionality.

If you like it, please spread the word.  If you're an artist and inspired to make sexy art of these characters, please get in touch.  Good art is something this project desperately lacks.

I put a non-paywalled version out so I can gauge interest and hopefully raise funding for artwork.  If you'd like to help support, I have my Patreon.  If you'd like to help support but would rather gouge your own eyeballs out than give money to Patreon (understandable), any suggestions for alternate funding approaches are welcome.  I'll probably add them as a sidebar to the website at a later date.

"The House of Hellish Harlots" is currently a text-only game made in Twine.  I think it has the potential to be a decent Western eroge.  It's a bit bland and text-only now, but every project has to start from somewhere.

And now we have a proper public demo.

I've always had a weird relationship with 62studio games.  I pick them up, bounce off them early, then come back and realise they weren't all that bad after all.  Lust Grimm was the first.  Sadly, I played that through at a time when I was concerned I was devoting too much time to writing blog posts over things that pay the bills, so I never wrote a review of it.  It's pretty good. 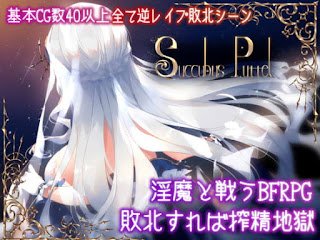 Succubus Puttel is more of the same.  I think it's 62studios's 3rd full game.  It's a fairly standard RPGmaker battlefuck game.  It's another game featuring a young man protagonist in a fairy-tale world filled with cum-hungry succubi eager to jump his bones.

The game starts out with everyone being abducted from the starting village by succubi.  The hero sets out to rescue his 'sister' while being given 'help' from a pair of talking chickens.  It's not as it seems, as is revealed through the quest.  The quest itself is fairly straightforward.  Go to different areas, beat the deadly-sin-themed succubus boss of the area and then have a showdown in the final castle.  There are also a few optional quest items to pick up, and these will determine the ending.  Thankfully, they're not too guide-dang-it, mainly because I was playing an English translation and also because the NPCs aren't too overly cryptic in their instructions.

One warning.  I found my version to be a little crash-happy.  I don't know if this is a problem with the original game or the modded translation.  Either way, save regularly and often (you don't need to do it at the designated save chickens).

The combat is reciprocal battle-fuck, i.e. both combatants are trying their best to get the other off rather than games like MGQ where the protagonist is trying to fend off the lascivious succubi's advances with regular weapons.  Unlike MGQ, it isn't game over if the succubus makes you pop.  The game generously gives you 3 pops before you become unresisting succubus fodder.  Although, as the succubus gets stronger each time she makes you pop, having two more 'lives' doesn't always help.

Attacks are split into two categories – mouth and hand – and target four different erogenous zones – mouth, tits, pussy, ass.  Each succubus has a weakness to be targeted for bonus damage.  Remove half of the succubus's HP and she'll take her clothes off.  Remove a little more and she'll try to tempt the player.  Accept the temptations and she'll do a special sexy move on you that will force an ejaculation and drain a level out of the player.  This works pretty well with the 3 'lives' system as it overcomes the central problem of most battlefucks in that the player has to lose to see the good stuff.

Personally, I'm iffy on 'press X to surrender' mechanics.  One thing I liked about Lust Grimm was some of the succubi had special level-drain moves they'd drop on the player during regular combat.  Gameplay-wise, constantly getting your levels drained might be frustrating, so I can see why they made it something the player has to choose to happen to them, but I think Lust Grimm balanced it fairly well with levelling up being cheap enough that replacing lost levels wasn't much of a grind.

The special holds are also very exploitable.  The player can learn various protective skills that reduce damage from specific areas (eg breasts or pussy) to about a tenth.  Normally, they're not too helpful, as you don't know what the succubus is going to 'attack' with, but once a succubus has you in a special hold, all subsequent attacks will be of the same type.  This means that rather than trying to break out, it's better to stay in the hold and alternate between 'Resist: X' and 'Attack: Weak Point' until the succubus comes.  There is one succubus that counters this – Boobs Yokai/Busty Phantom (one of my favs for the series).  If the player doesn't break out of her hold after a certain number of rounds, they pass out and lose no matter how many 'lives' they have left.  I would have liked to see more enemies do things like this to give more variety to the sex battles.  Once the player has figured out the holds are exploitable with the mid-level succubi, that would be a good time to spring the involuntary level-drain attacks on them from the high-level succubi if the player doesn't break out of their holds fast enough.  I think the game missed an opportunity there.

Overall, the battlefuck combat is fine without being amazing.

The art is pretty good in my opinion, although there is no animation.  You get the standard battle-sprite, naked battle-sprite and Bad End pic array of CGs.  I like the style of the main artist and it gives 62studios's games a consistent look.  The other artists are a little more variable, but overall it's pretty good.

The one caveat is that the devs unashamedly love big boobs.  While the Bad Ends cover a range of sex acts, boobs get the biggest share with titwanks, puff-puffs, breast-feeding and nursing handjobs galore.  There's one token flatty and everyone else has cup-sizes ranging from silicone-enhanced centrefold model to utterly gargantuan.  YMMV on which point it passes beyond attractive to grotesque.

If you like boobs and believe there's no such thing as 'too big', these are the succubi for you.

Overall, I liked it.  Compared to similar games, it falls somewhere in the middle of the pack.  The art is fine and the gameplay is fine.  There were enough succubi designs that hit the right spot for me (smother me, busty phantom).  Story, art and gameplay are all competently executed, but maybe needs an extra spark in something to truly excel.

The new version of "House of Hellish Harlots" is available for patrons and can be found here:

It's a couple of days late, but it's finally here.  Sammy's scenario took a little more testing than a normal scenario.

This is almost a milestone release.  This replaces the last of the placeholder 'dummy' harlots.  Everything is fleshed out.  This is pretty much the first 4-6(ish) rounds of the game with everything in place (with the main exception being the harlots aren't organised and tiered - you shouldn't have to choose Sorpresa or Hiru in round 1!).  There are 31 harlots in total.  All with full scenarios.

Almost, as there are still a few minor bugs I need to fix.  Mostly corner cases that shouldn't come up very often.

Acarina.
She might be familiar to readers of my stories.  She showed up in the "Vampiric Boobies" short story.  She gives a lovely paizuri that will really drain the player.  And also regular sex.

Sammy
Sammy is a little special.  She's similar to Panta Prota in that a lot of different variables affect how she responds to the player.  She's one worth playing around with to try and figure out her turn ons.  (She was also a pain to implement and test - I think I covered nearly every variation, but if I missed any and you get ugly fail code or typos, let me know.)

Khanara Anandanum
Another unusual harlot.  Not a lamia, slug, or slime, but with properties of all three.  She'll wrap you up and drown you in pure bliss.

Yes, I probably have too many charms in already, but I added a couple of new ones.  One is something that should have been in before - an anti-sleep charm (or maybe anti-sheep charm).  The other has an interaction with one of the new harlots.

I finally caught up with the last outstanding harlots.  Both Sorpresa and Suffocatrix Mamilla now interact with the charm you think they should interact with.  Cibi is also updated and interacts with a new charm that offers some but not full protection from falling asleep.

All of the old harlots are now updated, so if you think a charm should protect against a harlot (or interact with) and doesn't let me know.  The reason it doesn't is for game balance reasons, but if it looks illogical, and lots of people point it out as illogical, I'll need to at least reference why it doesn't work.

And that's it.  I overran a little this month, which was unfortunate.  I do have a head start on the next batch of harlots, and also less restrictions on what can be included.  Hopefully, I'll get back to regular releases at the end of the month, rather than a couple of days into the next month.

This is pretty much the version I want to use for the 1st public demo.  Virtually everything is in place and I've replaced all the 'dummy' harlots. Next week I'll be looking into getting a website set up and seeing if I can get House of Hellish Harlots to run in-browser.

My web dev skills are very rudimentary at best and I don't have any artwork, so don't expect anything earth-shattering.  I'll be happy if I can set up something similar to how the old demos ran on philome.la!