This was originally intended to be for Literotica's Halloween contest, but I tried to finish two stories before the deadline and predictably failed to finish both.

Currently it's patron-only, but I've just submitted it to Literotica and it should appear there in 3-4 days (assuming it doesn't get rejected - this one is a little nasty).

The inspiration was a viral video I saw floating around on social media.  I turned it into a little succubus horror tale for Halloween.

As I feared might happen, Literotica rejected it for being a little too horrifying.  Probably a good thing I didn't finish this one in time for the competition!  Sometimes I can chase up on these things and get the decision reversed, but I think I'll leave this one as a temporary patron-exclusive until I find a home for it in a collection. 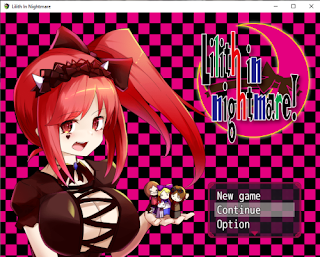 The game is Lilith in Nightmare.  It's produced by Circle Tekua.  They've made a few succubus and monster girl eroges.  The big update they made to this game was to animate the H-scenes, and they are very nice indeed, I've got to say.

The game is a standard RPG-maker battlefucker.  You play as either Riddle or Alice (a futa) and start in a dreamworld with your memory missing.  The first character you run into is Lilith, who gives you the traditional succubus greeting.  After being drained by her tits, you're rescued by Charlotte, a friendly catgirl succubus.  And then the story begins.

The story is rather sweet.  At first it looks like the goal is simply to help Riddle find his memories and escape, and then through flashbacks we learn why he is here and that his connection to some of the NPCs is more than coincidental.  There are two endings, but they're arranged in such a way to make me think the game was initially released with the first one, and the second was added later when they had more time to finish it.
There are a good range of characters and they're pretty much all fun.  The main antagonist, Lilith, is an energetic airhead who just wants to play with the main character.  There are a pair of bratty succubus twins and a couple of darker succubus types as well (which I of course loved).  The named characters also keep coming back, which allows the player to get to know them more.

The gameplay is probably the weakest point.  It's your standard battlefuck RPG fights.  Examine to find the most sensitive body part and then concentrate on that until they start coming.  The bosses all have special moves that can be OHKOs if they land, with the player having to make an agility check to avoid them.  While this might seem a little RNGy, the player has a special move to temporarily double agility, which is usually enough to avoid getting hit.

The game has regular enemies, but they're dealt with by shooting them on main map.  They're a tolerable irritation and this is a much better way of including them than bogging down the gameplay with needless non-H fights.

The levels are surprisingly varied in mechanics.  There are a couple where the main character is kidnapped and the support characters have to race through the level to get to them in time before they get fully drained by a succubus.  Another sees the character have to dodge bullets being shot by a sniper succubus.  It's a refreshing change from the usual gameplay of running from point A to point B and fighting a bunch of random encounters along the way.  There's also always the option to go back and replay them, which is a good addition.

Overall, a very nice game.  Definitely worth a look for fans of succubus and monster girl smut.

As I said in the last post, the new short story, "The Succubus in Mr Herbert's Summer House" has been entered into Literotica's Halloween contest.  The contest has begun and the story is now live.  You can read it here:

The Succubus in the Summer House

Two local toughs in a seaside town are given a job by a grizzled old mobster.  They must 'babysit' Mr Herbert's summer house for the night, and the mysterious woman tied-up on a bed inside...

(I had to truncate the original title as Literotica story titles have a character limit.)

Quick note on Literotica contests.  Because of the way the scoring works, voting lower than a 5 for anything is actually worse than not voting at all.  Also, don't do anything silly like downvote other stories to help mine.  While there is a prize, the contests are a bit of fun and not to be taken seriously.  I doubt this one will be a contender anyway because of the nature of the story. ;)

Also, yes, I'm aware of the formatting problem with the sentences in italics.  There shouldn't be two extra lines of white space after the sentences.  I'm guessing it's because the closing italics tag was put on the next line and Literotica formatted it oddly.  So, sorry about that.

Anyway, I hope you enjoy it.

I don't think this particular story is finished just yet...