Time for some more booky-wooky stuff (Just in case the midweek rant explosion hasn't already drove everyone away - I'll try and make it up by getting back to some good ole-fashioned succubus smut next weekend).  This is my #52Books (let's be realistic - #30Books) project caught up to May. 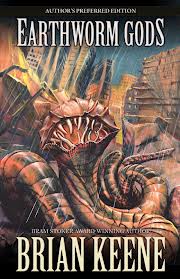 My favourite book of the year so far.  Then I am a sucker for old-fashioned monster stories and Earthworm Gods is a big brash monster story with the possible end of the world (Again, Mr Keene?  How many Earths is that now?) as a backdrop.  It’s been raining constantly for the past forty days, the world is flooding and monstrous worms are coming to the surface to pick off survivors.  What’s not to love?

The book is broken into three sections.  The first concerns Teddy, an old man living up in the mountains, and sets the scene with first the unnatural rain and then racks up the tension as the predatory worms appear.  Teddy is joined by some survivors and the second part is their account of escaping a drowned city haunted by other monstrous threats.  The third part returns to Teddy’s house and an epic stand against a threat even worse than the eponymous killers worms.

I really enjoyed this.  Teddy is based on Keene’s grandfather and is an interesting and well-drawn protagonist.  With some of Keene’s other books I felt the focus drifted near the end, but here he’s on brilliant form, with some superbly executed set pieces.

Stuff ‘realistic’ horror with serial killers and other dullness.  Nothing beats some good old-fashioned monster scares. 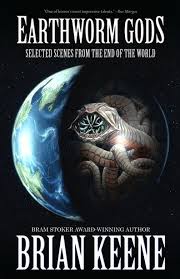 #10: Brian Keene – Earthworm Gods: Selected Scenes from the End of the World

This is a collection of short stories set in the same universe as Earthworm Gods.  The characters are all real people who paid for the privilege of Keene writing them into a story and killing them off in imaginative ways (an interesting concept—anyone fancy being made into succubus fodder?)

It does impose some restrictions on the stories—Keene shows no qualms in sending his sponsors down the maws of various hungry worms, but is obviously not going to depict any of the characters in too bad of a light.  After reading the first few stories I had some doubts.  They’re a little too short and follow a similar pattern of potted character history, setup, and then the fade out as the character meets an untimely end.  However, the collection does settle into a kind of rhythm and while the stories are short, in accumulation they do a good job of describing the doomed, drowning world.  Overall I enjoyed the collection, but wished the stories weren’t quite as short as they were. Yahtzee Croshaw is probably more familiar as that dude who speaks really fast on the Zero Punctuation videos.  Aside from reviewing games and creating point-and-click adventure games he also writes books.  Jam is his second.

This is the point where I could rant about useless legacy publishing is and how the only way someone born after the mid-seventies can get a horror book out is through spending a decade becoming famous at something else first, but that would feel like leaping onto a mammoth to attack it with a chainsaw when the mammoth is already sinking beneath the surface of a tar pit.

I picked this up because of the interesting premise—An apocalypse (or jampocalypse) where Brisbane gets buried beneath three feet of carnivorous jam.  The ‘jam’ is a voracious blob-like monster that absorbs all organic matter on contact.  The narrator sees his flatmate get slurped up on page two and the book maintains the same pace throughout.

The book is a parody and leans more towards Bizarro than outright horror (You might have already guessed this from the whole ‘carnivorous jam’ thing).  It follows the British comic tradition of characters trying their best, but getting distracted by trifling concerns (such as the narrator’s insistence in carrying around a Goliath birdeater spider) and continually undermining their efforts with sheer incompetence.  Think Shaun of the Dead or Red Dwarf.  Croshaw’s Jam isn’t quite as sharp as those, but it’s a fun read that might make a decent TV mini-serial (6 episodes, obviously).

It’s time to get all classical with one of the most famous depictions of hell—Dante’s Inferno.  I picked this one up from the Gutenberg project, although I thought it contained all three parts of the Divine Comedy (Inferno, Purgatorio, Paradiso) rather than just Inferno.  It did, however, contain copious notes for which I’m grateful as following classics without the historical context is really hard.

I knew about the structure of hell as Dante created it—the nine circles each punishing different sins—but this is the first time I’d read the source (okay translation of the source).  It’s pretty much Dante dissing everyone he’d ever disliked and imagining various scabrous torments to be inflicted on them in hell.  Drown in rivers of boiling blood!  Be submerged in pitch while demons stick forks in you!  Great fun.