September seems to have a bookish theme on the blog.  Don't worry, I don't believe in boring books - I like mine filled with sex and violence... ;) 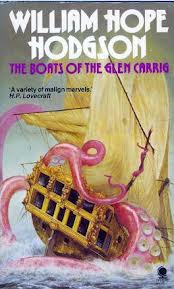 #17: William Hope Hodgson – The Boats of the ‘Glen Carrig’

This is a real oldie, being first published in 1907.  You can pick it up for free from the Gutenberg Project here.  Most people associate weird tentacle horror with HP Lovecraft, but Hodgson predates him.  This is a weird horror tale concerning the adventures of a group of seamen after their boat sinks and their lifeboats encounter strange islands and an eerie weed continent.  The book was written over a century ago and the prose features a lot of quirks.  For starters there are no dialogue tags.  The entire book is written as an account of the narrator’s adventures.  Despite this I didn’t have any problems with the pacing and found it an enjoyable, if old-fashioned, yarn.

If you’ve devoured all of Lovecraft’s works and fancy something in the same vein, The Boats of the ‘Glen Carrig’ might be worth a look.  Hodgson has a similar flair for weird horror.  The weakness he has compared to Lovecraft is there is no over-arching mythos underpinning the work and it lacks the cosmic bleakness of Lovecraft’s stories—it’s more of a romantic adventure in a very odd setting.  The story is effectively eerie and creepy in places and worth reading for fans of old weird horror. 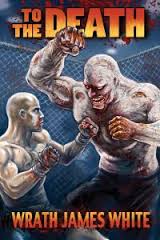 Zombies meet MMA cage fighting in a satisfyingly brutal book from Wrath James White.  The default setting for the ever-popular brain munchers is zombie apocalypse, so it’s refreshing to read a book where the apocalypse sort of fizzles out and never materialises (there’s a minor subplot where an African warlord uses them as an army and fails).  The real focus of White’s book is to put an MMA fighter in a cage with a zombie and describe the messy results in graphic detail.  Being a former fighter himself allows White to bring a degree of verisimilitude to the brutal and pulpy fights.

And it is a pulp story—there are evil mob bosses, cops and a hard-up fighter trying to win his last lucrative fight and get out with the money before the authorities shut everything down.  Tyler Pope is the fighter, and waiting for him in the cage is the monstrous Lester Broad (I’m guessing an expy of the real-life Brock Lesner), a recently-deceased former professional wrestler, former MMA champion, and now returned as a hulking, two-hundred-and-eighty-pound, ravenous-for-human-flesh zombie.

The editing is a little sloppy, but thankfully this doesn’t detract too much as White’s entertaining slice of gore-noir zips along at breakneck pace.  I thought White might have missed a trick with the ending though.  One of the characters would have made a good foil to his recurring main villain, Vlad, in future books, but alas, a round two is not to be. 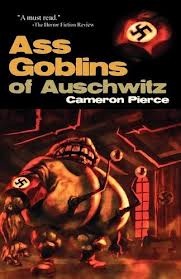 My experience of Bizarro fiction thus far appears to be this:

This book was not written by Carlton Mellick III.

Pierce’s sophomore effort is a tricky book to write about.  It’s set in a suitably bizarro universe where nazi-themed ass goblins (asses on legs with eye stalks emerging out of the butt cheeks) abduct kids from Kidland and take them to Auschwitz to make toys out of children’s body parts.  Pierce has a fantastically loopy imagination and a flair for describing the gross and perverse.

The book didn’t really hit the spot for me.  Pierce is going hell-for-leather for total offensiveness and gross-out description, which is great to see, but the characters were too detached from reality for me to really care about the varied and highly imaginative indignities Pierce heaps upon them. 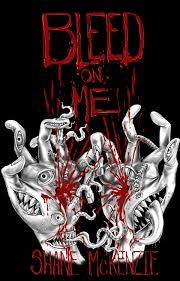 Fasten the seatbelts, this one is high-octane gore fuel.  Deadbeat slacker, Chris Taylor, goes down to complain about the noise his gangbanger neighbours are making and finds himself in the middle of a massacre.  The new drug they stole and tried out has the unfortunate side effect of opening up the body to demon possession.  And by possession I mean rip the body apart and reshape it in new and imaginative forms of body horror.

The book is short, fast and completely drenched in gore.  There’s barely a chance to pause for breath as Chris is pursued by twisted demons.  It would make a great action-packed horror film.  There are some weaknesses—McKenzie could have filled in some more of the background, in particular why a character’s blood does what it does—but overall the book is fun, fast-paced and perfect for gore lovers.
Posted by M.E. Hydra at 16:10