A Succubus Team for Fantasy Football

By Fantasy Football I'm referring to the trope of fantasy races playing some form of hyper-violent sportsball (usually a derivative of American Football) rather than Fantasy Football in the mainstream sense.  For tabletop miniatures games, this usually equates to Games Workshop's Blood Bowl, although there are other games.

Blood Bowl was a tabletop game I enjoyed a lot when I was younger and since returning to the UK I've been using it as the basis of some beer and gaming nights at my brother's.  Blood Bowl as a game is in a weird state as it's still popular, has its own playing community, but has been effectively disowned by the games company that created it and is no longer supported.  If you want to pick up the minis nowadays you have to get them second-hand off Ebay.

The official ones anyway.

Other miniatures manufacturers create fantasy football minis.  They're not official Blood Bowl minis and they don't have the (presumably trade-marked) Warhammer names, but if you're looking for a Skaven team, you'll be able to find someone making a ratmen team that just so happens to have all the official Blood Bowl roster positionals covered.  Indeed, for some teams (i.e. Slann) this is the only way to get a team.  The rules for them exist, but GW never produced a line of miniatures to represent them.

While looking for alternate team minis I came upon this site offering a Succubus team that I thought looked a little interesting.

Here are a couple of the minis as an example. 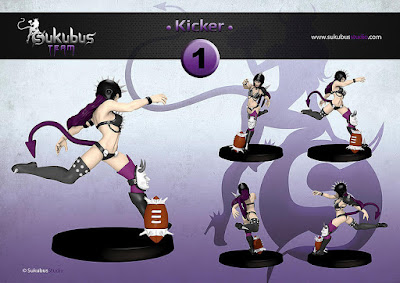 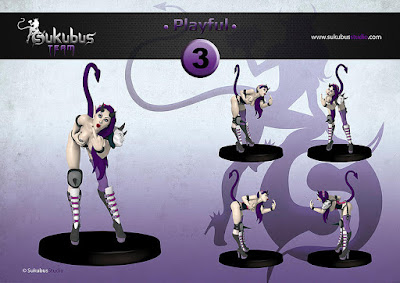 I'm guessing most of these ranges are put together as fantasy-football-themed minis for people to collect and paint.  The savvier studios will also make the range correspond to one of the official Blood Bowl rosters so players can also use them as game pieces for the tabletop game.  The Amazon team roster, being the only all-female team, tends to attract a lot of alternates.  In GW's official Warhammer/Blood Bowl fluff Amazons have an Aztec flavour.  Unofficial interpretations tend to head off into more risque territory and I've seen Naughty Nuns, Bunny Girls and even a full bondage team.  (I'm guessing turning up to tournaments with that as your team is frowned upon :D )

Hmm.  Maybe it might be fun to put some rules together for this team.  Thoughts?  Any keen Blood Bowl players out there?
Posted by M.E. Hydra at 11:00