One of the most important pieces of advice they give to writers is to read lots. This was something I used to do. In my teens and early twenties I was a voracious devourer of books. Then I fell out of the habit. Juggling a full-time job with writing and other hobbies doesn’t leave a lot of time left over. Plus, I tend to think time spent reading is time I should be spending writing, especially when self-imposed deadlines start looming. Sometimes it’s good to eat a few books to blast the cobwebs away though. This is what I’ve munched through on my kindle lately:

Christopher Fowler – Hell Train
One of my favourite horror writers from back when I used to read more voraciously. This is an enjoyable romp featuring Brits abroad being ghastly and clueless, and meeting imaginative and bloody ends on a train bound for Hell. Well, sort of. It’s a story within a story of a writer pitching a script to Hammer at a time when the studio was falling out of favour (They’re better now). Part of the fun is trying to guess which famous Hammer actor Fowler has in mind for each character.

Carlton Mellick III – The Morbidly Obese Ninja
I’ve been meaning to check out the Bizarro (sub-?)genre for a while. Mellick is the granddaddy when it comes to fucked-up weirdness. This is a manga-esque tale of a 700-pound corporate ninja. Short, but it zips along and Mellick does a great job of providing a rational underpinning to his very weird world.

J.F. Gonzalez and Mark Williams – Clickers
Entertaining pulp horror. Crab things with scorpion tails and venom that makes limbs burst like overripe bananas emerge from the sea and threaten a New England town. Ultimately, the clickers are fairly dumb critters and it’s easy enough for the (well-armed) townsfolk to keep them under control once the initial surprise has worn off. The things that follow the clickers out of the sea, not so much…

Brian Keene – Kill Whitey
A dock worker rescues a stripper from a seemingly unkillable Russian mob boss. A fast-paced page-turner that reminded me of the early Koontz thrillers-with-a-supernatural-twist I used to enjoy reading.

Cameron Pierce – Gargoyle Girls of Spider Island
Another Bizarro piece and…um…yeah. A group of teens borrow a yacht, get attacked by pirates and end up on an island where the girls look like centrefolds by day and turn into rapacious, raping, vagina monsters by night. It’s short and starts right in the action, but I’m not sure what to make of it. Part of me thought it was too silly, with characters more suited to a cartoon, and another part of me thought it was fucking hilarious. Probably best to think of it as a horror comedy—like an XXX version of one of Peter Jackson’s early splatter movies—to fully appreciate it. I suspect Bizarro might be beyond the comprehension of my simple little brain.

Curse you, Cameron Pierce! You made me feel old. 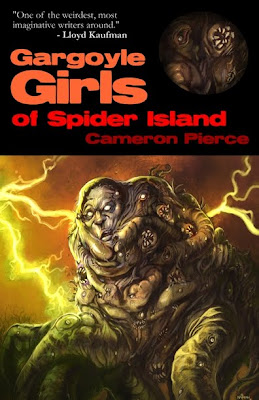 This gets a sex scene. It's the woman.
Edward Lee – The House
Lee is the master of hardcore fucked-up gross-out porno-horror. This is two novellas, “The Pig” and “The House”, in one. “The Pig” is the better of the two, a disgusting yet blackly hilarious tale of a luckless filmmaker falling foul of the mob and forced into making “speciality” porno’s. Nearly every taboo is gleefully transgressed in some style and the ending is satisfying.

“The House” isn’t quite as strong. While it also has moments of memorable grossness (Shake-a-Puddin’, blergh), Lee never escapes the straitjacket of Haunted House conventions.

Ah, that was good to blast out some cobwebs. If anyone has any similar suggestions for things to read, feel free to pop them in the comments.