And the final score is:

It’s even worse when I think of all the words of stupid clickbait articles from newspapers like The Guardian I read instead.  Sigh.

I’m not disheartened as the aim was to read more books and the kindle (and Amazon) has been brilliant for this.  I’ll go for it again next year but I won’t bother with the blog posts and reviews.  They don’t get a lot of hits in relation to the other posts.  As I’m aiming to improve my writing productivity it’s better for me to spend my time writing 1,000 words on the latest story/chapter than scratching around on a two paragraph review of a fifty-year-old book.  I might throw up the occasional round-up, but they won’t be as detailed.

With that out of the way, here’s the last of the books I read in 2013.  Overall my favourite was Brian Keene’s Earthworm Gods and I also really enjoyed Shane McKenzie’s novellas.

Another slice of fun’n’gruesome from McKenzie.  When I read the synopsis I wondered if this might be McKenzie’s version of a succubus story.  It’s not, although the feedlings are inventive and interesting demons.  As the title states, they feed off sex and violence and are very adept at causing both.

The protagonist, Gary, is indeed a real fucking loser—the start of the book has him caught masturbating in the toilet of the comic store he works.  He’s every negative geek/nerd/gamer/comic fan stereotype wrapped up in a soft, blubbery human shell.  It works because most people will know a Gary or three, or even been one themselves at some point.  It’s easy to feel pity for him for the first half of the book, but there are also plenty of hints that a lot of his problems are self inflicted or at least made a lot worse through his weakness of character (I liked the scene where a young fanboy gives him money so they can both have lunch and Gary unthinkingly orders a burger so expensive there isn’t enough money left for the other boy – sums the character up perfectly in a couple of lines).

The inevitable demon-fuelled roaring rampage of revenge, when it arrives, is satisfying (and gory!), even though you know it’s going to go horribly wrong for poor Gary (which it does).

Another short novella from Brian Keene packaged with some additional short stories.  It’s a good concept and gives the story a lot of pace as you want to read on to see what the not-quite-so-randomly-psychopathic antagonist is up to.  Unfortunately the ending is a little anti-climatic as the protagonists don’t really protag all that much.  Maybe Keene will come back to this one day and round it out with additional novellas in a similar way to what he did (to brilliant effect) with Earthworm Gods.  Disappointingly, the kickstarter to make this into a movie fell through.

After the other high-octane offerings from Sinister Grin Press, this was a little bit of a surprise—a slower, multi-viewpoint tale of ghosts haunting a small town in the aftermath of a serial-killing atrocity.  Solid overall, but unspectacular.

#28:  Joyce Carol Oates – The Corn Maiden and other Nightmares

First time reading Oates.  Wow, the prose is good.  I wish I could write like this.  It’s not all style over substance either as, a few iffy endings aside, the stories are mostly solid.  The title story is the classic small town meltdown over a missing child and ends with some interesting questions as to who pulled whose strings.  It’s a shame the horrors are all of the mundane (non-supernatural, non-weird) kind, but I think I’ll pick up some more collections of hers for the prose alone.

The follow-up to The Land That Time Forgot is a bit too light on the dinosaurs and too heavy on the overly-simplistic politics between the various cavemen tribes.  An okay adventure story, but misses the tension the uneasy alliance with the Germans provided in the first book. 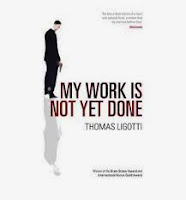 My first exposure to Ligotti, another name spoken highly of in horror circles.  For the first half of the book I was wondering if the blurb had been telling porkies as it looked like a simple revenge tale about a “good” man getting the shaft in a corporate environment and then going off the rails.  Then the supernatural elements kicked in and were followed by some highly imaginative and (mostly) deserved deaths.  The revenge fantasy is also cleverly subverted—karma is not in play here and the whole story is riddled through with cosmic darkness.

A solid collection of horror tales from the other horror writer from Maine.  Yes, it’s predictable in places, but I’ll take that every day of the week over a lot of the plotless, style-over-substance nonsense that abounds nowadays.
Posted by M.E. Hydra at 03:38 No comments: