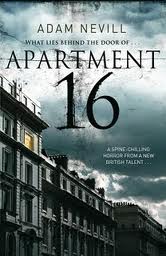 This fella appears to be picking up a bit of buzz recently.  His most recent book, The Ritual, was one of the winners at this year’s British Fantasy Society awards and this one was nominated last year.  He’s also the first new horror (proper horror, not sparkly vamp’n’woof romance) writer I’ve seen appear in the horror section of my local Waterstones in what seems like forever.  He’s also good.  Apartment 16 is a cracker of a book.  A modern ghost story might be a close enough description, but Nevill never allows the book to get bogged down and doesn’t shirk from describing graphic and disturbing imagery.

The plot follows the converging paths of two characters.  Apryl is a young woman over from the States to claim an inheritance from a previously unknown great aunt.  While going through her aunt’s belonging she uncovers a disturbing history to the ancient apartment complex her aunt lived in.  Seth is a failed artist working as the night-shift guard at the same building and slowly falling under the influence of the evil that permeates the building.  Don’t be put off if that sounds uninspiring.  Nevill’s vivid descriptions and concept of an afterlife as black and as cold as a distant dead star elevates what could have been a humdrum, staid idea into a highly effective chiller.  Definitely one for when the nights grow longer and colder.  I’ll definitely be adding more of Mr Nevill’s books to my reading list.