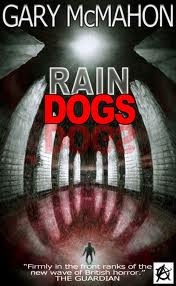 Here's one of the books that was recommended to me when I asked for good contemporary British horror.  It was a runner-up in the British Fantasy Awards in 2009.

Hmm . . . yeah.  It’s definitely a book of two halves.  The first half is dull, dreary rubbish and there were a number of times where I was tempted to throw the book aside and move onto something else.  There’s a working-class family man returning home after a stint in prison for killing a burglar and a woman in an abusive marriage who’s able to see ghosts, but it’s all mired in the rut of miserable characters living miserable lives British horror really needs to break out of.

Thankfully the story comes back from its half-time oranges with a lot more vim and vigour.  The eponymous Rain Dogs are an imaginative concept, the pervasive rain evokes a strong atmosphere and the pieces do come together in a decent—and thankfully coherent!—climax.

It’s hard to know where to rate this one.  There’s an interesting horror story here; it’s a shame getting through the first half is such a boring slog.
Posted by M.E. Hydra at 00:57 2 comments: