Still on the topic of violent video games, here’s a classic from the prehistoric days of lumbering arcade machines. 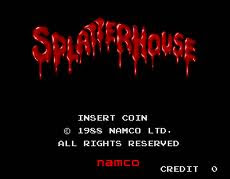 There was a Splatterhouse arcade machine at my local ice rink and I remember spending a few Saturdays in my youth feeding it 10p and 20p coins. The graphics were totally wacko and disturbed compared to other games at the time. There was a boss with chainsaws for arms, crawling baby things with oversize heads and many vomiting alien monsters/torture victims. The first boss section had waves and waves of bloody worms springing out at you from all angles in a room piled high with red meat. It was sick, it was gruesome and it was fun. There was a satisfying ‘Thwack!’ to splattering enemies up against the back wall with a meaty swing of a pipe.

It was also fiendishly difficult. Back then most arcade games followed a simple formula—a fairly pedestrian stage one, followed by a harder-but-still-possible stage two, and then ramping up into a black hole of difficulty designed to suck all the small change out of your pocket. Mr Chainsawman did for me on many an occasion, although I did see the occasional player stumble past him only to fall at the floating cross and severed ghoul heads at the end of stage four.

A few years back I managed to find a version to run on my PC with MAME (a fantastic program for nostalgia gaming geeks). With infinite simulated 10p coins I would have my revenge, bwahahahaha…

Just about. By level six and an organic corridor full of wibbly embryo monster-things jumping on your back at every opportunity, the game developers are telling you to ‘sod off!’ in no uncertain terms. If it wasn’t for some gratuitous save state scumming (yeah, because even infinite coins isn't enough...) I’m not even sure I’d have completed it at all.

It’s a game I have many fond memories of. It was the first arcade game I remember to really go for it when it came to gross horror visuals. There’s a recent remake I’ve been meaning to check out, even though I’m sure it won’t have that same…you know…Thwack!

I never could pull off that damn sliding kick…
Posted by M.E. Hydra at 02:08