Don't Judge a Game by the Cover: Catherine

A little tale. I was in my local video games store. They’re a small store, so they tend to only stock the latest AAA titles. I was surprised to see Catherine sitting on the shelf. Catherine is an odd little Japanese game made by Atlus, the same people that did the Persona series. I’d been interested in picking it up, but had resigned myself to having to order it through Amazon or someone like that as my local games shop is useless and only stocks the latest slick-but-empty titles from Activision/EA.

I mentioned my surprise to the girl behind the counter.

“Oh, that one’s been popular. There are not many games for girls.”

Feeling my manliness being called into question, I of course responded with:

Doubtful glance from girl behind counter.

“A pair of girls bought a copy yesterday.”

“I’m pretty sure it’s a horror game,” I said rather feebly as I handed over my money.

I don’t think she believed me. 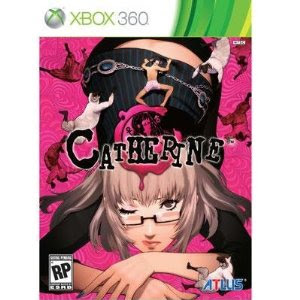 But the game is actually this:

The uh-thing is firing pink hearts out of its mouth. I guess that’s girly. Right?

Despite the titillating nature of the promotional material, another reviewer summed it up correctly by describing it as an adult game without being an “adult” game. This isn’t Monster Girl Quest. It is, however, completely bonkers and a lot of fun. Well worth checking out. I'm also glad to see it's sold a lot as well, this bodes well for a future where oddball games can exist.

And Catherine, the character, is completely adorable, even if she is a [Spoilers!]

(Oh, and I know the concept of girl’s games and boy’s games is/should be an anachronism in this day and age, but you know what I mean--I hope!)
Posted by M.E. Hydra at 20:40