Robert E. Howard’s Conan the Barbarian is one of those characters where you think you know who they are, but then you realise you only know the caricature of who they are. I read the L. Sprague de Camp-padded out paperbacks when I was a young lad because they were cheap and had lurid covers with warriors fending off snakes the size of double-decker buses. I came back to Conan because I had an idea for a story where the classic muscle-bound cliché of a barbarian is easily outwitted by one of my succubi. 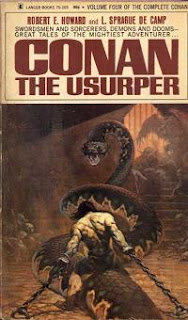 However, Howard’s Conan is a completely different beast. Multi-lingual, well-travelled, whip-smart, adept tactician; he’s a lot more than a dumb beast with a big sword. Despite this, Conan still manages to be in significant danger in most of his stories. Howard’s Hyborian world is a dark and dangerous place, filled with hostile tribes, dark magic and the occasional Lovecraftian abomination. While Conan is freakish by normal human standards, he needs to be to survive in that world, and often only does so by the skin of his teeth.

The books I remember were padded out into paperback novels by de Camp. Howard’s original versions were stories that appeared within the pages of Weird Tales. With the exception of The Hour of the Dragon (which is still on my to-read list), the stories are all novella length. Despite the brevity, Howard managed to pack a lot of story in each tale. Given the doorstop-size of most fantasy epics nowadays, it’s astonishing to think one of the grandfathers of the genre managed to build his lushly detailed world within the slimline pages of magazines. And Howard’s world broods. Each paragraph sweats atmosphere and menace.

I believe most of Howard’s stories are out of copyright now (tragically, he committed suicide at the young age of 30). I accessed them through Project Gutenberg Australia here. Well worth a read to appreciate just how good the early pulp masters were.

As for my own muscle-bound expy, well you can see how they get on in my forthcoming collection, A Succubus for Freedom.