A Succubus for Freedom: Out Now!

You can’t escape . . . You won’t want to escape . . .Succubi and other monstrous femme fatales abound in M.E. Hydra’s fourth collection of wild, warped and wickedly dark erotica. Lie back and enjoy as alluring sirens ensnare helpless prey in thirteen weird tales of sex and horror. They'll give you pleasures beyond your wildest dreams, and terrors beyond your darkest nightmares . . . 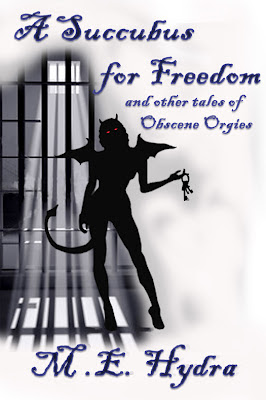 A Succubus for Freedom
Exile
Guard Duty
Don't Fuck the Flowers
The Biggest Tits in the World
A Night at McHooligans
Barbarian vs. Succubus
Onychophoral Dreams (The Soul Worm II)
Naga Massage Review
Come on the Candle
What Bad Boys Get For Christmas
Riding the Medusa
Locked in with a Succubus

Some of the titles will be familiar, but I managed to boost the original story content up to nearly half. Six of the stories are brand new and only appear in this book. I also modified a couple. "Locked in with a Succubus" should now have an ending that makes more sense. "The Biggest Tits in the World" is actually my lowest rated Lit story, partly because of some scale issues in what happens. No problem - Lovecraftian Geometry to the rescue!

The six brand new stories feature the stone tablet succubus being thoroughly evil in a hefty 11K word novella (if you like your demon girls BAD, you'll really enjoy this), the Robert E Howard 'Conan' homage I mentioned in previous posts, something a little experimental with some lush descriptions of hell, an odd succubus summoning rite with candles and smoke, and two Hell-space stories featuring some bizarre (and sexy) monster girls.

Why are the chapters for "Locked in with a Succubus" alternating with the other stories instead of in one place?
Originally it was a weekly serial and I wanted to preserve that feeling of having a 'pause' between each chapter. It's one of those things that might work or could suck. It wouldn't be any fun being independent if I couldn't do the odd bit of experimental craziness now and again...

The book can be found on amazon, and in amazon UK (where no one actually reads me, which is ironic considering they're the only people that might understand some of my more obscurer references! :) ). It's also on B&N, smashwords and also directly from eXcessica's own site. I even put it on various romance fiction sites, because that's where we upload books, although I pity the poor person downloading it in search of fuzzy paranormal romance.

I hope everyone enjoys it anyway. Sorry it was so late coming out. It does mean I can now finally get back to Succubus Summoning 201, another project I've fallen a little (okay a lot!) behind on. I would love for people to leave reviews, but appreciate that amazon's insistence on real names might make that unappealing for some people. Please feel free to let me know what you think in the comments below or even email me directly at manyeyedhydraATgooglemail.com. The same for any suggestions. I can't guarantee I can satisfy all of them, but I don't mind tweaking scenarios to cater to specific fetishes (especially ones I haven't got around to covering yet) or even tweaking character descriptions if there's someone/thing you'd like to see in a story.