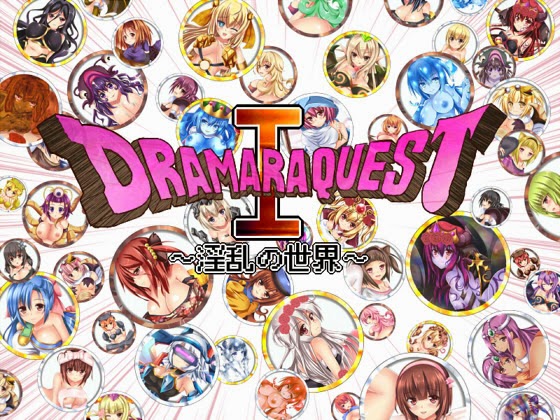 Dramaraquest takes various iconic monsters from the DQ franchise and boobifies them into sexy monster girls.  It’s another battle-fuck game, so combat is about getting stuck in with your willy and trying to make the girl come before you do.  The monster girl artwork is pretty good and like both ROBF and Tokyo Tenma (all the JRPG franchises are getting the full porn-parody treatment it seems) the game utilises simple CGI distortions (jiggedy jiggedy) to give the illusion of animation.


Fellow strugglers with Japanese kanji will be glad to note it is nowhere near as complex as ROBF.  Levelling up is straightforward – your attack and defence improve, making you able to take on previously impossible-to-defeat monsters and enter new areas.  Combat is also straightforward.  You start as a hero sent on a quest to find a missing princess.  At the tomb of a former hero you find two spells – one takes monster girl’s clothes off, the other restores healthy/potency – and then set off to battle-fuck various boobified monsters into submission.

Monster girls appear on the map and in dungeons as black clouds (bosses are indicated with a crown).  After defeating them an icon appears over their head, so the player can avoid them if they don’t want to go through the same fight again.


There’s also a special area in the castle where the player can refight (read fuck) already defeated monster girls.


Despite being another RPG-make clone requiring key items to be found to unlock areas, it’s mercifully simple.  The only area I really got stuck on was failing to spot one of the corridors in a locked area of the northwest town led off-screen to a dungeon.  Other than that the game is relatively straightforward.

Along with the various semi-naked monster girls there are a number of town NPCs to seduce/be seduced by.  Some of these supposedly correspond to characters in the DQ series.  A couple of these encounters even reference DQ’s legendary puff-puff attacks in a more . . . ahem . . . direct interpretation.


For a while I thought I was going to rate this even higher than ROBF.  The fight artwork is better and they make better use of the limited animation.  Unfortunately, as I went deeper into the game the lack of variety in the monster designs became more glaring.  Most of the monster girls have only two attacks and there is heavy use of palette swapping.  This might be fine if you like a particular girl but would rather her hair was blue, etc.  For me I like to push on into new areas to see what new monster girls are revealed.  Reaching the final castle and realising all the new enemies aside from the final boss are palette-swapped versions of girls already seen before is a little disappointing.


Overall it’s not a bad game.  It’s not as frustrating to play as some RPG-maker clones, but it’s also a little short and lacking in variety compared to similar games.
Posted by M.E. Hydra at 22:59