The Violated Hero 5 playthrough continues.  The usual rules apply—it’s a very naughty game, so don’t bother complaining to me if you see something that makes your eyeballs bleed.

Last episode was a rather long interlude where the end of game bosses introduced themselves and Ariel taught Luka-clone some magic using the unusual technique of stamping on his cock until white stuff leaked out.  Now we’ll get back to the game proper and head off to World 2.

World 2 is home to the slime girl boss and looks like a big marsh or lake. 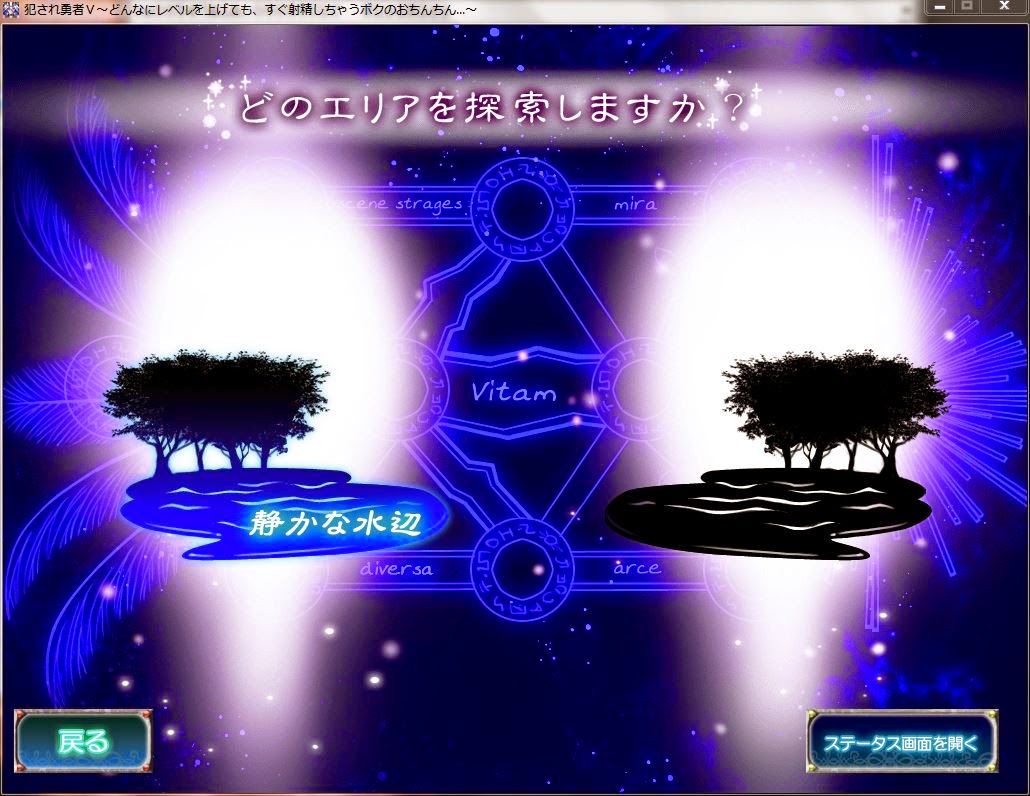 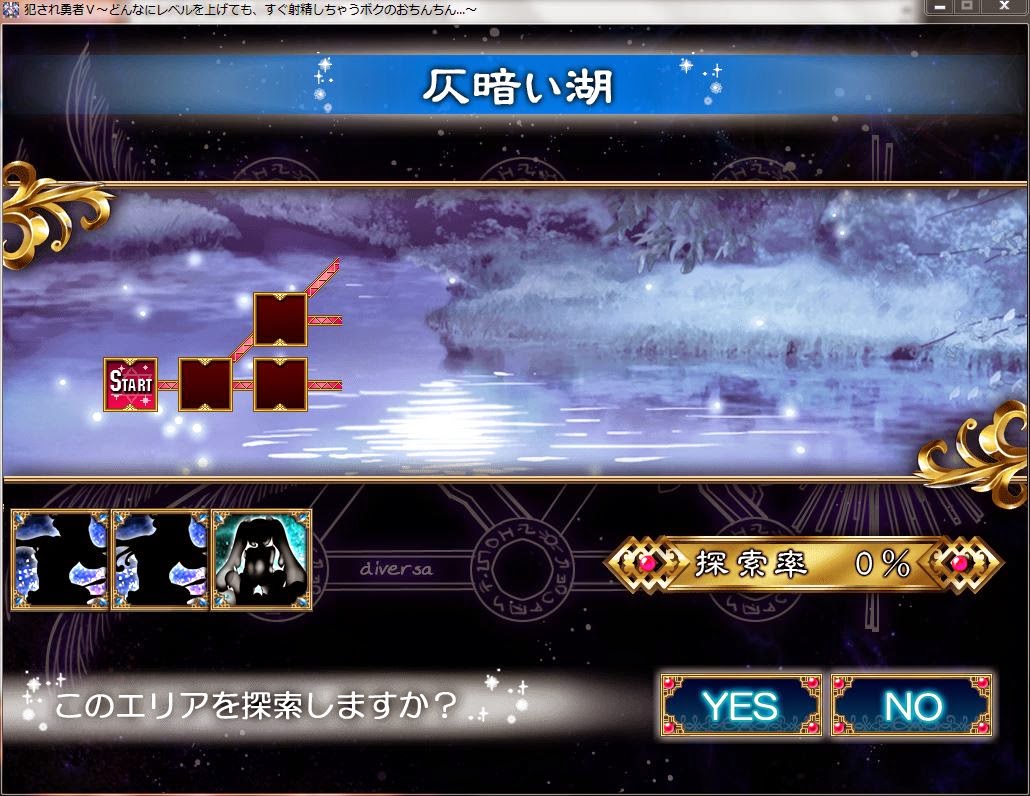 The wandering mooks are also some kind of slime girl.  They’re also a vast upgrade on the misery mushroom munchkins of the forest world.  Meet Lara . . . 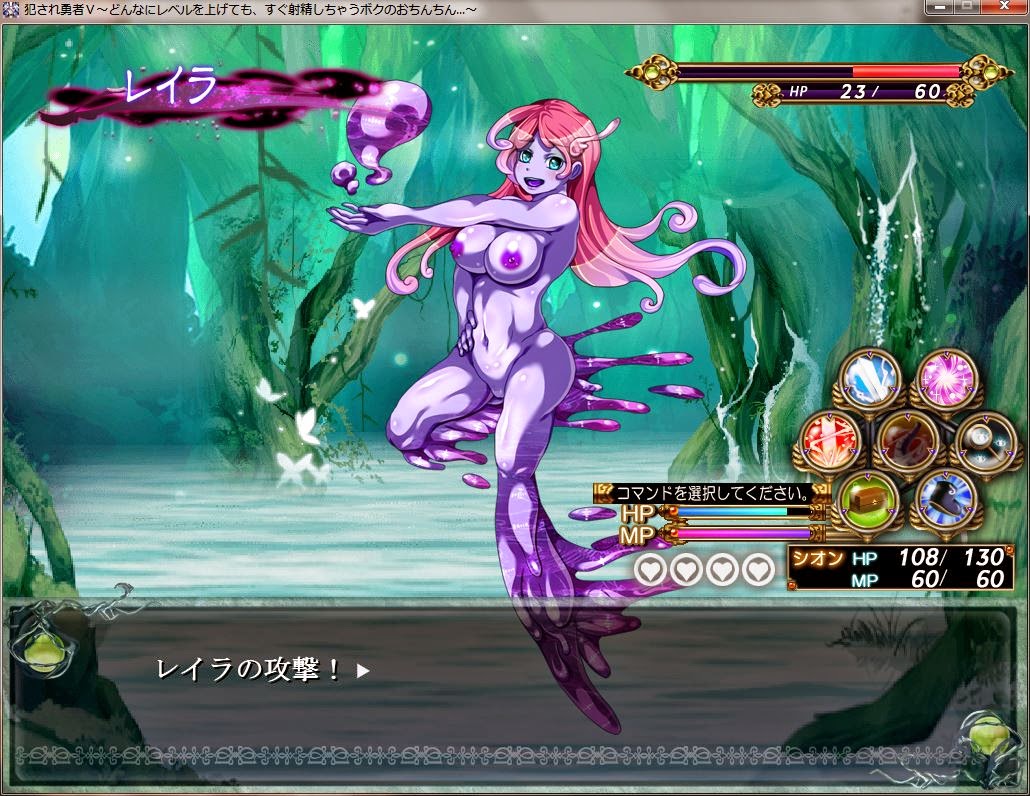 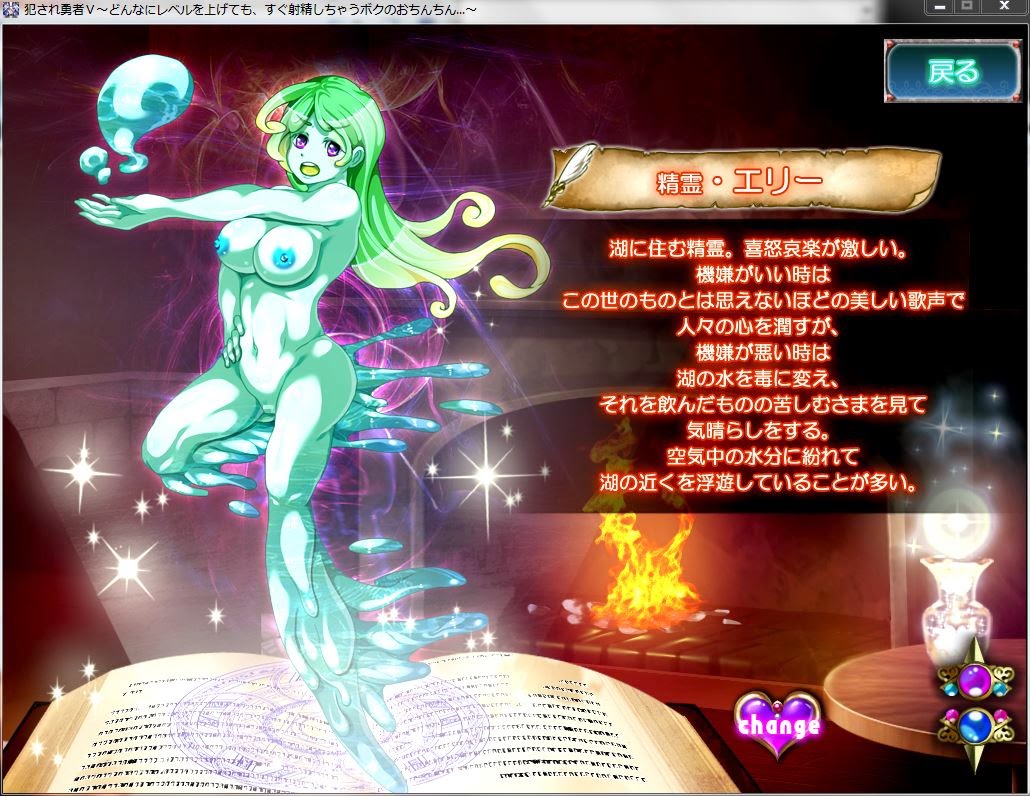 Ariel’s divine protection turns out to be fairly handy as the new special attack takes out most of the Laras and Ellys in one or two hits.

Disappointingly, there is no slime mini-boss like last world’s Lily in this world.  Stage two is a straight runthrough to the slime boss.

We end up at a beautiful lake and while Luka-clone is admiring the beautiful view (and being mocked by Ariel for it) a big blob of goo crawls out of the lake.  It morphs into the form of a beautiful girl.  This is Mel Alice and she rules over the marsh/lake world. 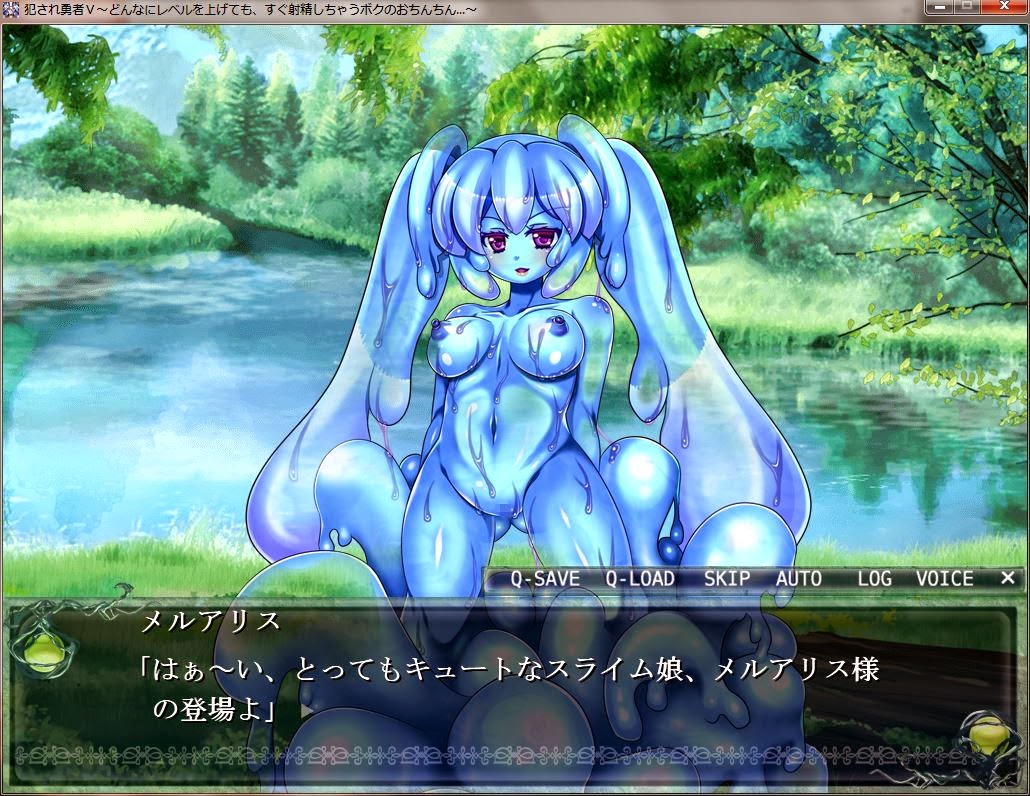 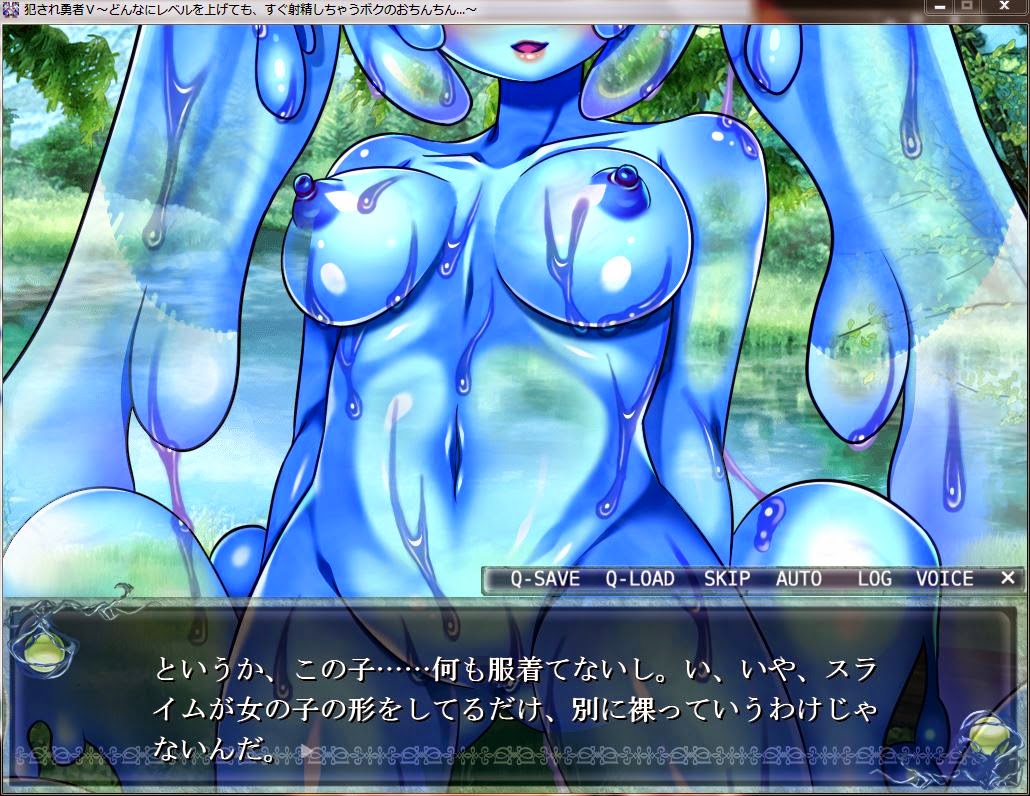 As before, I make a save point before the fight with the intention of going back to it for the Bad End.  I faf around in the fight and waste most of my potions until I remember Ariel taught me a nifty new special attack.  That ends the fight in Luka-clone’s fight fairly swiftly.

But this isn’t the point of Violated Hero, so—sorry Luka-clone—time to rewind and trigger the Bad End.  During the fight I notice they’ve changed the sprite for generic slime sex attack so it no longer looks like a curtain of snot.  Still doesn’t look like anything I’d want on my dick, though.

Luka-clone hits the floor and it’s time for Mel Alice to strut her dominatrixy stuff.  Luka-clone begs Ariel for help.  She buggers off.

The screen fades to black, but before we hit the first scene there’s a bit of dialogue where Mel Alice talks about how livestock should have a collar. 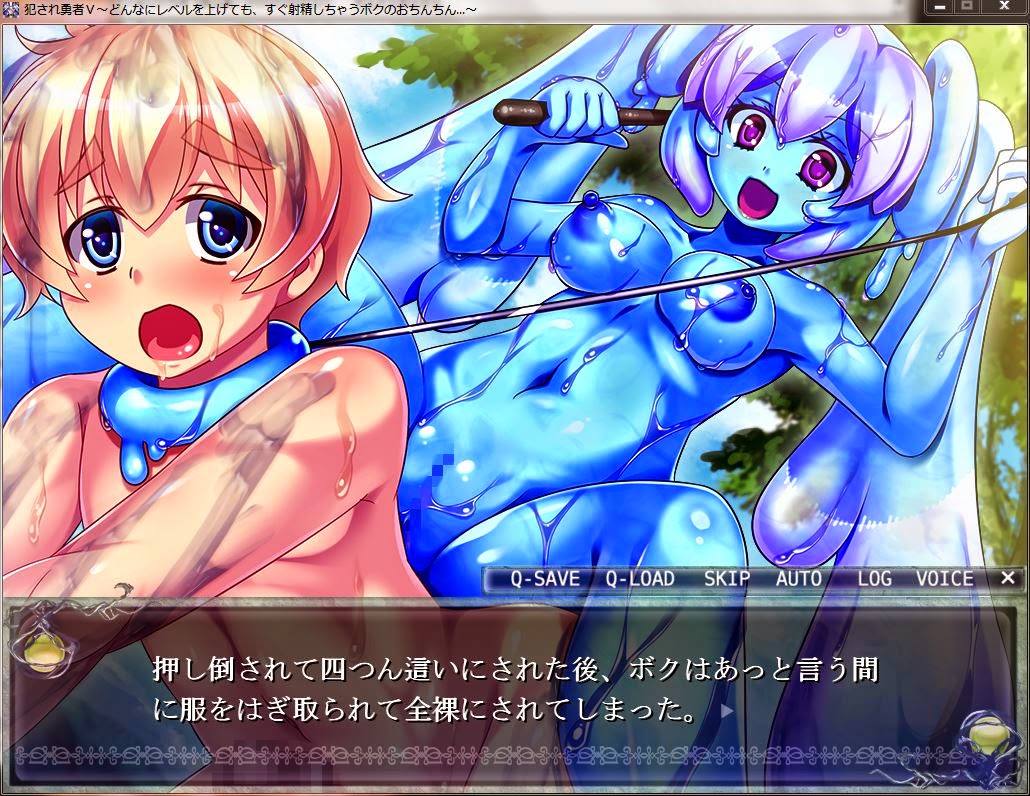 So I suppose this shouldn’t be a surprise.  Giddy up, horsey!

Luka-clone even gets a real ponytail as Mel Alice puts a slime feeler in his ass and waves it around like a horse’s tail.  Hey Luka-clone, you’re a real life brony.

Then the slime feeler ejaculates in Luka-brony’s ass.  Um . . . nice?

Let’s move onto scene two and this is more like it.  Mel Alice enlists a friend, a green slime girl, and they sandwich Luka-clone between them.  With our head on the green girl’s ‘pillows’, Mel Alice grinds away on top. 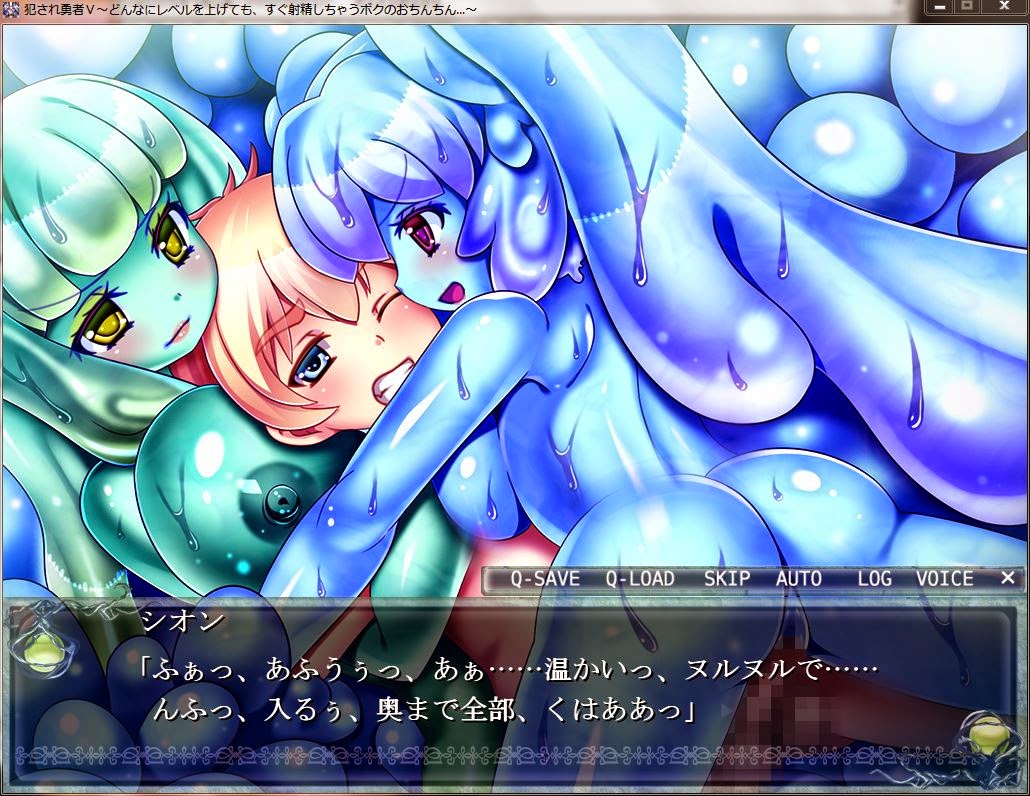 “Satisfy me or be melted,” Mel Alice says.

Uh oh.  Are we about to become Luka-soup?

Unsurprisingly Luka-clone comes too soon.  The two slime girls consult on what our punishment should be and come up with . . . ear violation?

Huh.  Green slime girl extrudes some of her slime hair into Luka-clone’s ears and has a rummage about in the grey matter while Mel Alice bounces away on top.  At least they decide to keep us as a masochist toy rather than melting us.  That’s nearly a good end by Violated Hero standards. 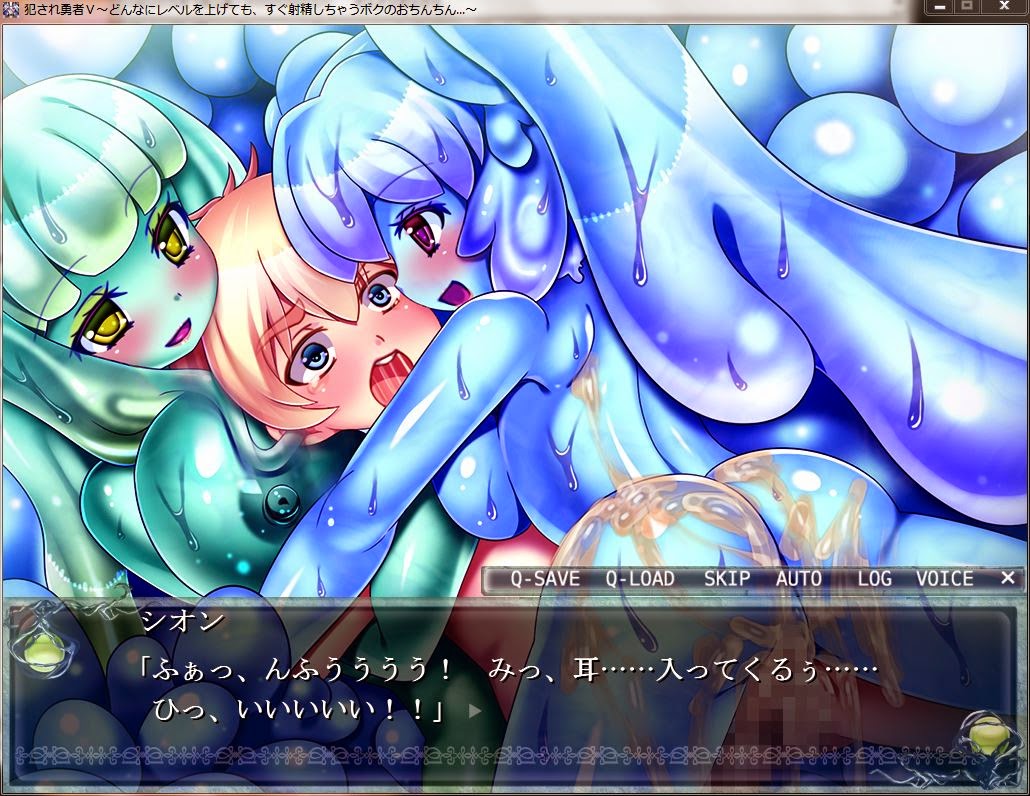 When I did a playthrough for Violated Hero 4, at the end I’d run a comparison between the Bad End scene and one of my own short stories.  As I’ve been a little slow on the new stories front (because of concentrating on finishing Succubus Summoning 201) I guess that means Violated Hero 5 wins by default.  I did, however, put a new slime girl story out in the first half of 2014.

If you liked that story don’t forget to check out these stories as well.  Summoning monster girls into this universe for . . . ahem . . . research purposes doesn’t come cheap.