Another Look At: Monster Girl Dreams

I blogged about this game last year, then forgot about it for a while.  It was while checking out some other H-games I remembered it and decided to take a look at how it has been developing.

Monster Girl Dreams is an RPG battlefucker.  It's currently being developed by Threshold and you can find both the game and their Patreon here. 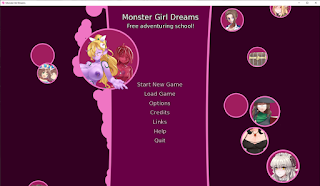 You play a hero that sails off to a land to fight the demon queen, only to find out when he gets there that the land is covered with an enchantment that prevents regular combat and 'fighting' is about fucking sexy monster girls and succubi into submission (or the other way around, if you just wanna have sexy fun times).

It's fairly light-hearted.  Even if you lose, the monster girls and succubi get to have fun with you for a little bit in a pseudo Bad End before you're yanked back to the church in town.

It's still mostly text-based, but what's changed since I last looked is that nearly all the characters have artwork now.  Even though it's just character sprites rather than CGI h-scenes, it does add a lot and they complement the writing well.

Currently the game is unfinished, but has plenty of content.  There are five locations to explore, plenty of side quests and sexy encounters galore.

What makes it stand out to me is the battlefuck combat, and I think this is largely down to the stances system.  Similar to Monster Girl Quest, each of your succubi/monster girl opponents will try to wear down your resistance with a battery of pleasure attacks, but it expands on that with a variety of sex stances that either the player or succubus can lock their opponent into.  This then opens up further sexy moves while in that stance.  It's similar to Succubus Rhapsodia, but without the nuisance cursor-pressing mini-game.  As with Shrift, the most enjoyable 'fights' are those where the monster girl/succubus gradually gets more and more control over the player until they finally succumb to bliss.

Now onto the criticisms and suggestions.

One obvious area of improvement would be to add Bad End H-scene artwork and change the character sprites to give a visual representation of the various stances.  I also think this might be too resource-intensive to be practical.  Similar to Succubus Rhapsodia, there are fights with multiple succubi that usually end up with a variety of stance combos (face sit + sex, boob smother + paizuri, etc).  Representing all that visually would require commissioning a shit-ton of different art, so I wouldn't really expect it in this case.  The text descriptions plus character sprites are already fine.  Anything on top of that would be a bonus.

Other things I wouldn't mind seeing are various quality of life improvements to the interface.  Inventory management is a little fiddly at the moment.  Area exploration uses a 'string of beads' system in that the player travels through a series of encounters and events in sequence (fixed at first and the pre-selected by the player and randomised for subsequent runs after defeating the boss).  It would be nice to see this represented visually (something like Slay the Spire's map or even as simple as what some of the later Violated Hero games did).  Whether it would be practical to do these things I don't know.  I'm guessing the game is being developed on a visual novel creator (Ren'py?) and there are probably limitations as to what can be done with the engine.

Overall, seems pretty damn promising at the moment.  I look forward to catching up with the game again further down the line as more content is added.

(I also need to get off my ass and get my own game project, House of Hellish Harlots, moving again!)