I've definitely been off reservation, so to speak, if it's taken me this long to find out about this one: 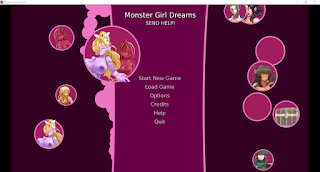 This is Monster Girl Dreams.  It's a (mostly) text-based battlefucker with sexy succubi and monster girls.  It's still in development.  Some of the characters have art sprites, but for the later encounters you currently have to make do with text descriptions only.

And those monster girls have a lot of sexy tricks.  My favourite is probably the succubus kunoichi encountered in the mountain stage.  She has a lot of different ways to erotically drain your energy and different Bad Ends depending on whether she depletes your final point of spirit (which she will) with her mouth, tits or pussy.  A fun encounter and well-written as well. 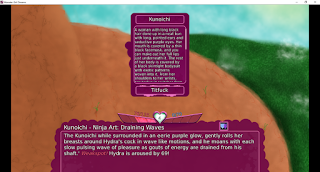 This optional alraune boss at the end of the first stage also has a lot of different moves and is rather enjoyable to fight lose to. 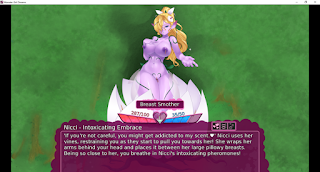 The game is fairly lighthearted in comparison to Monster Girl Quest.  You don't need to worry about some of the nastier Bad End consequences as the main character is equipped with a magic teleport stone to yoink them out of danger before the shrivelled-up mummy stage of succubus draining.

It's still very early in development, but I've liked what I've seen so far.  The free demo can be obtained from the developer's (Threshold?) Patreon and they update their progress on their blog here.

Fairly promising.  I look forward to seeing how this one progresses.