Okay, in this case, by mainstream I mean the sort of non-hentai responsible games you might find on GOG or Steam.

(Yes, I do play those from time to time, to keep the mind ticking over while working on various writing projects.  Darkest Dungeon, yeah!)

MachiaVillain is... what... a Murder Mansion creator sim.  You take control of a bunch of brainless horror-movie minions (psychos, zombies, skeletons, etc) and task them with building a spooky mansion out in the wilds.  Then you lure unsuspecting victims to it to steal their cash and keep your minions well-fed with the victims' brains, blood and body parts. 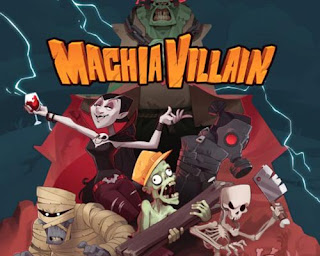 I picked it up a while back because I liked the concept and off-kilter art style.  I didn't really get into it back then.

Then I saw recently they'd added an update (and hopefully a ton of bug fixes!) that included a new monster type - succubus.

Yes, I'm a simple fella.  I check out most games with succubi in them.

So, I gave it a second look (as well as finding a guide to figure out what I'm supposed to do!).  It's a more mainstream game, so don't expect too much smexy from the succubi (I think indie non-H game devs get publicly drawn and quartered on Twitter if they make their succubi too sexy nowadays).


The game is fun.  It's also a bit weird and wibbly with the bugs.  Heads of victims sometimes randomly fly off to the other side of the map.  Sometimes all the walls vanish when you reload.  At least the devs keep to the initial concept.  The one thing that bugged me about the original Dungeon Keeper was the bait-and-switch into another bog-standard RTS slugfest of keeper vs keeper after the first couple of missions.

MachiaVillain could do with... something, though, although I'm not sure what that something is.  Some sort of end-state victory to aim for, maybe.  You do get attacked by escalating bands of heroes ranging from meddling (and easily eaten) kids to quite tough squads of holy templars, but the game does start to run out of steam once the murder mansion is built and up and running.  The beauty of indie games like this is often the devs keep chipping away and adding improvements, so maybe they'll find the solution to that particular puzzle.

I can't, in good conscience, recommend the game as a gem, but I did get some hours enjoyment creating a little bordello of blood staffed almost exclusively with succubi.  Victims would visit and one-by-one be shunted off into hidden rooms, where a waiting succubus would lovingly take "care" of them.