Yesterday (Today?) seemed pretty good on dlsite.com for new releases.  I thought I'd check some of them out.

The Encyclopedia of Tentacles for Boys Vol. 3

This is up to a 3rd volume!!!  We only got 1 of the monster girl one.  And where is Monmusu Quest: Paradox Pt.3?  Goddammit, Japan.

(I doubt anyone is going to play this and then go on to throw kids into the giant octopus tank of their local aquarium in the hope of getting a good show if the octopus is feeling particularly frisky that morning.)

Even without the stupid outrage culture fears, it still falls a little outside my own personal turn-ons.  I like monstrous semen suckers, but I also like them to have tits and a pretty face.

Lost Fragments - An Otoko-no-ko is Given Status Effects, Reverse R*ped, and Defeated 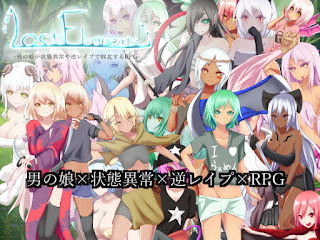 I liked the demo enough to pick up the full game.  I've played a couple of games by this circle before.  They like having their monster girls bury the player in various sexy binds and negative status effects.  Fortunately, I was able to get machine translation back up and running for this one, as trying to navigate the combat blind is a little tricky.

Fighting is turn-based RPG-style with a heavy focus on binds and negative status effects.  So much so the player has separate buttons depending on whether the adverse status effect is physical (binds) or mental (increased sensitivity) in nature, and can use either as an additional free action every turn.  The status changes are also visible on the player's sprite on the left of the screen, which is a nice visual cue to show just how much an arachne or slime girl has slimed you up.

(The player character's odd appearance is explained in-game.  You play a male gamer transported to a game world with only female character models (for both the NPCs and monsters), hence the feminine appearance.  (The main character is quite relieved to find all his other... ahem... faculties are fully intact.  The monster girls he encounters are arguably even more delighted about it!))

During combat, the monster girls also have an additional 'absorption' move they can use when the player is naked.  This switches the display to a H-scene and a sub-game where the player has to mouse-over various pink hearts to break out.

Without machine translation, this would be a hard pass, but now I have something that appears to work (more on that in a future post), the game seems like good sexy fun.  Mind you, I am a sucker for being tied up by an amorous arachne, or slimed by a sexy slime girl, so this is hitting all the right spots for me.  I'll try and get around to posting a full review at some point in the future. 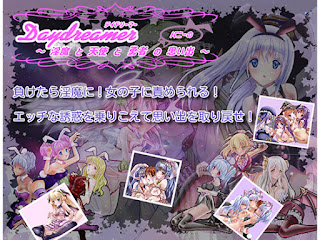 This looks like another of those strange games that looks like an RPGMaker type RPG, then ditches all the stats for simple action.  In this case you run around firing magic bolts at succubi.

The plot seems to be set just after the hero has defeated the main demon king.  Somehow this has opened the way for succubi to invade and they steal power by attacking people through dream states created from their memories.

The demo doesn't show much more than the angel scene.  Which is a pretty good scene.  The other art on the store page also looks okay.  I suspect this might be one of those games that consists of nice H-scenes strung together by some very rudimentary and forgettable action game mechanics.

I'm on the fence on this one, but I wouldn't be surprised if I pick it up at some point.  The promotional artwork teases some nice slime girl scenes and I do love being erotically glooped by a sexy slime girl. 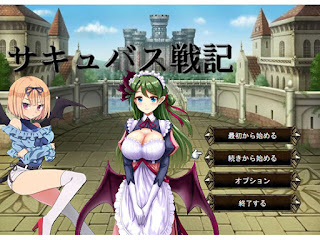 This one came out a couple of days earlier.  The thread on ULMF calls it Succubus Senki, which I'm guessing is a more literal translation of the title.

I'm not sure what to make of this one.  It looks a more tactical-style RPG.  I saw it described as being like Advance Wars, but I never played that series.  Which is unfortunate, as some knowledge of this type of game might have helped me try to work out what the hell was going on in the demo.

You have a hero and two support guys.  You move them to attack a skeleton dude with a couple of (regular) slimes in tow.  Then a bunch of succubi show up, and your dudes... uh... lose.  Then there's a reasonably pleasant animated paizuri scene of you being drained by a succubus afterwards.  Given how easily the succubi wiped my party, I figured this was the typical auto-loss scenario to kick off a campaign.

Wrong.  The succubus dry-fishes the hero with her big bouncing boobs and it's Game Over.

I saw enough to be interested, but also enough to scared by the complexity.  I think this might be fun to play, but probably needs some basic translation of the interface beforehand.  I'll probably wait to see if one of the lovely volunteer translation teams out there thinks the game is good enough to work on before diving in.
Posted by M.E. Hydra at 22:21