Bit later than intended on this one.  Chez Hydra is still fairly chaotic at the moment, unfortunately.

First, a disclosure.  I didn't make it all the way through this one, although I think I played enough (all but maybe the last one or two sections) to give a fair(ish) review.

With that out of the way, let's get onto the game. 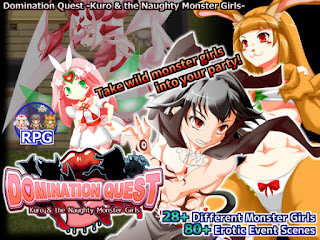 Domination Quest: Kuro and the Naughty Monster Girls is the new hentai game from Kokage no Izumi.  This is the circle responsible for the Demon Angel Sakura series, and Domination Quest has similar themes and humour.  The main difference is the switch in genres from action platformer to JRPG.  Weirdly, rather than use RPGMaker like everyone else, they chose to build something resembling a RPGMaker game in Unity.  This might just be the most Japanese indie dev thing ever, but to be fair, later in the game they do make use of the 3D backdrop to do things not easily done in your typical RPGMaker game.


You play Kuro, an incubus-type creature with the ability to shrink opponents down and swallow them into his butt with his tail.

(Just roll with it.)

This doesn't consume the swallowees, but instead transports them to a mystical playground where you form contracts with them to add them to your team.  It might sound weird, but mechanically it's a pervier take on pokéballs.

The story has Kuro hitting adulthood and then heading off adventures with his succubus(?) companion, Shiro.  She gets abducted early on by another mysterious dominator and the quest is on to both get her back and stop this rogue group from stirring up tensions between monsters and humans.

Domination Quest is not really a battlefuck game.  Most monsters use regular attacks and you get a regular Game Over if the party wipes.  There are a few encounters where the monster girl grabs Kuro and the rest of the party has to break him free before the monster girl sexually slurps up all his energy.  I did enjoy those fights and wished the game had more of them.


The H-content is mostly gated behind an affection system.  As with Monmusu Quest: Paradox, scenes are unlocked by raising affection with your chosen waifu.  Also, as with MQ:P, not all of those scenes are good for Kuro…


One of the ways to raise affection is through the game's skinship system.  This is sort of the equivalent of walking hand-in-hand with your waifu (where hand-in-cleavage might be the mildest version of it) and is shown as a little animation on the right of the screen while you're exploring dungeons.


The H-content is pretty good and animated, but not quite to my taste.  As with Demon Angel Sakura, the themes lean heavily on vore, giantess and gross-out humour.

(the reveal of where the delicious pink slime comes from is both very funny and unspeakably unspeakably euwwww!)

What killed the game for me were the bugs and too-frequent combat encounters.  The game was very unstable on release.  So much so that one of the paths in the first area was completely inaccessible because the entry and exit points were set to the same point, looping the player back to the screen they'd come from.  After that I didn't seem to have many problems until I hit the later forest area, and the game got very crash-happy.  The frequent combat encounters exacerbated this and made later exploration extremely tedious.  They trigger randomly as you walk through an area (like the old Final Fantasy games) and occur very very frequently.  Like, every few pixels frequently.  While this is a feature of this type of game, I really think the developers dialled the frequency too high.  The foggy area with the fox was the finisher for me.  Trying to explore a shifting maze with a combat encounter going off every couple of steps.  No thanks.

Hopefully this will be something the devs patch or fix in future versions.

Overall, despite the shift in genre, I think my recommendations are the same as for the Demon Angel Sakura series.  If you like Giantesses and Vore, this is worth checking out for the H-content (even if you have to grab a 100% save to avoid struggling through the later dungeons).  For general monster girl lovers, a maybe.  The H-content is nicely done, the humour is entertaining, but the game itself is wretchedly unfun to play, unfortunately.


Despite the problems, there were a few monster girl designs I liked.  My favourite was probably the Carnivorous Plant Girl and she did give me inspiration for a new short story.  Even with all the other problems, if I can get a story idea out of a H-game I normally consider it a win.

Okay, second favourite design.  I really wanted to have some fun with this aphrodisiac goop flinging slime girl, but it looks like we're going to have to wait for a future Chapter 2 to get erotically glooped by her.
Posted by M.E. Hydra at 01:42