My interest as a writer is the potentials of the scenario and getting an ear for the dialogue.  Especially as the setting is Thailand, a country known for having an active sex industry (and therefore a good setting for my type of erotic horror story), but not one I've actually visited (I hope this wasn't too obvious in my recent story "Number 66").  While I've been toying with adding annoying SJWs to my roster of asshole victims, the old standby of oafs being oafish to sex workers and getting their (disproportionate) comeuppance at the hands of sexy succubi is always fun.  Work out what interesting forms the succubi take when they reveal themselves and hey presto, instant manyeyedhydra story.

Now that's the obvious route a story like this can take, but then the little black cells started to spark and think about other options and pathways.

The one thing modern mainstream media is very good at is omitting context, especially context that gets in the way of establishing a juicy narrative guaranteed to whip the audience up into a forth.  Context is the bigger picture that might show the events being witnessed in a different light.

In this case we have a minute and a quarter of some guys indulging in an orgy with some working girls and making a lot of degrading and derogatory remarks about their (I'm assuming) paid-for-escorts.  Now, the thing is, if you took any random minute and a quarter of a dom roleplaying with a sub, it's going to make the dom look like an asshole.  And if you want to, you can likely take any random small slices of someone's life and stitch them together in a configuration that presents the person in any way you choose to present them.  Reality TV shows run off this chicanery.

That's the fun part of playing what if? or devil's advocate.  What the storyteller initially presents to the audience might become more complex with future information.  It can be rewarding to veer the story off down a path the audience was not expecting.  It's great if you can switch the audience's perception of a character and maybe have them hoping for a different ending than the one they were expecting.

As a should-be-obvious postscript, I hope people aren't thinking I'm attempting to defend the real-life people caught up in this scandal.  Sometimes people are assholes that hire women for sex, treat them like shit, are found out and then punished accordingly.  Sometimes there's no more to the story than that.  (Although it goes without saying - modern mainstream media is not very trustworthy.  Always leave yourself open to the possibility there might be more to the story than the narrow slice you're being fed)
Posted by M.E. Hydra at 11:00 11 comments: 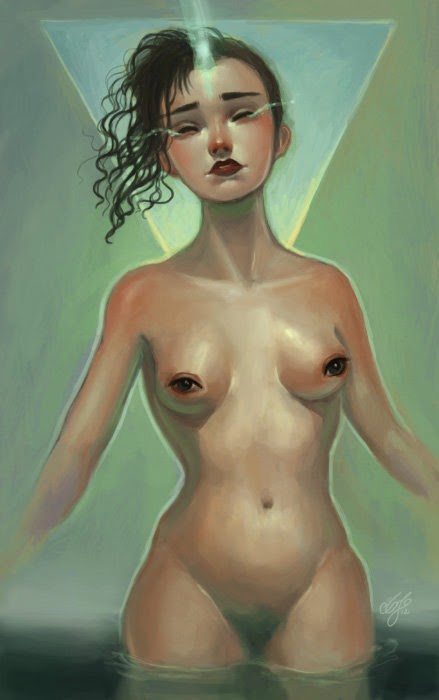 If it sounds vaguely interesting, I can write some more where-did-that-idea-come-from pieces for the stories I've written (assuming I can remember, some are a few years old now).  Let me know in the comments below if there are any you're curious about.
Posted by M.E. Hydra at 06:04 7 comments:

For most of last year I used the #DailyWriting tag on twitter as an aid to writing.  I set a target of either typing at least 500 words or handwriting 3 notebook pages a day (roughly 1-2 hours of writing).  Before going to bed I'd tweet the word/page count.  I doubt the people of twitter cared either way, but having the illusion of witnesses was a good way to keep me honest.  It was a good discipline aid.  One of the best tips for writing is to make it a habit.  Once it becomes a habit it's a lot easier to keep the words flowing and a few pages every night eventually pile up into a full novel.

I stopped doing it earlier this year.  A big part of that reason was because I'd become pissed off with twitter and all the self-righteous, holier-than-thou jerks that stink out the place.  It was also because I was worried it had become a creative straitjacket - that I'd end up joylessly grinding out a bare minimum of useless words every night because of trying to keep to arbitrary targets.

I was also worried about how it would look on my twitter feed.  Posting word counts is often sneered at as something those vulgar self-published types do.  It's just not the done thing.

By the way, that reason above is without a doubt the stupidest reason of the lot.  A quick check of most of the more vocal, sneery writery types on social media will reveal them to be rather light in the publishing credits column.  Give those characters a wide berth (and most online writing communities in general, though there are exceptions) and your muse (and readers) will thank you.

Anyway, I decided to stop using the #DailyWriting tag.  I was getting the pages done anyway and there was no need to bore the world with the proof.  Then indiscipline crept in.  A couple of weeks ago I was off work and had a good writing week where I finally burst through a Succubus Summoning chapter that had been blocking me for a while, as well as finishing off another short story that had been clogging up the tubes for a bit.  Then the following week I was a lazy cunt and barely got anything done at all.

After that I decided to resurrect the #DailyWriting tag.  I'm a shameful procrastinator.  Once I start writing I can normally clock in a good hour or two.  Starting that first hour and not bumming around on facebook or youtube is the problem.  It's surprising how much difference a little tag can make.  When I stopped using it I'd have those nights where I'd fart around until the clock ticked past midnight and then think, fuck it, it's too late.  The first night I decided to start using it again the same thing happened, but instead of going to bed I thought, no, let's get those 3 pages written first.  Sometimes a little psychological push is all that's required.

So the #DailyWriting tag is back and you can follow my feed here:
https://twitter.com/manyeyedhydra

It also has the nice side effect of reassuring people I'm still alive and writing during those periods when this blog goes quiet.  I know a few people were concerned about that given the shit that went on earlier in the year.  It should also give an idea of what I'm working on currently and how far along I am.  (The next chapter of Succubus Summoning needs a further 2.5-3K words typed up and a full edit before posting).
Posted by M.E. Hydra at 05:03 15 comments: